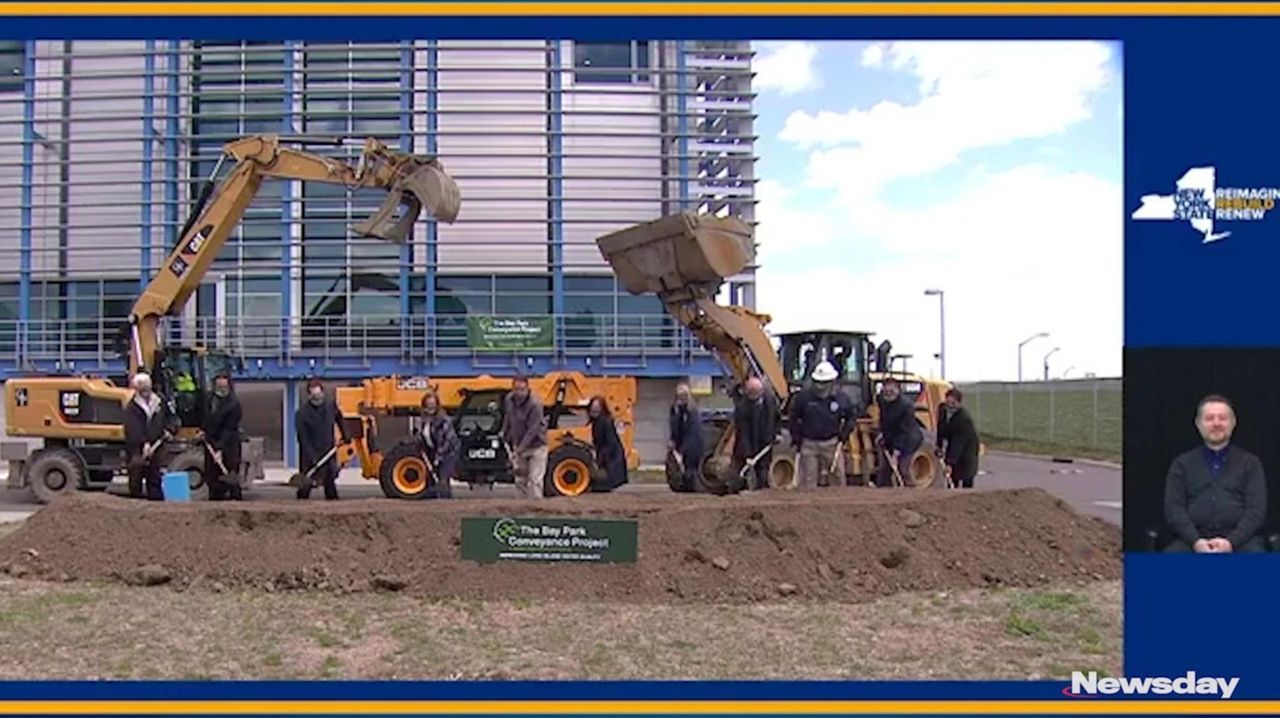 On Thursday, Gov. Andrew M. Cuomo and local officials held a ground breaking at the Bay Park Sewer Treatment Plant in East Rockaway. The three-year $450 million project is designed to transport sewage out of Reynolds Channel and pump it into the Atlantic Ocean. Credit: NY Governor's Office

Cuomo, joined by state officials at an event closed to the public, kicked off construction on the 3-year project that redirects sewage 11 miles under Sunrise Highway to Cedar Creek in Seaford and then to a three-mile outfall pipe into the Atlantic Ocean.

Officials said the project would help restore 10,000 acres of water and tidal marshlands from Atlantic Beach to Point Lookout, which could return the bays to fishing and recreation while reducing coastal flooding.

Cuomo called the Earth Day groundbreaking "a project to make a difference for generations." The governor said the only alternative was to pump the sewage north from Bay Park. The Bay Park plant, which serves one million residents, was flooded after Superstorm Sandy, causing $830 million in damage.

Once completed, the project will divert 55 million gallons of treated sewage pumped daily from Bay Park and remove 95% of nitrogen being pumped into the Western Bays along the South Shore.

State Sen. Todd Kaminsky (D-Long Beach) said residents could see the results of cleaner water in the next 5 years, once the project was completed.

"While this project is the most transformative environmentally in the history of Nassau County, it is also local," Kaminsky said. "Since the 1950s that effluent has poisoned the Western Bays."

Kaminsky cited the Jones Beach sewage outfall pipe at Zach’s Bay to show how water could be restored for boating and fishing after sewage was diverted to Cedar Creek nearly a decade ago.

"Zach’s Bay took advantage of the outfall pipe and the water became clearer and life returned. It’s an example of how technology works," Kaminsky said. "You can look at a dead ecosystem and ask is it worth trying to fix and it worked."

The state and the Department of Environmental Conservation selected the contractors for the project, which uses $460 million in Nassau County bonds and $830 million in grants to rebuild the Bay Park plant.

Nassau County and Long Beach also are spending nearly $80 million, using $66.4 million in county bonds, to build a pipeline and a pump station to transfer 5 million gallons of raw sewage per day to Bay Park, before it is diverted to Cedar Creek.

Adrienne Esposito, executive director of Farmingdale-based Citizens Campaign for the Environment, said the governor was fulfilling a promise to restore the bays and improve water quality.

It was not "too late to save the Western Bay," Esposito said. This project will bring back the health, productivity and beauty of the bay and "give us in the future what we lost from our past,"