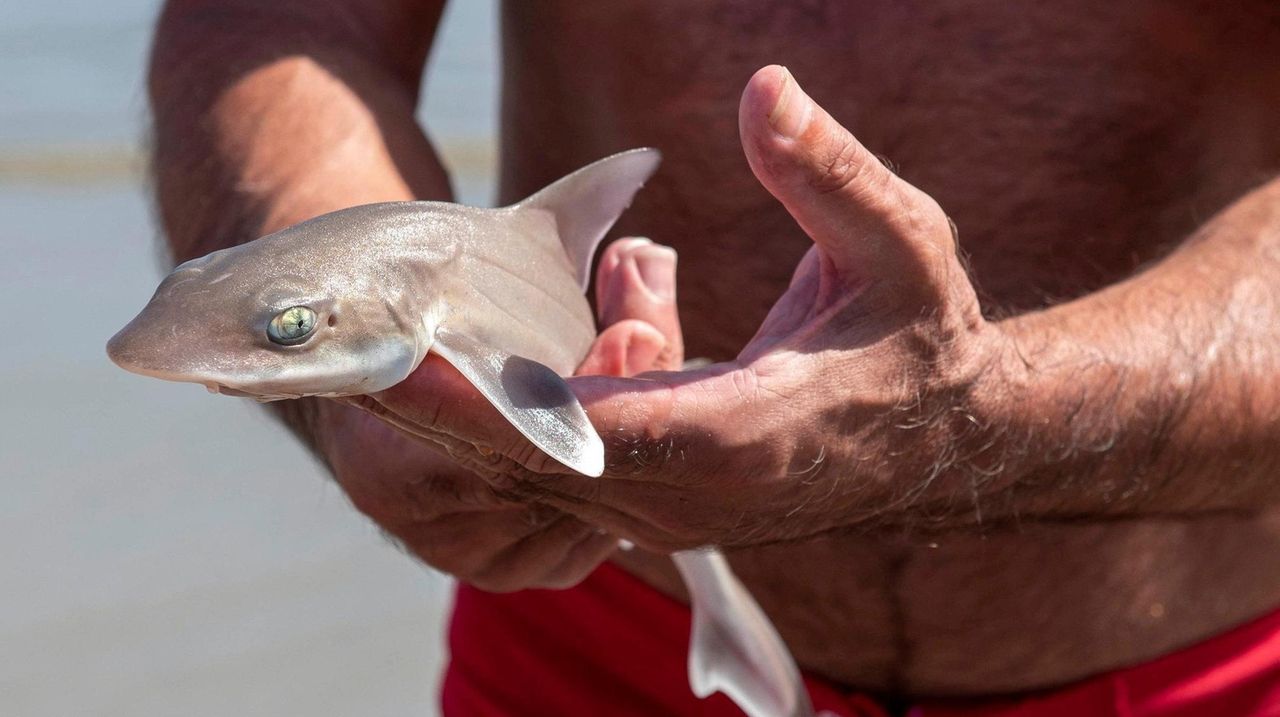 Summer 2020 was rife with shark sightings. An expert on Monday said while some sharks are likely to be spotted this summer, it isn’t likely to be like last year. Newsday's Cecilia Dowd reports. Credit: Howard Schnapp; File footage; Photo Credit: Howard Simmons, Universal Images Group via Getty

After a flurry of shark sightings on South Shore beaches last year, experts are divided on whether more sharks are swimming in the waters off Long Island or if more people are on the lookout for the predatory fish.

Last July and August, experts said nearly twice as many sharks were reported, with at least 20 shark sightings off beaches between Long Beach and Jones Beach, including at least one of the larger and more aggressive bull sharks reeled in by a shore fisherman.

Although sharks in the Atlantic are not unusual, what is different is many reports last summer of more sharks swimming closer to shore and larger schools of bait fish in warmer waters off Nassau County.

It's unclear exactly how many sharks are in the waters off Long Island and New York City because the ocean is such a concealing environment, said Hans Walters, a shark biologist and field conservationist for the New York Aquarium.

"The reason everyone is seeing sharks is everyone is looking for them," Walters said "Sharks are migrating up the coast as they have for millions of years. The Atlantic Ocean is like the plains of Africa, but instead of lions, there are sharks, whales, dolphins and hundreds of schooling fish. It’s nothing new."

While shark sightings have increased, human interaction with sharks remains rare. Since 1837, only about a dozen shark attacks have occurred off Nassau County and the metropolitan area, officials said.

Two children suffered minor puncture wounds off Fire Island in 2018, and DNA was used to identify a tooth from a sand tiger found in a boy's leg. Other possible bites by unknown species occurred in New York State in 2015 and 2017, according to records from the Florida Museum of Natural History.

But officials took precautions last year and are prepared to do so this summer to pause swimming at South Shore beaches if any sharks are spotted between Long Beach and Jones Beach.

Last year was one of the first confirmed sightings of a bull shark off Long Island, deemed incredibly rare and native to warmer waters off Florida. The blunt-nosed shark, spanning 6 to 10 feet, can feed in warm, shallow waters and be more aggressive than the more docile sand tiger sharks native to New York waters.

Shore fishing of many sharks is illegal due to their protected status. Shark fishing has decimated some of its population, Walters said. Last year, Long Beach had to discourage fishermen from chumming the water off jetties to attract other larger fish.

No sharks have been spotted off the coast this year, but water temperatures are still hovering around 60 degrees. Last summer, water temperatures peaked in the low 70s, attracting a near record crop of bunker fish located about 10 feet off the shore, along with diving birds and some sharks spotted feeding off the prey commonly used as bait.

The shark sightings by local lifeguards interrupted a limited summer beach season and prompted sporadic beach closures. Nassau County police surveyed the water by helicopter and sent out boat patrols to look for sharks and large schools of fish that may have attracted them.

Long Beach lifeguard chief Paul Gillespie said he had never seen a year with as many shark sightings as the last one.

"Last year was the worst it’s been in 52 years. It seemed like they were coming from everywhere," Gillespie said. "Who knows what will happen if the water warms up. If it happened again, something is changing and right on our shore."

Biologists say it may be too early to tell if the warmer waters are caused by climate change or if last summer was abnormally warm. Restrictions on bait fishing and improved water quality have attracted fish, dolphins and whales off the shore.

The reemergence from the pandemic and more activity at beaches and on the water also could keep more sharks away from shore, said Roberto Alfieri, the senior aquarist and shark keeper at the Long Island Aquarium. He doesn’t expect the warmer breeds like bull sharks to make Long Island their habitat, he said, though they may come up the coast of New York to follow their prey.

"The temperature is getting really high and it forced other animals up here. Some sharks won’t come if they’re not forced to, but if the animals they use for prey move up here, they follow them to keep surviving," Alfieri said.

Sharks are generally not attracted to people as prey and are often afraid of noise and human activity.

'We’re hoping the sharks won’t return and we can return to a normal summer.'

"What is never changing is they are always out there. It’s always good to keep your eyes open and don’t go out too far, but there is nothing special to be afraid of," Alfieri said.

Lifeguards are prepared to monitor shark activity on Jet Skis and to pause swimming if needed.

"The pandemic was bad enough and it was frightening, but we took precautions and we're ready this year," Hempstead Supervisor Don Clavin said. "We’re hoping the sharks won’t return and we can return to a normal summer."

Great white sharks tracked swimming off Long IslandCharlotte, an 8-foot teenager, was tracked east of Long Island Sound, Monomoy, a 6-foot, 7-inch juvenile male, was tracked near Montauk, and 8-footer Martha was located near Trenton, N.J., according to Ocearch.