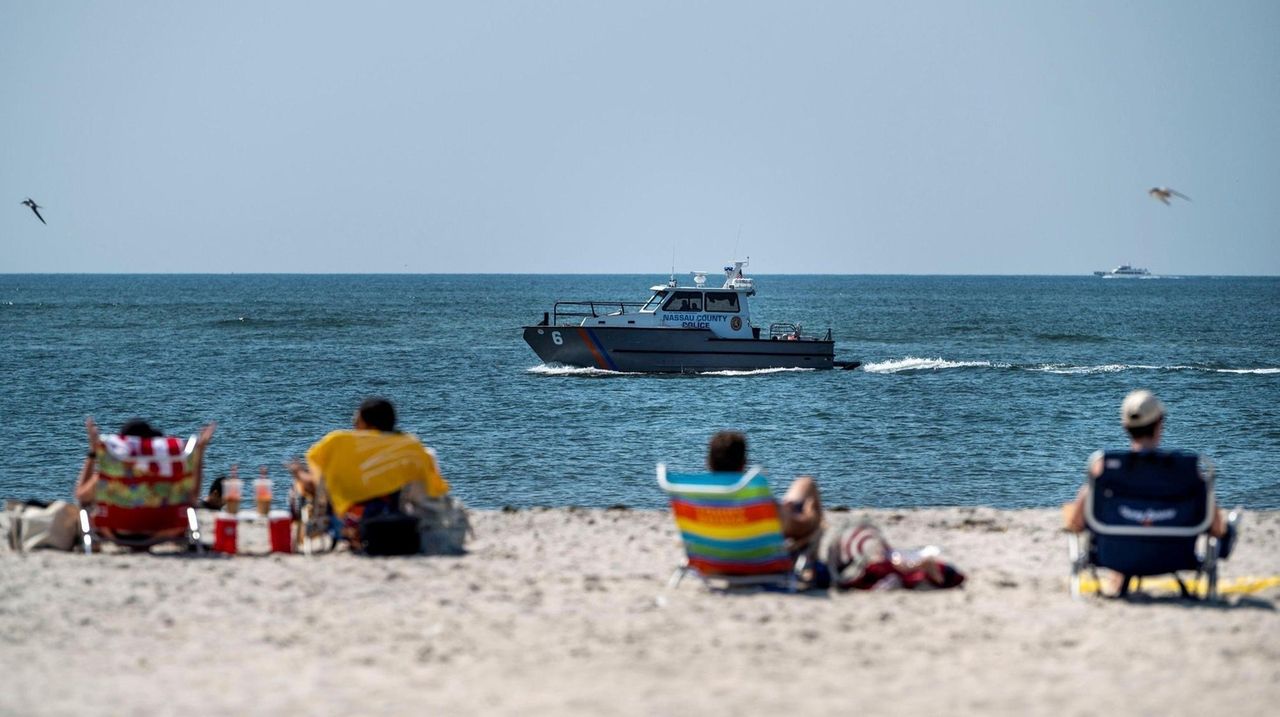 Two sand sharks, about 4 to 5 feet long, were spotted on Thursday "close to the shoreline" off Field 6 at Wantagh's Jones Beach State Park, closing the beach to swimmers for several hours, Curran said at a news conference held at Nickerson Beach in Lido Beach. The beach was shut for an hour or so on Wednesday after another shark, an unidentified species, was seen about 25 yards offshore, she said.

"I want to be clear that the risk of being attacked by a shark is very, very low," Curran said. There have only been about a dozen attacks recorded off Long Island, she said, with the last one occurring in 2018, when two children apparently were bitten off Fire Island.

George Gorman, Long Island regional director, Office of Parks, Recreation and Historic Preservation, said a fisherman caught and released a sand shark at Field 2 on Friday, before other fins were spotted. Swimming was halted a few times, he said, and no one could return to the water until there were no sightings for at least an hour.

At state parks, including Jones Beach, and Long Island's other state beaches drones can be sent up to survey the waters. "We're continually patrolling the beach," he said, "Our lifeguards are always scanning."

Police can be asked to send a helicopter up for a wider search, Gorman said. "We've actually requested the Coast Guard to go out."

A spokesperson for Suffolk County Executive Steve Bellone said in an email: "While there has not been any recent shark sightings at County beaches, Suffolk lifeguards actively patrol for sharks and other marine life on paddle boards, surf boards and jet skis, in addition to monitoring from the shore."

Last year, sharks were spotted near the shore about 20 times — and it began around the same time — July 28, Curran said. "And here we are, July 22nd, and we've already had two."

The marine and helicopter patrols, already active, along with a beach patrol vehicle, will help to make sure people "get out of the water in a quick fashion," said Kevin Smith, Nassau's first deputy commissioner of police.

Telltale signs that sharks may have followed bait fish in toward shore, Smith said, include not just fins, but "activity in the water." The sea might look choppy or the water may be "swirling around." And flocks of birds may be diving down to capture the same prey, he said.

All those signs "may signify a feeding area," he said.

Rob DiGiovanni, chief scientist, Atlantic Marine Conservation Society, a Hampton Bays nonprofit, stressed that the reappearance of sharks — along with whales and dolphins — reveals the oceans are healthier now than 50 years ago.

The Clean Water Act, enacted in 1972, started the crackdown on localities that released raw sewage into bodies of water, beginning the long process of reducing nitrogen pollution.

"I think the most important thing to take away is that we are in a changing environment," he said. "These animals are doing the exact same thing we would be doing; they are foraging for food."

Curran advised swimmers and surfers to follow basic precautions: lone individuals are more likely to be mistaken for prey than if they are in groups, especially around dawn or dusk; and shining jewelry may attract sharks.

"Be sure: between our marine and aviation bureaus, we are on this," she said.