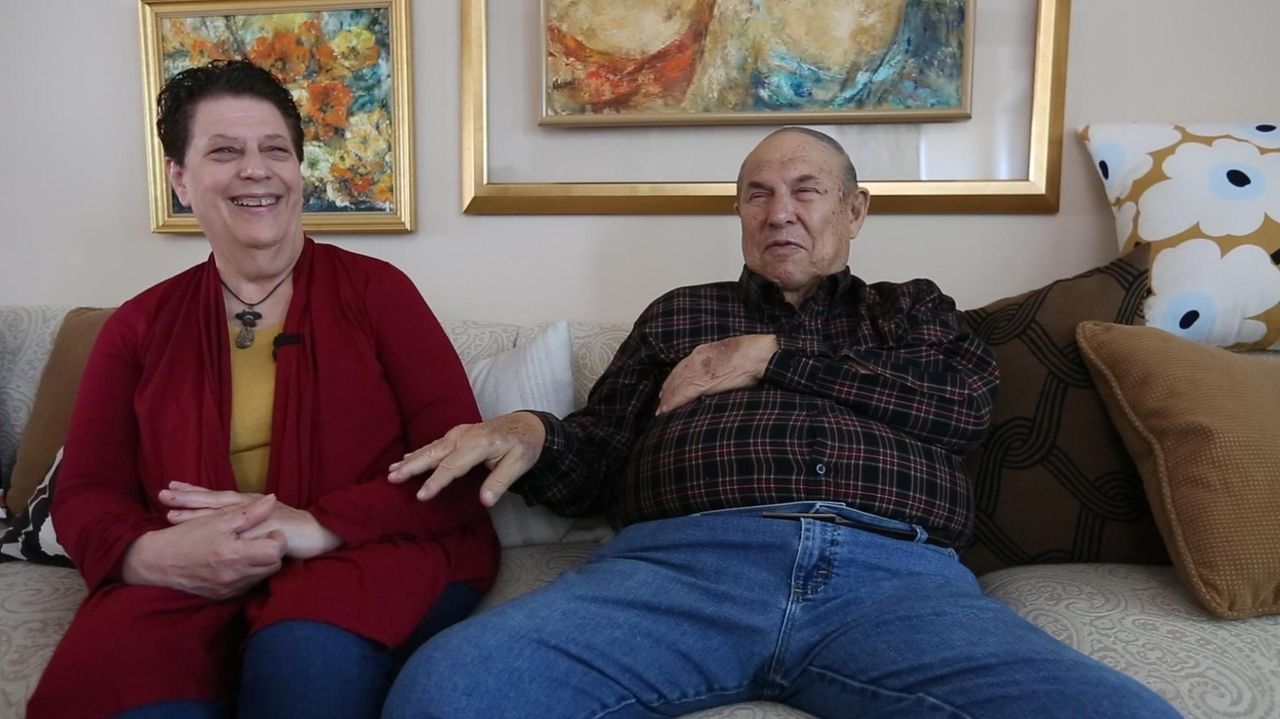 Thanksgiving brought a special blessing for Baldwin resident Michael Goildstein — a visit from a younger half-sister, whom he had never met before. Credit: Linda Rosier

Thanksgiving brought a special blessing for Baldwin resident Michael Goldstein — a visit from a younger half-sister he had never met.

Goldstein, 88, hadn't known of the existence of Davida Kaye, 71, until September. In August, he had submitted saliva for DNA analysis and tapped a link on an ancestry website that began a journey into his unknown past.

That journey came full circle this week as Kaye, who shares the same biological mother with Goldstein, flew in from her home near Chicago for a Thanksgiving celebration with a new extended family.

With that, the two began getting to know one another, filling in blanks in each other's lives, and coming to terms with a chapter in their mother's life that neither had known.

"I've gotten to see her — in the flesh," Goldstein said Friday, giving his new relative a playful pinch on the arm as they sat on his living room couch. "Thank God I've lived long enough to see this."

For Kaye, this development in her life has left her a little overwhelmed. She keeps coming up with questions she'd like to ask her mother, if she were still here. Their mother died of cancer in 1964 at age 57.

"I don't know," Kaye said. "You think you know everything about your family — and you didn't."

Michael Goldstein knew he was adopted as an infant, though he'd known close to nothing about his biological mother. And having a good upbringing with his adoptive parents in Long Beach, he said he didn't bother to ask.

By chance, in 1969 his father, retired from the law firm they shared in Manhattan, had asked his son to empty out his safety deposit box. Inside, Goldstein found an envelope titled "adoption" filled with his adoption papers. It included his biological mother's name, Thelma Udell.

After his adoptive parents died, Goldstein said he reached out to the adoption agency in 1995. From the agency, he learned his biological mother was in her early 20s when she gave birth to him and a high school graduate who worked as a bookkeeper. His father was 27 and a salesman with sandy-colored hair, he said. They had not been married, and his father, he learned, had abandoned his biological mother.

He tried to look her up, but said he couldn't locate her.

Years passed until Goldstein's grandchildren persuaded him to do an ancestry kit this year, which included a DNA test he could send in with a little of his saliva. The results came back in September, telling him he has Jewish ancestry, which was no surprise.

But an online site included a link to email possible relatives. He clicked it, and sent an email to Kaye, saying, "I think we might be related."

Kaye, for her part, was leery about Goldstein's email in a thousand ways.

Was this some scam, she wondered? She thought about it a long time before responding. She also started doing a little sleuthing on Goldstein, finding out as much as she could about the retired lawyer.

Goldstein told her he had his original birth certificate, adoption papers and a letter from the adoption agency. She asked him to send her copies of everything.

Phone calls started between them, some lasting hours. Kaye told him about the life of their biological mother, who married another man, and their family lived in Springfield, Massachusetts.

Goldstein had thought their mother had played piano, but Kaye said she never saw her do that.

He told her about the home for unwed mothers where he was born. Soon they were talking about politics and their shared love of travel. She mailed him pictures of their mother.

Goldstein invited her to his home in Baldwin, which he has shared with his wife, Marian, since 1958, and they set a date.

Kaye flew in on Tuesday, accompanied by her 35-year-old daughter, Melissa.

For Kaye, Thanksgiving has not been a happy holiday since her husband, Michael Kaye, died around the date seven years ago. Besides her daughter, she said she had few close relatives.

Goldstein, for his part, was eager to bring his new sister into a big family that includes four children, all married, along with seven grandchildren and two great-grandchildren. He said the importance of family had been instilled in him since he was a kid.

"She's my half-sister!" Goldstein said. "So what if I have a big family. She's a blood relative."

Thanksgiving dinner flew by in a noisy, chatter-filled blur, with everyone getting to know each other over an abundance of food.

On Friday, Goldstein and Kaye were looking at old photos and census records. They both wished they had discovered one another years ago. His age prevents him from traveling.

They already seemed to act like siblings, with one's sentence quickly followed by the other's thoughts.

"They're gonna come back," Goldstein responded.