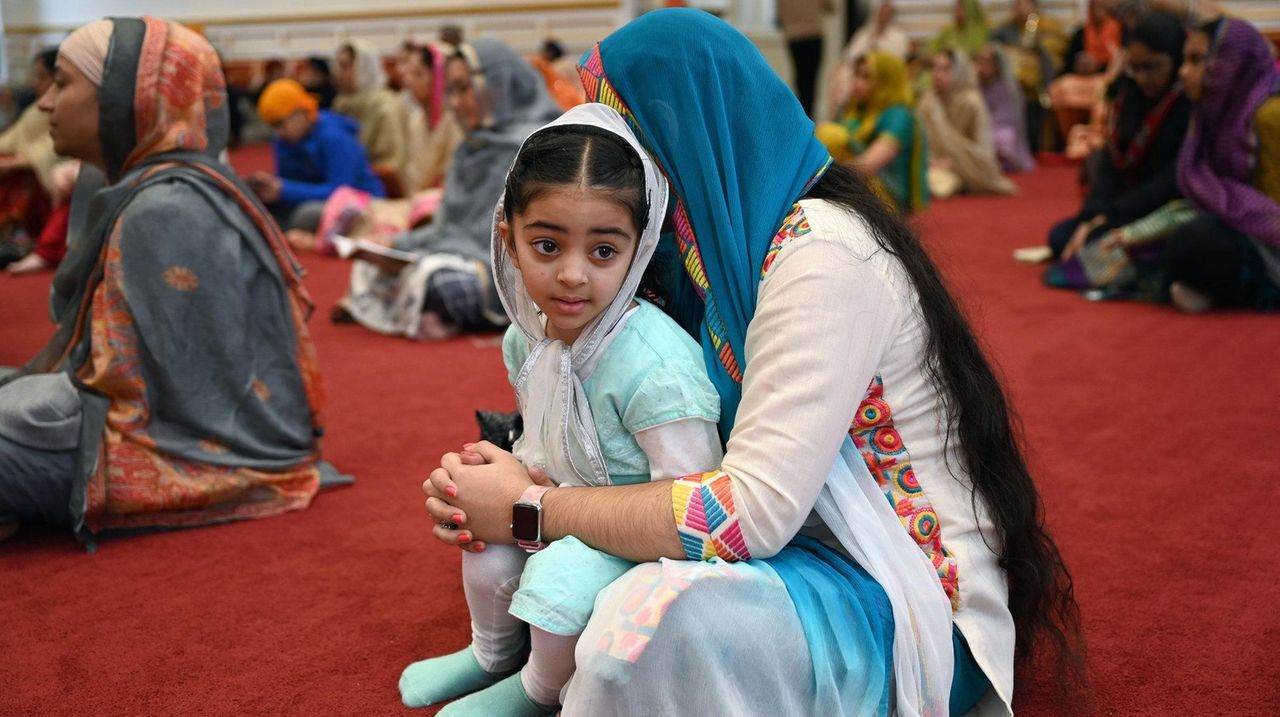 Congregants of the Guru Gobind Sikh Center in Plainview on Tuesday celebrated the 550th birth anniversary of the man who founded the world’s fifth largest religion Credit: Danielle Silverman

Thousands of Sikh families across Long Island filed into local temples on Tuesday to celebrate the 550th birthday of the man who founded the world’s fifth-largest religion.

Guru Nanak Sahib was born in 1469 into a Hindu family in what is now Pakistan. He traveled tens of thousands of miles to spread the word of God and the fundamentals of the monotheistic faith that center on equality and service to others, worshippers said.

While little is known about Nanak’s life, Sikh traditions tell the stories of him rebelling at the age of 11, refusing to wear the sacred thread that distinguished his caste, or social status in Hindu society, according to a BBC overview of the founder. Instead of a thread, he said people should be distinguished by what they did in life.

Beginning in 1496, Nanak, who was married with a family, was said to spend 30 years taking spiritual journeys through India, China and Arabia.

The teachings of Nanak, who died in 1539 at the age of 70, denounced the caste system, saying that all are equal regardless of caste or gender.

“He never [told] anybody to change their religion. But he said you should be good always, either you are Muslim, Hindu, Christian, everybody,” said Narinder Bindra, a trustee on the board of the Guru Gobind Sikh Center in Plainview. “So today, in the whole world, everybody [of Sikh faith] is celebrating.”

Bindra was one of hundreds of Sikhs who visited the gurdwara — or house of worship — in Plainview, which is one of three Sikh temples on Long Island. The others are in Glen Cove and Hicksville. Worshipers prayed, sang religious hymns from the holy book, or Guru Granth Sahib, and ate in a free kitchen that served bread, fruits, sweets, lentils and curry.

There are an estimated 700,000 Sikhs in America, and more than 5,000 observant families on Long Island, according to Sikh officials. Most Sikhs live in India.

“We believe that everybody should be treated [equally],” said Vikas Singh, chairman of the board of trustees at Guru Gobind Sikh Center. “To serve the community, that is what Sikhs believe in.”

In the post-9/11 era, congregants said Tuesday’s celebration was also an occasion for the Sikh community to make its faith known to others.

Sikhs, who wear turbans and don't shave their beards, have been subject to discrimination and hate crimes. Less than two months ago, a Sikh police officer, who drew national attention in 2015 after gaining permission to wear his articles of faith while on duty, was shot and killed in a traffic stop near Houston.

“It is a misfortunate thing that it happened,” Singh said.  But, he added, on Long Island, he had not experienced discrimination. "Rather, we get well-received,” Singh said.

Mohinder Singh Taneja, a Sikh American community leader from Westbury, said any bias that does exist locally may be borne out of ignorance rather than hate.

Chandan Arneja, a member of the group that runs the daily operations of the temple, said Sikhs are active in the community and are interested in raising awareness.

“We participate. I think we get the least amount of bias because we are actually living in the community,” he said. “The key is to make our religion known to other people. Once they know that, I think the bias will automatically reduce.”

Amidst light rain Tuesday morning, Gurpreet Kaur, of Brentwood brought her 27-day-old son, Kabir Singh, to the gurdwara for the first time.

Kaur, who said she intends to keep the religion alive in her family, said she was eager to bring her newborn to the temple to receive the blessings.

“While they are growing up, they can see me come here every Friday and Sunday,” the mother of two boys said. “It’s in our roots. Our parents taught us from the very beginning about the religion. . . . I want them [my sons] to learn the same thing from me so they can follow the same path.”