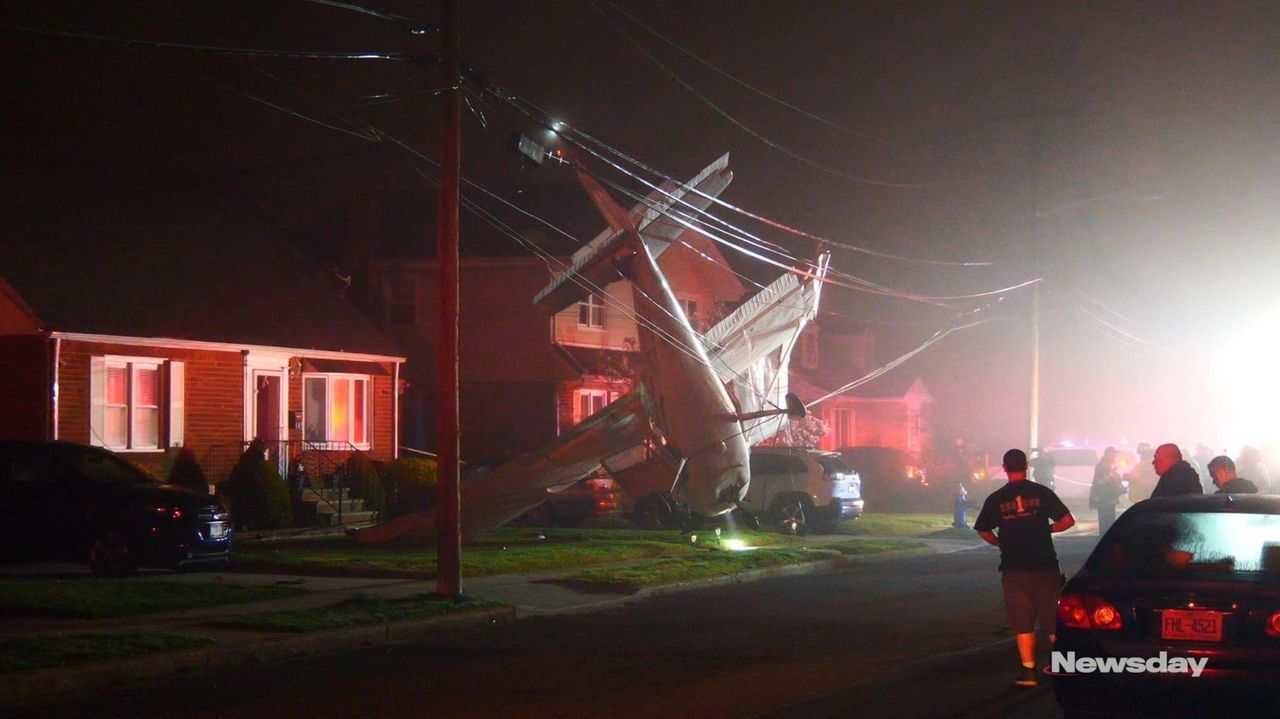 A small aircraft whose pilot became disoriented in the fog made an emergency landing near a Valley Stream home Sunday night, officials said. Valley Stream Fire Chief Jason Croak said the single-engine Cessna plane was attempting to land at Republic Airport in Farmingdale just after 10 p.m. and missed the landing four times due to the heavy fog. Credit: Jim Staubitser

Three people onboard a single-engine plane emerged virtually unscathed after the plane crashed into a Valley Stream neighborhood Sunday night, authorities said. No one on the ground was hurt.

The rented plane ran out of fuel and clipped a church before getting tangled in power lines and coming to a stop just feet from a home's front door, officials said. The disoriented pilot was flying in thick fog at the time.

With a wheel caught on sagging power lines, the plane rested at an extreme angle for hours overnight. By Monday morning, the plane had been removed from the wires and was back on its wheels on the yard of the house. Police cordoned off the block.

The three people onboard, all from Flushing, Queens, climbed out of the intact Cessna, officials said, and there were no injuries on the ground. The three were associated with a flight school at Republic Airport in Farmingdale, said Nassau Police Commissioner Patrick Ryder.

The plane originated from Republic, had flown to upstate Niagara and was returning to Republic, Ryder said. He identified the pilot as Dongil Kim, 27, and the passengers as Hongjoo Na, 29 and Jumwoo Jung, 26. He said the plane had been rented at Republic.

It clipped the roof of Hillside Avenue's Revival Outreach Ministries and glided into power lines above the front yard of a home a block away on Clarendon Drive, officials said. The area is a few miles from Kennedy's runways.

“We heard Armageddon,” neighbor Tim Andrews said. “I came out and I couldn’t believe what I saw. It was unbelievable … it’s so close to the house.”

When first responders arrived, the pilot and passengers had safely made it clear of the plane and appeared uninjured while sitting on the sidewalk, Ryder said. They were taken to a hospital. Hongjoo Na had a sprained finger, Ryder said.

About two dozen houses were without power as a result of the crash and PSEG Long Island had been notified, officials said. On its website, PSEG listed about 50 customers affected Monday morning and said power would be restored by 11 a.m.

There was a dense fog advisory issued by the National Weather Service at the time of the crash. The weather service issues that advisory when visibilities drop to a quarter-mile or less and warns people to avoid driving if possible.

The plane's tail number is registered to an owner in West Babylon. LeBrun said the plane had been rented from the Danny Waizman flight school and aircraft rental service at Republic.

“I’m just so glad nobody’s been hurt," said Cat Andrews, Andrews' wife. "What’s the odds, a plane comes down on a residential street … and nobody’s hurt … so lucky.

“I’m giddy from it,” she said. “Look, it’s a 2.5-feet clearance on the ground, it would’ve been smithereens if it hit the ground.”

“Obviously, a plane crash in Valley Stream is always a possibility,” Valley Stream Mayor Edwin Fare said. “Thankfully, it appears that there are no serious injuries or major property damage. We will await the findings of the FAA [Federal Aviation Administration] before speculating on the incident, but clearly, the fog and weather/visibility could have played a role. This is a first for me in my 57 years in the village.”

Correction: The names of the three onboard — Dongil Kim, Hongjoo Na and Jumwoo Jung — were misspelled in an earlier version of this story. The number of injuries was also incorrect.