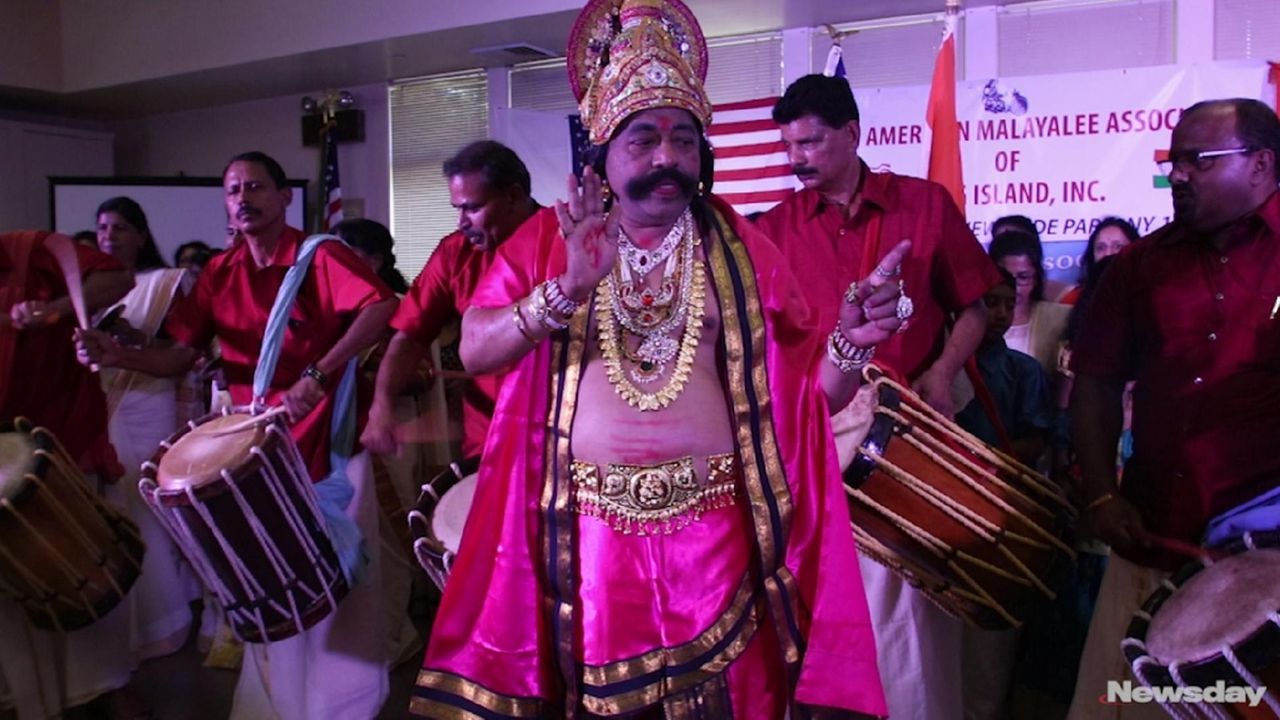 Hundreds of people gathered in New Hyde Park on Sunday, Sept 24, 2017, to celebrate Onam, a South Indian harvest festival, with a feast, music and dance performances. The daylong affair at Clinton G. Martin Park drew Long Islanders of South Indian descent to the celebration, which marks the mythical King Mahabali's return from exile in the underworld. Credit: Jessica Rotkiewicz

Hundreds of people gathered in New Hyde Park on Sunday to celebrate Onam, a South Indian harvest festival, with a feast, music and dance performances.

The daylong affair at Clinton G. Martin Park drew Long Islanders of South Indian descent for the celebration that marks the mythical King Mahabali’s return from exile in the underworld. The festival, which traditionally spans 10 days, is one of the major cultural events for people from Kerala, a state in South India.

A man dressed up as the king, wearing a bejeweled crown, held court over a colorful procession featuring women dressed in delicate white saris bordered with gold and carrying flowers. The group marched to the sounds of traditional drums.

“Onam is a celebration of happiness, love and unity,” said association president Sabu Lukose of Roslyn.

Attendees said the celebration is about remembering their roots and bringing community together.

Joji Kuriakose of Manhasset said he attends the event every year. Kuriakose emigrated from India in 1987.

“We want to keep our community the same so we can pass it on to our kids so they can learn our traditions,” he said.

Dheeraj Kamalan of Great Neck said the festival was akin to Thanksgiving as a harvest celebration, taken to “the nth degree.”

“We recreate Onam here . . . We use it as an opportunity to come together irrespective of differences,” he said.

Kamalan said celebrating Onam made him nostalgic for Kerala, which he left in 1995.

The atmosphere of the event was joyous with children clad in brightly colored traditional garb dancing energetically and others singing upbeat South Indian songs. People enjoyed a vegetarian feast that included dozens of dishes such as aromatic curries and milky desserts.

“We are one big family today as we celebrate Onam,” Bosworth said. “We feel that sense of being brothers and sisters together, not only today but everyday.”

Krishna Kishore, one of several speakers, entreated the crowd to continue celebrating Onam, with even more pageantry and joy, each passing year.

“When the diaspora celebrates Onam, there is soul to it,” said Kishore, of Princeton, New Jersey. “Onam to us is not just a harvest festival important to celebrate with lots of pageantry . . . It helps us pause for a moment to remember where we came from.”