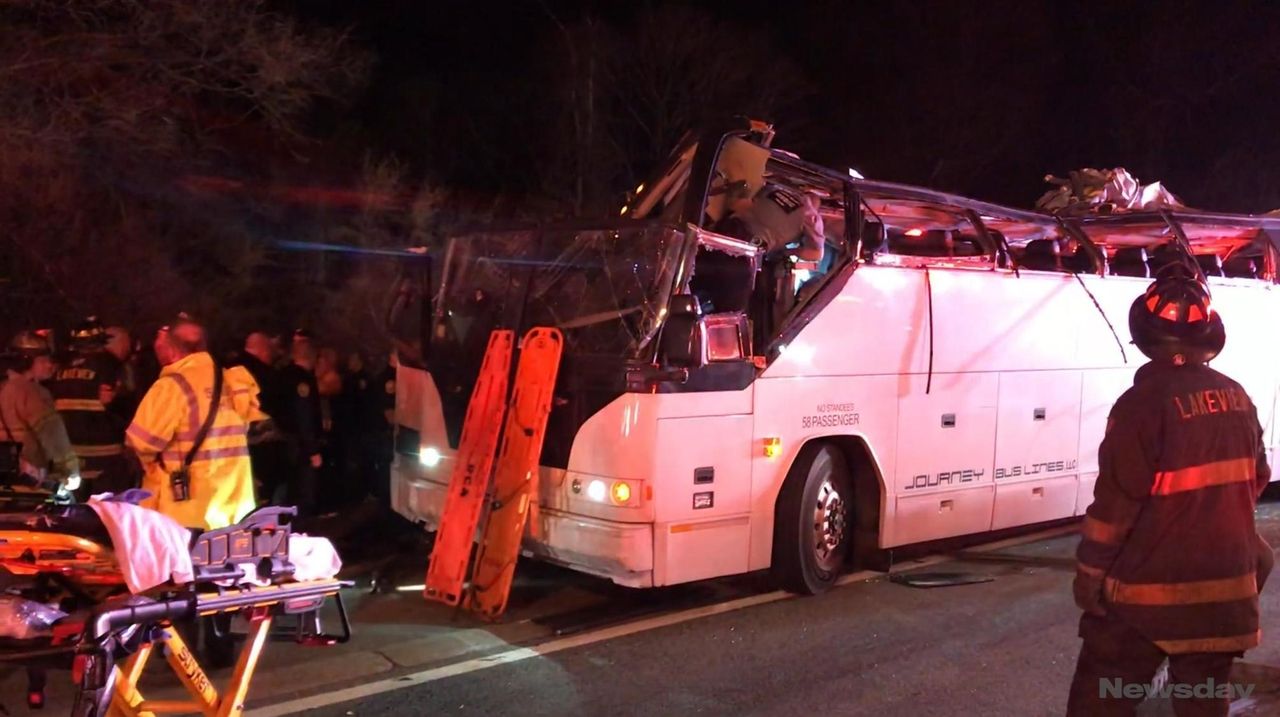 A charter school bus with "dozens" of teenagers and adults onboard struck an overpass on the Southern State Parkway in Lakeview on Sunday night, State Police said. Credit: Lou Minutoli

The crash occurred on the eastbound Southern between exits 18 and 19 in Lakeview. That section of the parkway was closed overnight and reopened shortly before 5:30 a.m.

The students and their chaperones had arrived at Kennedy Airport after the trip with EF Educational Tours and were heading to the Walt Whitman Shops in Huntington Station to meet their parents when the bus struck the Eagle Avenue overpass shortly after 9 p.m., police said.

The top of the white bus was crushed along the vehicle’s entire length, down to the tops of the seats’ headrests.

At a briefing near the crash scene, Maj. David Candelaria said the driver, who was not identified, “obviously wasn’t aware of the parkway system” and its restrictions on commercial vehicles.

“It’s a high-impact strike,” Candelaria said. “He made it all the way through.”

The Southern State, like other New York parkways, has overpasses that are lower than the standard legal bridge clearance — a feature that has led to hundreds of bridge strikes over the years. Charter buses, tractor trailers, school buses and other tall vehicles are prohibited from the parkways.

The Eagle Avenue overpass in Lakeview, with a clearance of less than 10 feet, is among the lowest on the Southern State, police said.

The bus was from Irvington, New Jersey-based Journey Bus Lines. Officials with the company could not be reached Sunday night.

“This could have been tragic. We were very lucky,” he said, adding that the emergency response “probably saved lives.”

Candelaria initially characterized six of the injuries as serious and one of those as “very serious.” He did not specify whether those injuries were to adults or students. The injured were sent to five area hospitals.

Candelaria: driver was not from Long Island area and not familiar with Northern/Southern State Parkways (no commercial vehicles allowed on pkwys).

The students range in age from 16 to 18 and attend various high schools, police said.

Emergency responders used ladders, placed against the side of the bus, to get the passengers off the vehicle.

“Everybody was able to walk out except one, which we extricated,” Lakeview Fire Department Chief Patrick McNeill said. “There was glass everywhere. The roof of the bus is down to the top of the seat covers.”

The passengers were taken to hospitals within 30 minutes of the 9:12 p.m. call, McNeill said.

Parents, family and friends of students involved in the accident anxiously waited at South Nassau for details on the extent of their loved ones’ injuries.

As news reports on the waiting-room television showed the bus their children had been on, a few parents shook their heads as they saw the damage to the vehicle.

Meanwhile at the scene, the parkway’s eastbound lanes remained closed into the early morning hours as the crash investigation continued. The westbound side had reopened after a brief closure.

The crumpled bus, its door hanging open, straddled the right lane and the grassy shoulder off the road. A person wearing a fluorescent vest, holding a flashlight, walked around the wrecked vehicle.

A handful of State Police cruisers, their lights flashing, were parked on the eastbound side, and a few cars drove by on the westbound side.

Tow trucks were parked on Lakeside Drive — the lake barely visible through the brush — awaiting the end of the investigation.

On Twitter, Hempstead Town Supervisor Laura Gillen said that “a lot of questions need to be answered” about the crash.

Newsday reported in December that an electronic system warning truck and bus drivers was to be placed on the Southern State Parkway — in the area where Sunday night’s crash occurred — to indicate when vehicles are too high to fit under a parkway overpass.

It was part of a $4.3 million project to install the detectors at 13 locations in Nassau and Suffolk counties. The system, already in place on the Northern State Parkway, also alerts State Police if a vehicle that is too high trips the system.

The infrared sensors detect vehicles that are too tall nearing or entering a parkway ramp and trigger an alert to the driver on an overhead electronic road sign that warns the driver to pull over.

According to a December news release from Gov. Andrew M. Cuomo’s office, similar systems were installed on five parkways in the Hudson Valley in 2015.

Live traffic updates Cuomo: Warning systems coming to parkwaysAn electronic system that warns truck drivers if their vehicles are too high to fit ...

Woman killed in house fire, police say
NY health officials: Students can be 3 feet apart in classrooms
Brown: One toke over the (town) line
Police: School put on lockdown after threat
5:09
NY seeks to suspend or revoke licenses of 18 LI real estate agents cited in Newsday investigation
Police: Man and his dog fatally struck on Merrick Road
Didn’t find what you were looking for?