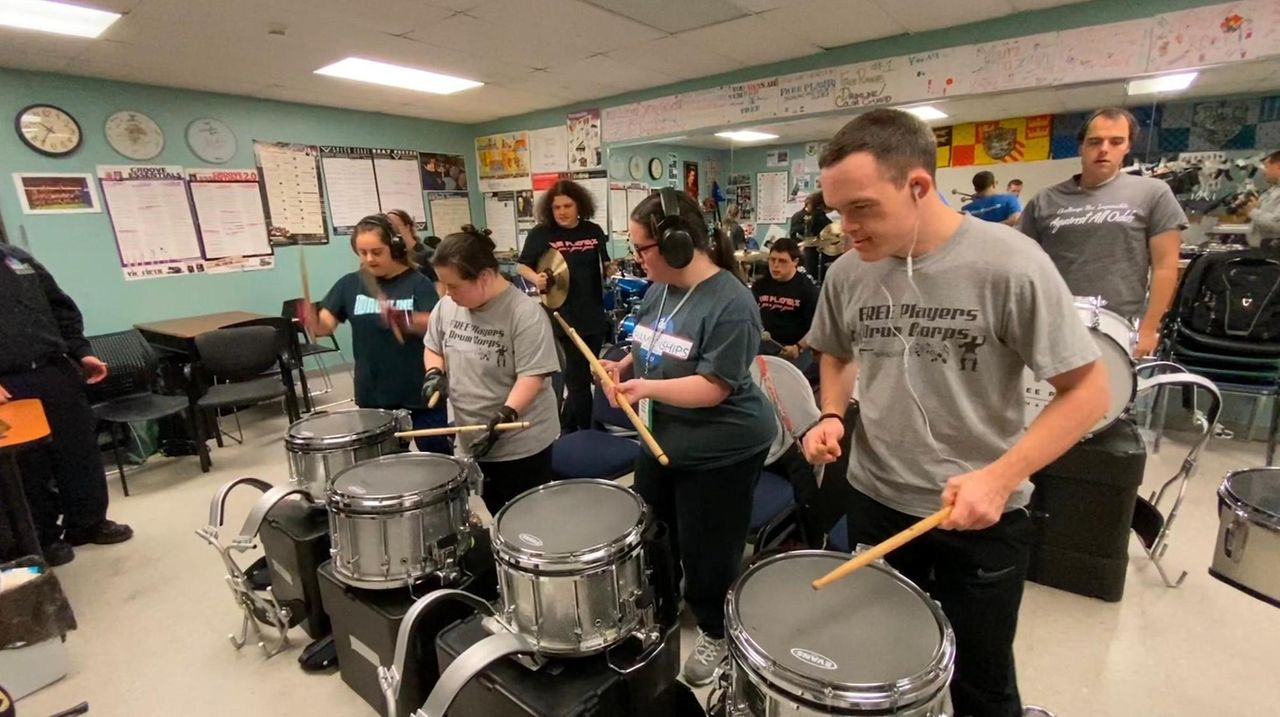 The FREE Players Drum & Bugle Corps, a special-needs drum corps from Old Bethpage, is headed to Indianapolis Wednesday to compete in a prestigious international competition and has a chance to take the top prize against nondisabled teams. Newsday caught up with the group last week during rehearsals.   Credit: Howard Schnapp; Barry Sloan

What sets the 80-strong corps apart as 14 of them head to a prestigious international competition in Indianapolis are the members — adults with cognitive and physical disabilities.

The group has performed at Disney World in Florida, the Columbus Day Parade in Manhattan, and at MetLife Stadium in New Jersey. On Wednesday, they left for the Percussive Arts Society International Convention and PASIC Drumline Battle Championships in Indiana to compete against non-disabled teams.

Their participation marks the first time a special needs group has been invited to compete in the event, which features what are essentially professional marching bands, said its founder and director, Brian Calhoun.

“It is a huge honor to be asked to participate in any capacity,” said Calhoun, himself a former professional drummer in a rock/metal band. “We have never performed at an event that has so many important people from the entire music industry.”

Calhoun said his group has a chance to take top honors, especially after finishing second last year at another competition.

“We are definitely in it to win it,” he said. “There is a real-world championship on the line. This is David vs. Goliath — there is no question about it.”

The group operates out of Family Residences and Essential Enterprises, Inc. (FREE), an organization that provides services to more than 4,000 people with intellectual or other developmental disabilities, mental illness and traumatic brain injury.

The drum and bugle corps was organized 10 years ago by Calhoun. He started with five members who used sticks and pads at first to learn drumming.

Along with drums, the group has a colorguard, guitars, keyboards and a brass section. Almost all the members had never played an instrument until they joined the group.

Fourteen members are making the trip to Indiana, partly to comply with event regulations.

On Wednesday, they had their suitcases packed and ready to go at the Old Bethpage center and were brimming with excitement. Some already had their competitive juices flowing, hoping their drum line team can defeat the defending champions in the event, "Cutting Edge," a Texas team that sports a zombies theme.

"They are two-time undefeated champs. But we are going to break that record and we’re going to steal their glory,” said Brian Pollack, 27, a drummer in the group from North Merrick, referring to the Texas team.

The Old Bethpage group will have, in part, a “Karate Kid” theme based on the 1984 film.

Calhoun thinks they have a chance of winning because of the group's effect on audiences. Besides musical talent, groups are judged on entertainment value and audience reaction.

Last year, Calhoun said, the group performed the theme from "Rocky," the classic film about an underdog boxer overcoming steep odds to take on a formidable opponent.

“No one was expecting us to come out of the gates and legitimately sound like the Rocky theme,” he said. “And to do it in front of 20,000 people.”

“In many ways we are the real-life Rocky story,” he said. “The underdog who is down and out that no one ever expected anything of, and we are able to rise up like a phoenix from the ashes and achieve something great.”

The trip to Indiana will cost about $20,000, with most of the funds raised by donations, he said.

Many members' lives have been turned around by performing with the group, Calhoun said.

“It’s not about disabilities. It’s about abilities,” he said. “Everyone just has this camaraderie that you’re not this person with Down syndrome or with autism. You’re a snare drummer, a drum set player. … It’s a beautiful, wonderful thing.”