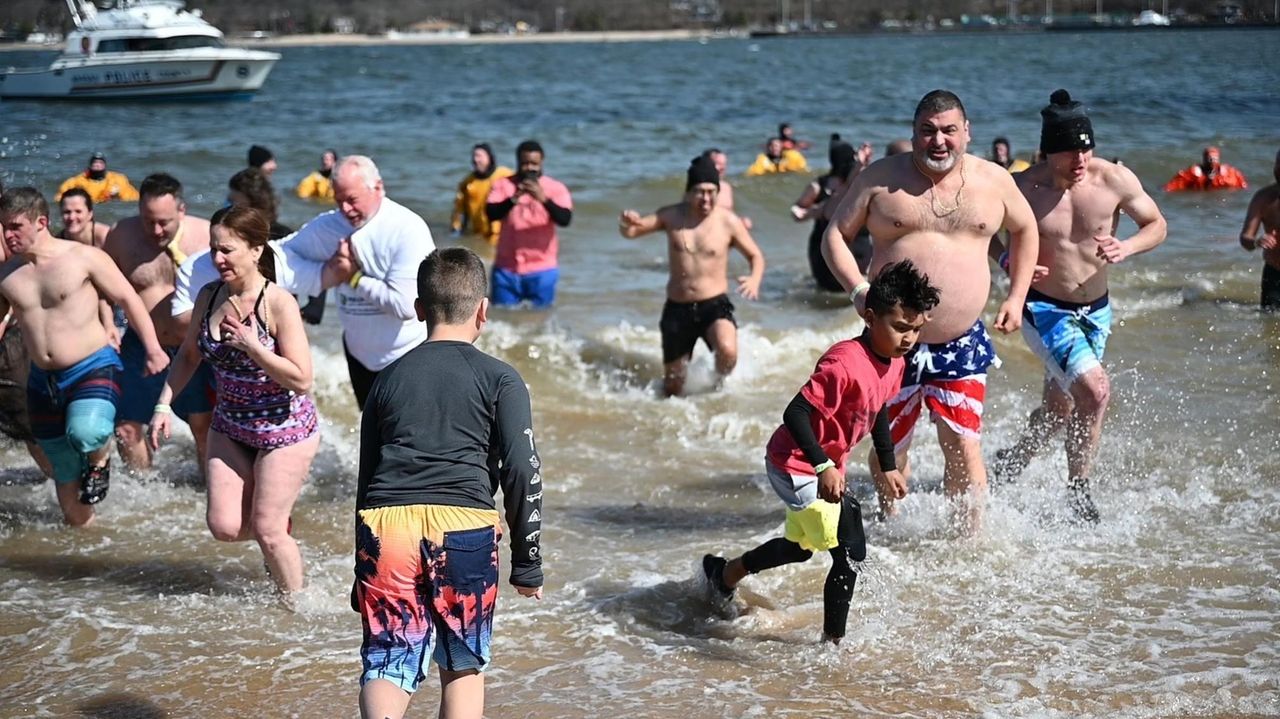 More than 200 people plunged into the 40-degree waters of Hempstead Harbor on a windy Saturday morning for myriad reasons — to mark a new chapter, fulfill a bucket list wish, but more than anything, to celebrate the thousands of athletes in Special Olympics New York.

“I had a child who was born with disabilities and died before he was two years old because of those disabilities. He’s always in my heart,” said Mike Delafraz, 65, of Great Neck, wearing swimming trunks as he ran back onto shore and the cold water dripped from his hair.

Some participants dove underwater, like Delafraz, while others went only knee-deep at North Hempstead Beach Park in Port Washington for the 16th annual Town of North Hempstead Polar Plunge to raise funds and awareness for Special Olympics New York athletes in the Long Island region.

Participants raised $50,000, which will help the organization provide year-round sports training and competition, and health and inclusion programs for athletes in the Long Island region, said Rebecca Hoffmann, director of development at Special Olympics New York.

The Polar Plunge was something Delafraz said he always wanted to do, as a personal experience and to honor his son’s short life.

“It feels unbelievable, like this natural, wonderful high,” Delafraz said of his first time. “I consider it like my welcome party to myself for my senior citizenship, so to speak.”

Other participants, however, couldn’t get their mind off being drenched in cold water as the winds reached 17 miles per hour and the temperature  was at 40 degrees.

“I can’t really feel my toes,” said Colleen Flynn, 22, of Commack. Flynn said she grew up supporting Special Olympics events, which her now 18-year-old brother who is on the autism spectrum used to participate in. “I think it’s a really great cause and it’s awesome to see the camaraderie and feel that community spirit.”

Odette Walsh, 57, and David Lyons, 59, both of Westbury, said they were proud to complete a bucket list adventure together for the first time.

"I'm freezing but I feel really good about myself," Walsh said. "We have a list of things we want to accomplish that are also helpful to other people because we're grateful for what we have."

The two raised $225 combined and hope to continue participating in other polar plunges for good causes, Walsh said.

“It’s all about ‘freezin’ for a reason.’ We just ask the community to come out for our athletes,” Hoffmann said.

Special Olympics New York, which is celebrating its 50th year, has several plunges scheduled for March, including one on March 14 in the Town of Oyster Bay at Tobay Beach, and two on March 21 in Ithaca and Rockaway, Queens. Other plunges can be found on the organization's website, polarplungeny.org.

The cold didn’t stop Daniel Fletcher, 32, of East Moriches, from participating in the plunge as a Special Olympics athlete for the second year.

“I love Special Olympics,” Fletcher said. “It was very cold, very windy, but I was having fun with my friends and coaches.”

Erin Lipinsky, a longtime Special Olympics athlete, not only plunged for the fifth year in a row, he also raised $16,000 and became the top fundraiser in the region.

“It means a lot,” said Lipinsky, 43, of Great Neck, about the funds he raised. “It took an effort to make this work and next year, we’re going to raise a lot more.”

How the COVID pandemic changed Long Island's towns
1:25
Doctors disagree on whether Cuomo's decision to lift restrictions is wise
1:19
Students organize rally against anti-Asian crimes
3:19
No criminal charges for many drivers in crashes that kill pedestrians, bicyclists
2:22
Long Island towns and cities getting into the weeds on NY marijuana law
Comptroller: Long Beach relying on 'one shot revenues' to balance budget
Didn’t find what you were looking for?