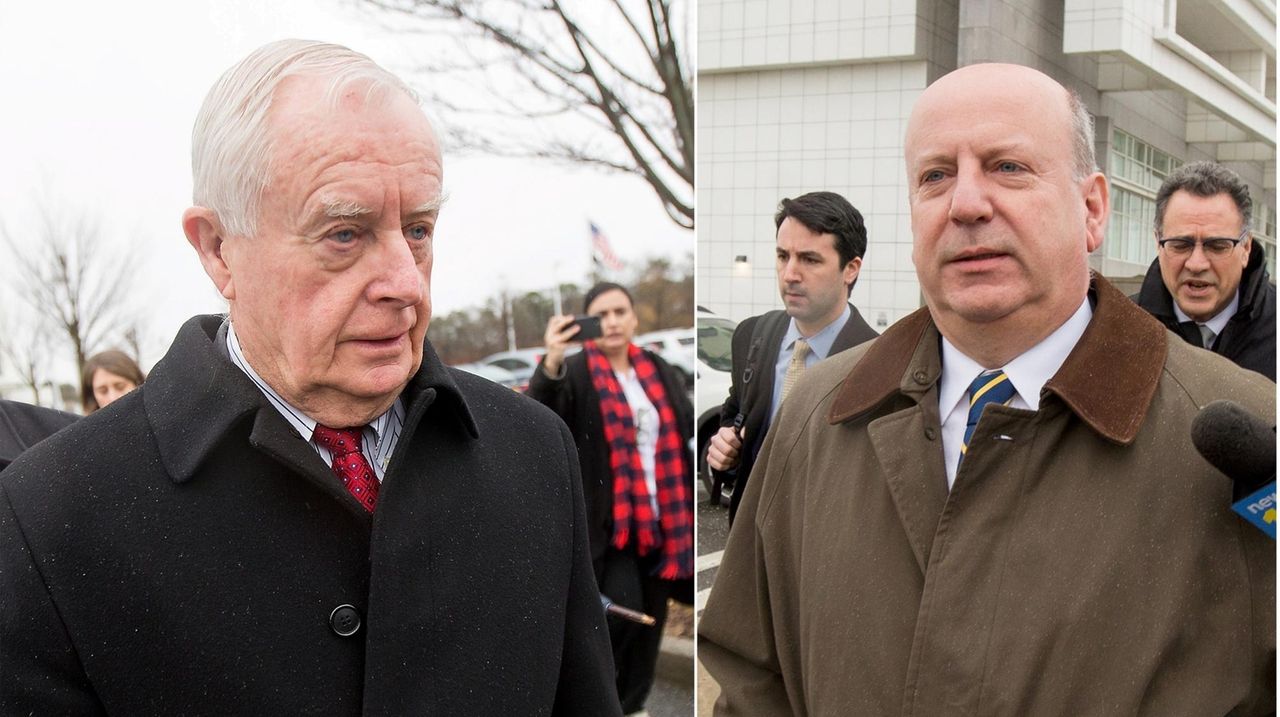 Christopher Loeb spent the last few weeks inside a courtroom in federal court in Central Islip at the trial of former Suffolk County District Attorney Thomas Spota, reliving the most difficult moments of his life: His assault seven years ago at the hands of former Suffolk Police Chief James Burke, a Spota protégé.

Loeb listened to testimony from several witnesses in the six-week trial of Spota and his anti-corruption chief, Christopher McPartland, who were convicted Tuesday morning of helping Burke and others cover up Loeb’s assault in a Hauppauge precinct on Dec. 14, 2012.

“Seven years later, the hell that I’ve been through, the trauma,” said Loeb, 33 and living in Suffolk, reflecting on the verdict afterward as he stood outside the federal courtroom. “I’m ecstatic. … This is the greatest Christmas present.”

Loeb said he experienced days of frustration while hearing witnesses give detailed accounts of the beating and the extraordinary lengths he said the defendants had taken to ensure the truth never came out.

But when a jury of his peers announced the guilty verdicts Tuesday morning, the man who was at the center of one of the biggest law-enforcement scandals in Suffolk County said he felt satisfaction and a sense of peace.

“It’s ironic that a drug user, who happened to break into a police car, was the linchpin that brought them down,” said Suffolk Legis. Robert Trotta, a former police detective who sat through the trial and who one witness testified Spota feared greatly because of his association with federal prosecutors.

“The old guard in Suffolk County died today,” said Loeb’s attorney, Bruce Barket of Garden City, who won Loeb a $1.5 million settlement from the county over the beating. “Hopefully, the old ways of doing things died too. Personally, I feel awful for two men whose careers ended in shame and prison. But this was a just result of a necessary and long overdue prosecution.”

Loeb, who said he has been off drugs since February, has his own legal issues. He was arrested by Suffolk County Police in Ridge last March 22 and is facing second-degree assault and reckless endangerment charges in an encounter with police officers that ended with Loeb fleeing and being bitten on the leg by a police dog. Loeb said he’s pleaded not guilty and plans to go to trial.

What do you think of the guilty verdict?

On Tuesday morning, Loeb wasn’t in the courtroom when the verdicts were read. He said he had gone over to the nearby county court building to meet someone.

But when he got word that a verdict was in, he ran back to the federal courthouse, he said, with a smile on his face. Loeb said he got a hug from Assistant U.S. Attorney Lara Treinis Gatz, one of the four who prosecuted Spota and McPartland, in the hallway.

“It was validating the truth — what I’ve been talking about for years,” said Loeb, who said he’s fielded calls from well-wishers and others seeking his reaction. “My phone’s blowing up — everyone, lawyers, news people. Just random people that have been wronged by them.”

A painter by trade, Loeb said now that the Spota-McPartland trial is over, he’s looking forward to getting back into the workforce.

But he said something deeper is pulling at him. He’s had dozens of people in recent years reach out to him with their own stories of police and prosecutorial misconduct, looking for his guidance.

“I wanna get out there, I wanna start publicly speaking, advocating for people,” Loeb said. “I love the law and I love exposing corrupt officials and I love helping people.”

What do you think of the guilty verdict?Tell us your thoughts on the Spota-McPartland guilty verdict. Power on Trial: Jury's quick decision on Spota, McPartlandThroughout the trial, the jury had earned a reputation for promptness, even in tricky weather. Spota, McPartland convicted on all chargesThe verdict came on the second day of deliberations in the six-week trial, with both defendants remaining stone-faced as the jury forewoman announced the verdict. Spota's obstruction trial: How we got hereFollow Newsday's coverage from the beginning of the case against Thomas Spota.

2:26 Forecast: High winds, sunny and very cold
Suffolk sets vote on new aquaculture lease rules
Top photos from around LI, NYC from February 2021
Photos of the dayTop photos from around LI, NYC from March 2021
Virus positives below 4% as NY reaches COVID-19 one-year mark
2:07 Forecast: Overnight winds of up to 55 mph
Didn’t find what you were looking for?