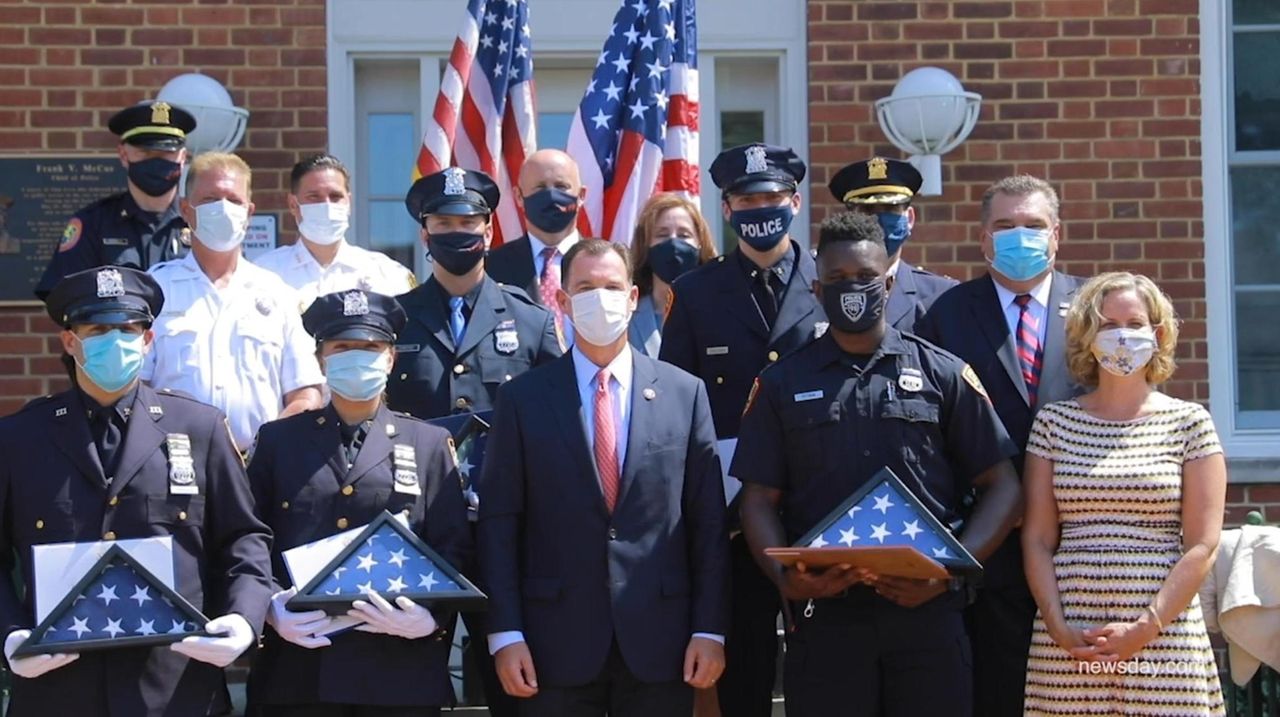 Jablonski quickly found a small boat and rowed to the victim, using his hands as paddles in the 43-degree waters. Jablonski, who was unable to pull the victim onto the boat or row back to shore with him clinging to the vessel, jumped into the water to save the man. Rescue personnel on shore were able to throw a line to the officer and victim, who was taken to a hospital with his core temperature below the threshold for hypothermia. The man survived.

"Officer Jablonski willingly and selflessly put his own safety at risk in order to save the victim," said Suffolk Police Commissioner Geraldine Hart at a news conference Monday in Glen Cove to honor five officers from four departments across Rep. Tom Suozzi's (D-Glen Cove) Third District.

Even as law enforcement nationwide has come under intense criticism since the death of George Floyd while in police custody in Minneapolis — sparking months of protests against police brutality — officers still deserve recognition, Suozzi said, as "people who put their lives on the line every single day."

"Cops have been getting beat up lately," Suozzi said outside of the Glen Cove Police Department. "We need to show our support for the great things they do. That does not mean we are against reforming things to make them better … But we need to hold up police officers who are examples of the best in us."

Suozzi, who represents parts of Nassau, Suffolk and Queens, highlighted four examples in the past year of officers demonstrating bravery, heroism and selflessness. Each officer was presented with a flag flown over the U.S. Capitol in their honor, along with a Congressional citation.

NYPD officers Michael Ippolito and Lauren Creighton, of the 111th Precinct in Queens, were on patrol in December when the mother of a 13-month old infant called to say he had stopped breathing while she drove on the Cross Island Parkway, said Glen Cove Police Chief William Whitton.

When the officers found the infant, he was unconscious, unresponsive, and indeed, not breathing. Ippololito pumped air into the baby's lungs through a bag attached to the infant’s trach-tube while Creighton coordinated emergency personnel, Whitton said. The child regained consciousness and recovered.

Officer Keith Owens, a five-year veteran of the Nassau police department, responded to the Americana Manhasset on July 25 after reports of an active shooter, said Nassau Police Commissioner Patrick Ryder. Owens chased down the suspect, Yuri Oluh, 21, of Jamaica, an alleged member of the Snow street gang, and took him into custody. No one was injured in the incident.

And Glen Cove Officer Darren Pittman was honored for saving the life of a Nassau officer who texted him at 4:20 a.m. in November to say he was depressed and thinking of suicide, Whitton said. Pittman, dressed in his pajamas, rushed to the officer's home and found him in his vehicle holding an off-duty handgun with his service weapon on the front seat.

Pittman lunged for the gun and wrestled it from the officer, who was subdued, Whitton said. The officer recovered and is back on the job.

"That's the brotherhood; the family in law enforcement," said Ryder, who awarded Pittman the Medal of Valor, the first time the honor went to an officer outside the Nassau police department. "It's how we always look out for one another."