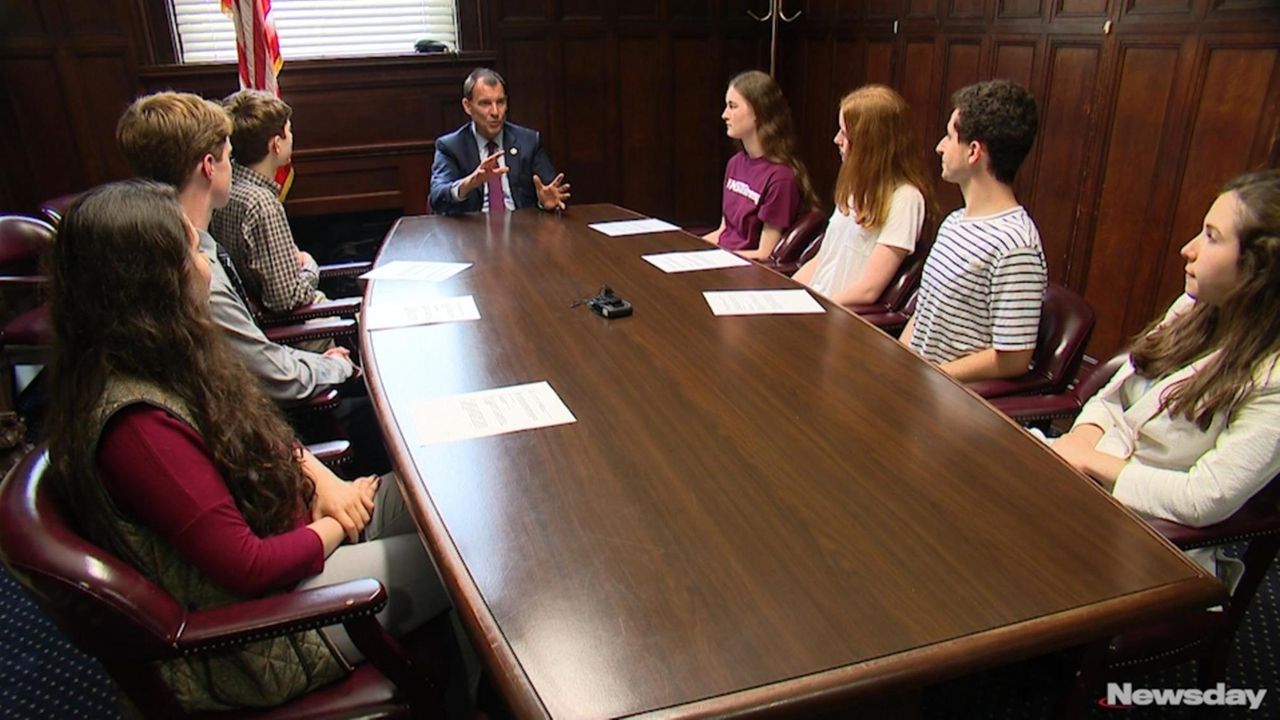 “The grown-ups have failed,” he told a group of students who helped organize the March for Our Lives on Long Island on March 24, a day of demonstrations nationwide in response to the Feb. 14 massacre at Marjory Stoneman Douglas High School in Parkland, Florida.

“We need young people to embrace this issue and keep it on the front burner,” said Suozzi (D-Glen Cove).

He encouraged the students to vote, if they are of legal age, to help register others to vote and to continue to make noise about the issue through demonstrations and through social media.

They met with Suozzi at Glen Cove City Hall at a previously scheduled “fireside chat” that took on greater urgency with reports early Friday that a student at Santa Fe High School in Santa Fe, Texas, had opened fire on classmates, killing at least 10 people and renewing the debate over guns and who should be able to obtain them.

“Obviously today in the wake of this morning’s events we were just shocked,” said Avalon Fenster, 16, a sophomore at the Stony Brook School, referring to another shooting at a U.S. school. “Not necessarily that it had happened again but just shocked that it took this for everyone to . . . keep paying attention.”

The meeting took place two days ahead of an event the students are hosting in Huntington Village as a follow-up to the March for Our Lives event in March and in preparation for the November elections that, they said, they hope will bring into office lawmakers in favor of what they termed “common sense” gun legislation.

The meeting was part interview, part pep rally, with students asking Suozzi’s position on whether teachers should be armed, whether armed guards should patrol school corridors and the status of pending pieces of legislation.

“I don’t think the answer to guns is more guns,” said the congressman.

The students spoke of their feelings of fear within the walls of their schools, where they said they dreaded hearing fire drill alarms because, at the shooting in Parkland, such a clarion preceded the gunshots that lasted six minutes and ended with the deaths of 17 people.

Peters, who is a cousin of Scott Beigel, a teacher killed in the Florida school shooting, said she finds herself “mapping out my escape plan” during drills, while McKenna said he looks “for the best places to hide if there’s a lockdown.”

They traded reports about what school districts have done to protect their students since the February shooting, from hiring armed guards to requiring students to wear identification cards on their necks, measures that Morris called “the last line of defense.”

Suozzi listened and often shook his head, saying it was “awful” and “not normal” for students to have such concerns that were nonexistent when he grew up.

“When you have that kind of mentality that you’re always in danger,” said Fenster, “it completely distorts your learning environment.”

LIers express grief after latest shootingLinda Beigel Schulman, the Dix Hills mother of teacher Scott Beigel, who died in the Parkland shooting, says, "It's like reliving the whole thing all over again." Top cops: Aim to ID potential shooters Hours after the fatal mass shooting at a high school in Texas, the police commissioners ...