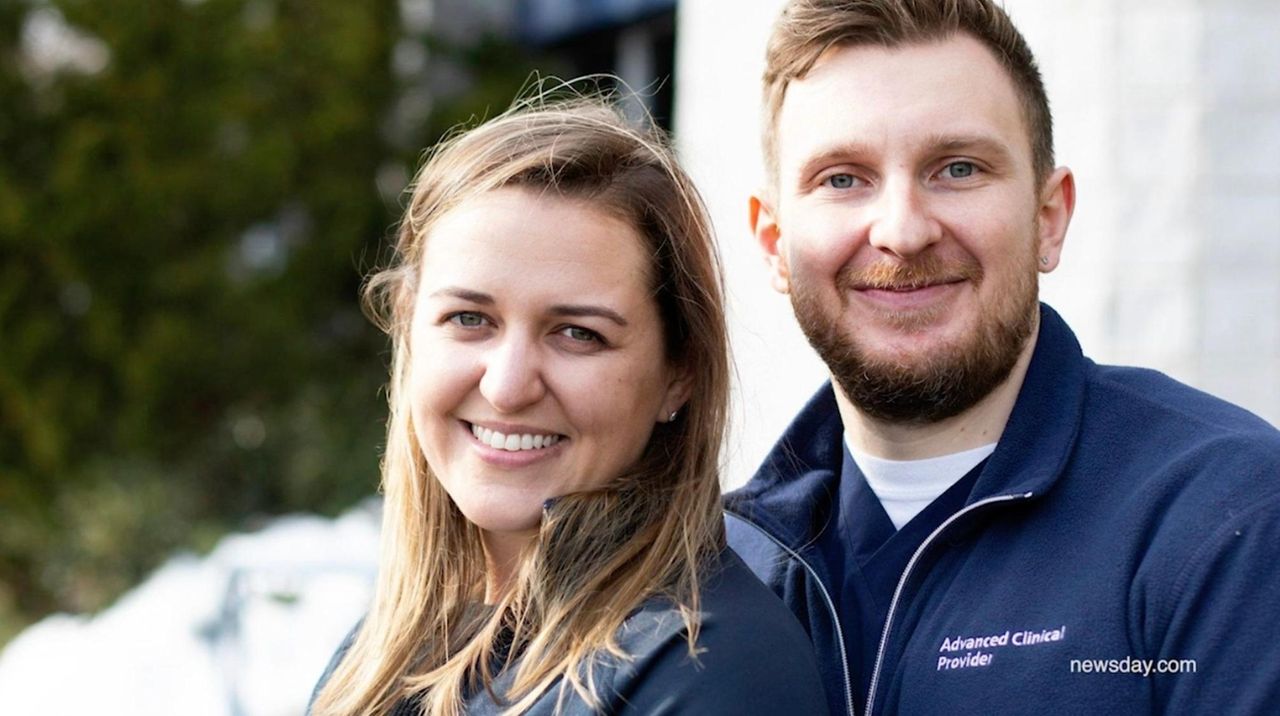 Newlywed health care workers Maciej Mazurkiewicz and Kimberly Smith have been through it all in the past year, serving on the front lines of the COVID-19 pandemic while trying to arrange their long-awaited dream wedding.

Then the virus sacked the couple's wedding reception and threw a flag on their Hawaiian honeymoon.

But when Mazurkiewicz's beloved Tampa Bay Buccaneers made it to Super Bowl LV against the Kansas City team, the Farmingdale couple knew they had to be there, too.

Mazurkiewicz, a physician assistant at Lenox Hill Hospital in New York City, tried everything to get tickets. Emails to the NFL. Calls to the Jets and Giants. He even reached out to Buccaneers quarterback Tom Brady and tight end Rob Gronkowski on Instagram. Nothing.

But on Wednesday, Mazurkiewicz opened an email to find the surprise of a lifetime.

Northwell Health, which operates Lenox Hill, helped secure two tickets for the big game in Tampa — the first time a team will play the Super Bowl in their home stadium.

"It still feels pretty surreal," Mazurkiewicz said Friday. "I don't think it will kick in until we are landing there and walking into the stadium."

A $500 voucher from JetBlue, awarded to health care heroes, will cover Saturday's flight to Orlando and their return to New York Monday.

"It's a once in a lifetime" opportunity, said Smith, a pediatric oncology nurse at Northwell's Cohen Children’s Medical Center.

The trip will take the couple full circle after Mazurkiewicz proposed to his longtime girlfriend in Clearwater Beach, Florida, on Super Bowl weekend last year.

It's been nonstop challenges ever since, from fighting the pandemic to being forced to scrap their 150-person wedding reception in favor of a modest Aug. 21 party in the backyard of Smith's family home in Bellmore. And the honeymoon in Hawaii would have to wait.

"In the grand scheme of things, we remain healthy and safe," Mazurkiewicz said. "So having these small personal obstacles is not the end of the world when you see people struggling and suffering."

As a child, Mazurkiewicz and his family vacationed in St. Petersburg, Florida, and grew to love the Bucs, despite their worst all-time winning percentage among NFL teams.

He eventually lured Smith into his fanaticism. Through poor quarterback play and ungodly final scores, they rooted together in red and white, making annual pilgrimages to the Bucs' Raymond James Stadium.

On Sunday, the couple, who are both fully vaccinated, will sit among 22,000 fans, including 7,500 health care workers.

"Having your team, after years of misery, in their home stadium, with a decent chance of winning the game … after the crazy year we've had, it's definitely amazing," Mazurkiewicz said.

Despite the trip, Smith cautioned that she's still expecting a proper honeymoon.

"I still want to go to Hawaii," she joked. "Let's be real. Florida is nice and all, but Hawaii is better."

As for the final score, Mazurkiewicz, unsurprisingly, is going with the home team.