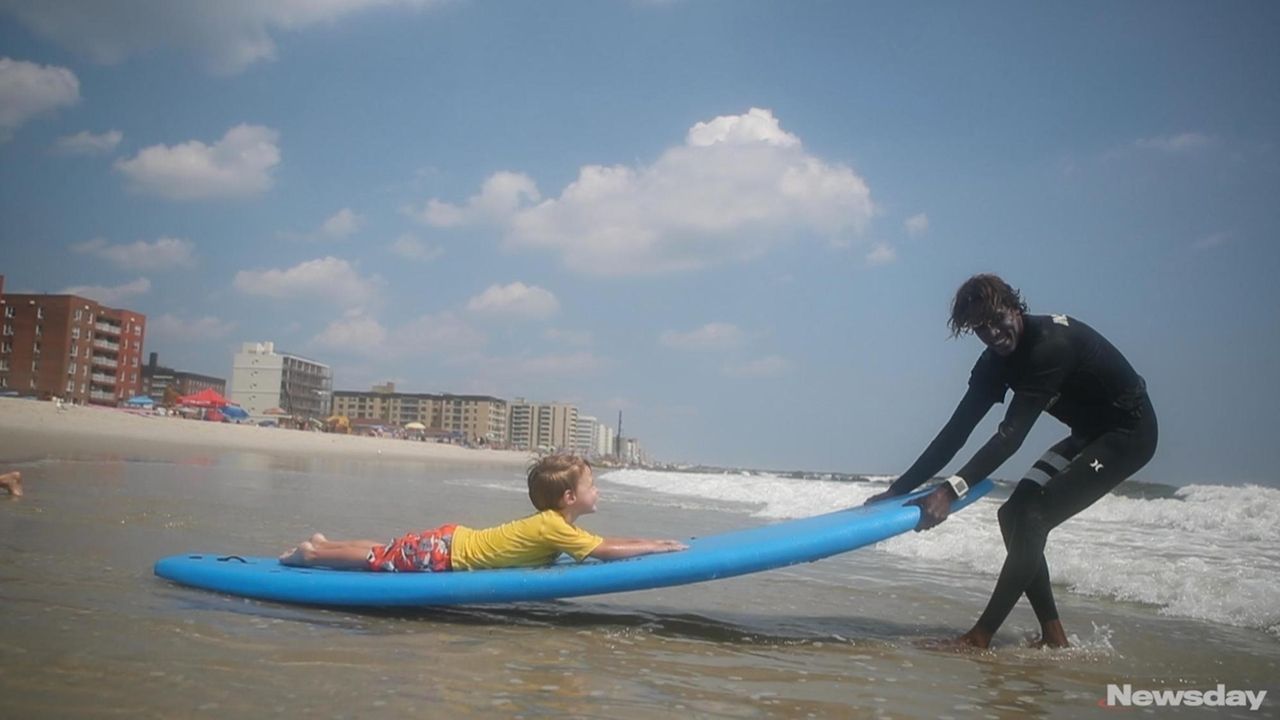 For Aidan Conroy, his second try on a surfboard was a lot different from his first.

The 13-year-old from Oakdale surfed for the first time last year with a life vest, which helped him spring back up after falling off his board.

But this year, Aidan had no vest and he was able to feel the action in the water — an exciting experience for someone with cerebral palsy, which affects muscle coordination in his legs.

“It felt like I was just the same as everybody else,” he said.

Aidan was one of a dozen patients from the Hospital for Special Surgery who came out to Long Beach Wednesday to brave the waves and build sand castles. This was the medical center’s second annual group surf, where patients with disabilities get to participate in activities they might not normally experience.

“I went a lot further this year than I did last year,” said Conroy, who managed to catch a 4-second wave at one point.

Andrea Conroy cheered her son as she stood beachside with her other children, Kieron, 10 and Ethan, 6.

“He’s really good at archery,” she said of her son, who is also a competitive archer. "Where he can do something that requires stamina or hand-eye coordination, he's amazing."

“It allows the kids to use their bodies in new and different ways,” said Peyton Katz, pediatric patient and family coordinator at HSS.

Alexandria Vega, 9, of Far Rockaway, who has cerebral palsy, was so eager to attend the event that she cried when it was initially canceled Monday because of rain.

“I stood up on the board three times, but last year I only stood up once,” said Alexandria , whose mother said she was a lot more confident this year.

Some patients sat while they maneuvered the gushing water with the help of skilled surfers from Skudin Surf, a surfing school .

Brooklyn McDonald of Brooklyn returned to Long Beach for the second time. The 6-year-old used a beach wheelchair to get around Wednesday. After being wheeled from the car to the beach to the plastic mats that create a pathway along the beach, Brooklyn had her chance in the water and on the land, where she likes to scoop sand.

Andrea McDonald, 35, said her daughter looks forward to the annual event and appreciates how it includes everyone.

"It doesn't matter if she can stand or not stand, none of those things matter," she said.

Patients can look forward to the next outing in October — a dance clinic with the Radio City Music Hall Rockettes.