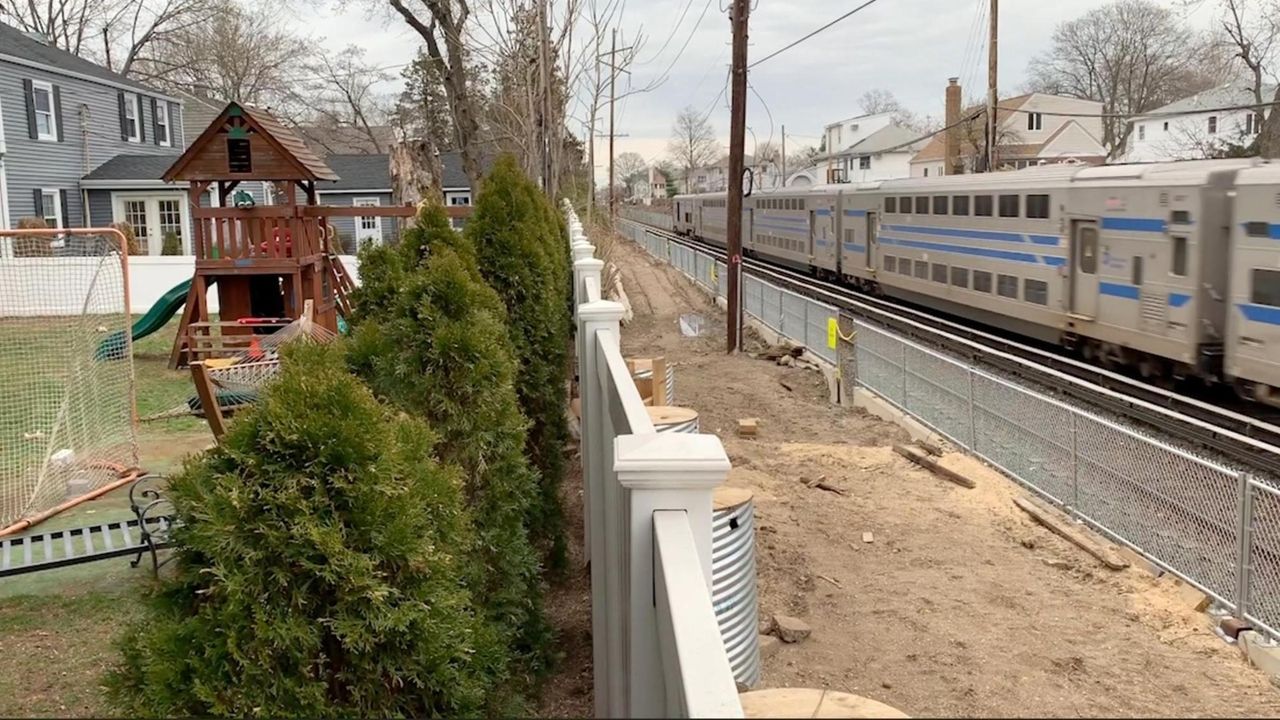 Amol Christian and Jose Aguilar, both of Carle Place, disagree with the MTA's incentive program that awards contractor 3TC up to $250,000 every three months if residents feel the company has addressed quality-of-life issues during construction.  Credit: Howard Schnapp

1. a thing that motivates or encourages one to do something.

The construction company handling the Long Island Rail Road’s third track project could earn millions in extra money beyond its $1.8 billion contract if it receives favorable reviews from residents in the towns of North Hempstead, Oyster Bay and Hempstead who are affected by the construction along the 9.8-mile Main Line.

Under the Metropolitan Transportation Authority’s Design-Builder Incentive Program, Third Track Constructors (3TC) will be awarded up to $250,000 every three months depending on how well residents feel the company has addressed traffic changes, safety, noise and other concerns. The payment is made after MTA officials review results from the agency’s Community Scorecard, a survey sent to residents seeking feedback about 3TC.

Mark Roche, the MTA’s project executive assigned to the third track, said the incentive program is really about residents between Hicksville and Floral Park feeling comfortable during construction, which is expected to last up to four years. He said MTA officials knew the project would mean “we’re going to be right in their backyard and we couldn’t predict what issues they [3TC] would run into.”

The MTA decided that offering more money to influence the “behavior of the contractor was appropriate.”

“The big push was to make sure it affected quality of life as little as possible,” Roche said.

Along the miles-long route, workers for 3TC are frequently emptying garbage trucks with construction debris, using road sweepers to clean the streets and planting shrubbery and flowers to brighten certain areas, Roche said.

Dangling more money in front of contractors will become the new normal for major MTA projects, Roche said. It’s a strategy some residents disapprove of.

Amol Christian, of Carle Place, said it’s unconscionable that 3TC is getting extra payments, especially since construction crews are disturbing residents by working on weekends and the early evening on weekdays. Carle Place residents “are really taking the brunt of all the effects” of third track construction, so any available funds should benefit residents, not the contractor, Christian said.

“That $250,000 can go a long way for our community,” he added. “For us, over a three-year period, we’re talking millions of dollars. That’s money that should be redirected and can be used to beautify [the hamlet] or make [road] improvements along Westbury Avenue.”

Jose Aguilar, who also lives in the hamlet, said the MTA should instead use extra dollars to build 10-foot sound barriers along the new track as well as shrubbery to discourage individuals from putting graffiti on barrier walls.

“Instead of providing money to 3TC, the MTA should pour more into the look and feel of the project,” Aguilar said.

3TC will be the first company to benefit from the incentive program, but not the last.

“It’s part of our overall new strategy for the MTA to make sure we’re dictating behavior,” Roche said of the program. “We are deliberately inducing good behavior. If they behave very well, they get paid well.”

$3.75M How much 3TC could earn if it scores perfectly on the remaining community scorecard rounds.

$225G How much 3TC will get in May based on the firm’s fourth-quarter 2018 community scorecard. The company won’t receive the full $250,000 because residents and the mayor of New Hyde Park weren’t pleased with 3TC's street-cleaning efforts, Roche said.

1,854 The number of surveys sent to residents via postal mail and email.

278 The number of surveys returned.

108 The number of responses from New Hyde Park residents, the highest response turnout of all communities. Westbury came in second with 37 responses.

74% Respondents who agreed that 3TC has kept streets clear of noticeable dust and debris from construction.

72% Respondents who agreed that noise originating from 3TC construction sites has not been intrusive to their household.

47% Respondents who agreed that 3TC’s aggressive rodent and pest control program has been effective.

22 Number of scorecards discarded because they were either duplicates or had incomplete responses.

10 Number of questions asked on the survey

Photos of the dayTop photos from around LI, NYC from March 2021
2:17 Forecast: Cold, sunny today; temps to reach near 60s this week
Family-friendly Glen Head called a 'hidden jewel'
Senior facility proposed on Oceanside Jewish Center property
2:51 Forecast: Another chilly day Monday but hints of spring by Tuesday
Catholic bishops discourage faithful from J&J COVID-19 vaccine
Didn’t find what you were looking for?