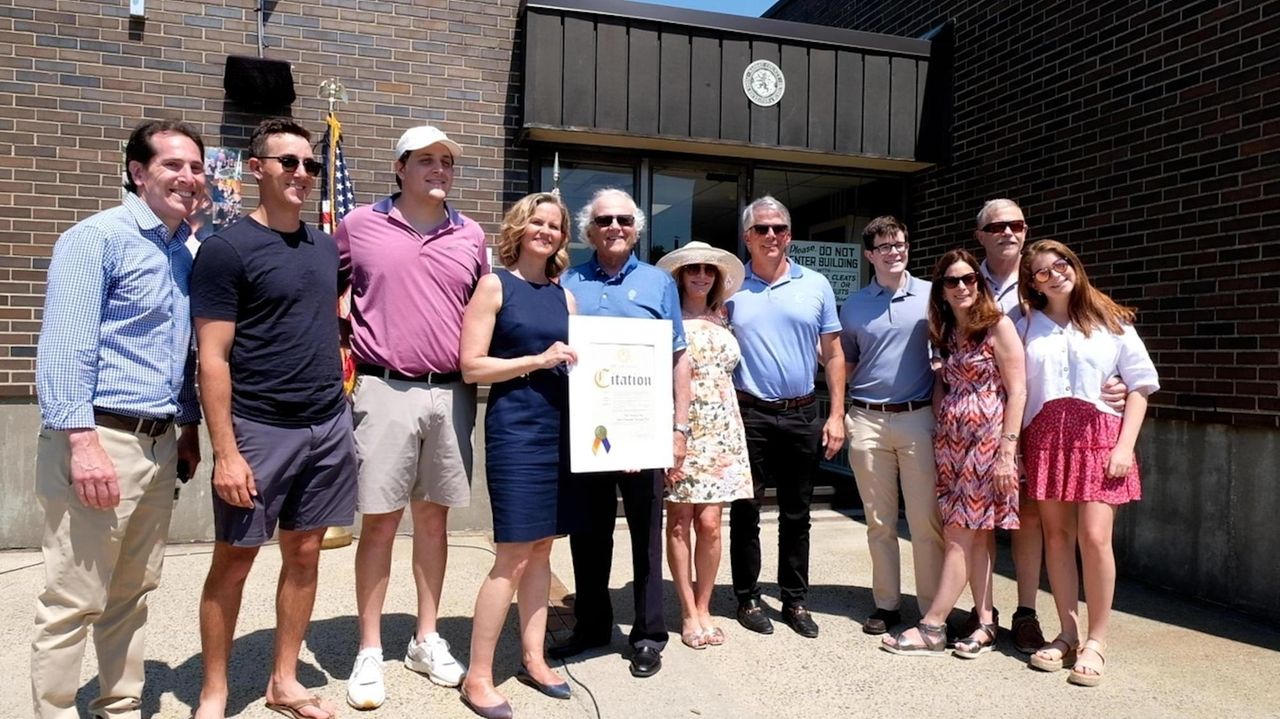 The North Woodmere Park Community Room in Valley Stream on Sunday was renamed for Sylvia Kaminetsky, who spent decades making her Long Island community a better place before she died in November at the age of 87. Credit: Jeff Bachner

"The people who come and use this park will see Sylvia’s name, they will ask questions about her life, and they will understand the importance of civic duty, of being involved in politics in one way or another, in being involved in making the world a better place," Curran said at a ceremony at the park.

Dozens of family members and friends braved Sunday’s heat to join Curran and other officials at the sun-splashed park to remember Kaminetsky, who spent decades making her Long Island community a better place before she died in November at the age of 87.

Kaminetsky, of North Woodmere and New York City, volunteered for many years at Franklin General Hospital in Valley Stream, which now is Long Island Jewish Valley Stream hospital. She was active at her temples — Temple Hillel in North Woodmere and Sutton Place Synagogue in Manhattan — and served as election coordinator for the Town of Hempstead.

"Whatever it was that needed doing, she did it," Curran said.

Kaminetsky was the biggest supporter of her husband Irving’s campaigns for commissioner of Sanitary District 1, a position he held for 40 years, besides being the president of the Republican Club of North Woodmere. Irving Kaminetsky thanked Curran, a Democrat, for supporting efforts to honor his wife of 67 years despite their political differences.

"Party politics didn’t mean anything," Irving Kaminetsky said. "It is the right thing to do."

Hundreds of friends and family members signed an online petition earlier this year to dedicate Cliffside Avenue for the longtime activist in North Woodmere, where the Kaminetskys lived for more than 50 years, although ultimately officials decided to honor Kaminetsky by naming the community room after her.

"It’s not about winning or losing, it’s about helping people who are your neighbors," Kaminsky said at the ceremony Sunday.

Jared Kaminetsky of Manhattan, became emotional as he remembered spending many happy days with Sylvia and Irving in their North Woodmere home.

"I just want to say how wonderful it is that this room in this park is dedicated to my grandmother, so that her presence can invoke happy memories for generations in this neighborhood," he said.

It's Farmers Market Week all over the land, LI included
LI's Capobianco reaches second Olympic diving finals
Jones Beach concertgoers can take the bus
These restaurants, employers, colleges and NYC theaters will be requiring COVID-19 vaccines
0:47
MTA employees must be vaccinated or tested weekly, Cuomo says
$70M Hicksville project would move downtown closer to transit-oriented reality
Didn’t find what you were looking for?