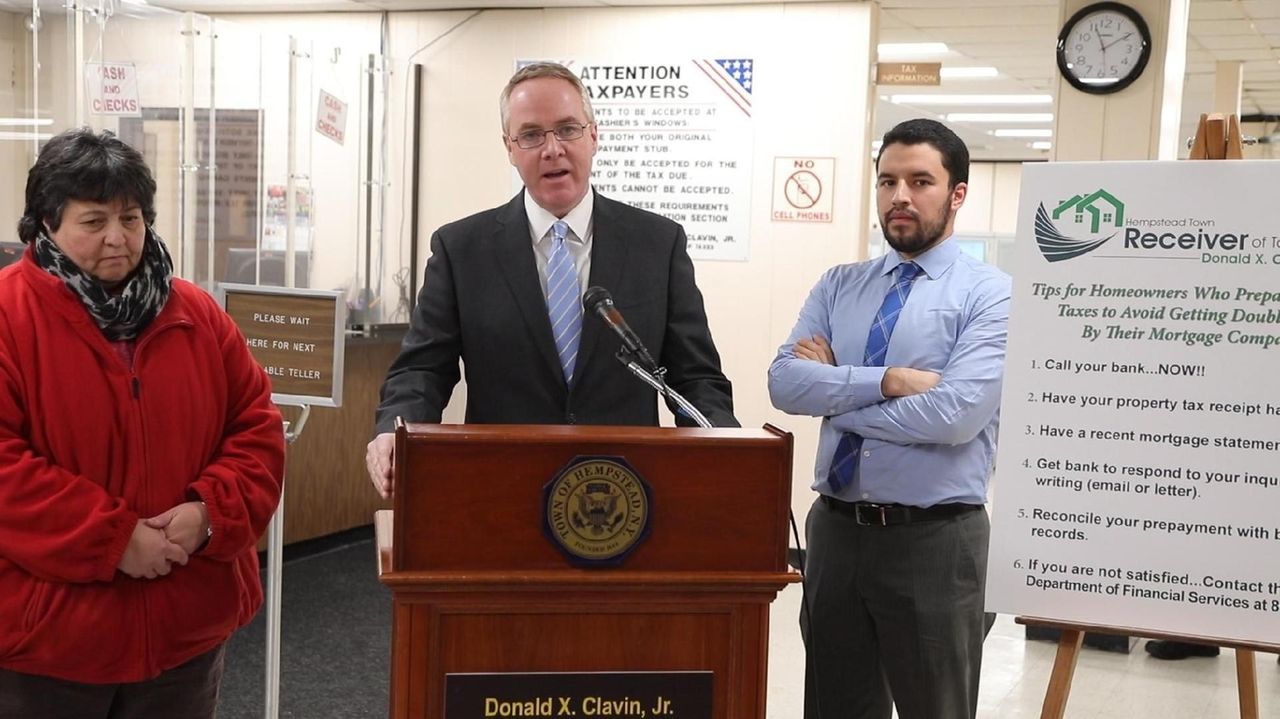 On Monday, Jan. 8, 2018, Hempstead Town Receiver of Taxes Donald Clavin is scheduled to urge property owners who prepaid their 2018 taxes to consult with their mortgage companies to avoid getting double-billed. Nearly 10,000 town residents visited Clavin's office during the final week of 2017 to prepay their 2017-2018 second-half school taxes and 2018 general taxes in the hope that they'd be able to claim a deduction. Credit: Newsday / Yeong-Ung Yang

Suffolk County town tax receivers are dealing with hundreds of property tax overpayments after Long Islanders last week rushed to prepay their 2018 taxes in the hopes of claiming a deduction as their mortgage companies submitted the same bills.

Town tax receiver offices were inundated last month between Christmas and New Year’s Eve as thousands of property owners rushed to pay their taxes following an executive order from Gov. Andrew M. Cuomo allowing prepayment in municipalities such as Nassau County that previously banned it. In Suffolk, however, prepayments were already allowed.

Now tax receivers are trying to sort out prepayments from residents who may have double-paid their 2017-2018 second-half school taxes and 2018 general taxes because their mortgage companies also submitted payments. Suffolk County’s deadline is Jan. 10, while Nassau’s is between Feb. 10 and 13.

Southampton Town Receiver of Taxes Theresa Kiernan said Monday that her office has processed $1.6 million in overpayments from 307 property owners, and she expected the figures to increase.

What questions do you have about the tax overhaul?

She said the mortgage companies had already begun to process tax payments for Suffolk when Cuomo’s executive order was issued, prompting a flood of residents to mail in or drop off their payments in person and thus double-pay the bill.

“At that point, most of the banks were already in process and it was too late to stop them,” she said.

Laurie Zaneski, Riverhead’s tax receiver, said her office was still processing duplicate payments Monday and she couldn’t estimate how many property owners had overpaid. She said some residents prepaid the full amount, while others paid half and hope the mortgage company’s portion would cover the remainder.

In Nassau – where the deadline is next month – town tax receivers are not yet faced with the same issue.

James Stefanich, Oyster Bay’s tax receiver, said his office usually gets “large-volume mortgage escrow payments” a few days before the February deadline. Then he would be able to see how many refunds he would need to process.

How the new tax laws may affect athletes

Hempstead Town tax receiver Donald Clavin, however, urged residents to consult with their mortgage companies immediately before getting double-billed.

“They need to take steps to protect themselves,” Clavin said Monday morning at a news conference. “You want to double-check exactly what that bank does.”

Clavin recommended that residents have their temporary tax receipts and most recent mortgage statement handy when they call, as well as get the mortgage company’s response in writing.

Hempstead residents prepaying their school and general taxes on Sunday, Dec. 31, 2017, received free coffee while they waited. Hempstead Town Receiver of Taxes Donald Clavin estimated that about 10,000 people came during the past week to prepay their taxes and he said he could count the number of complaints "with one finger."