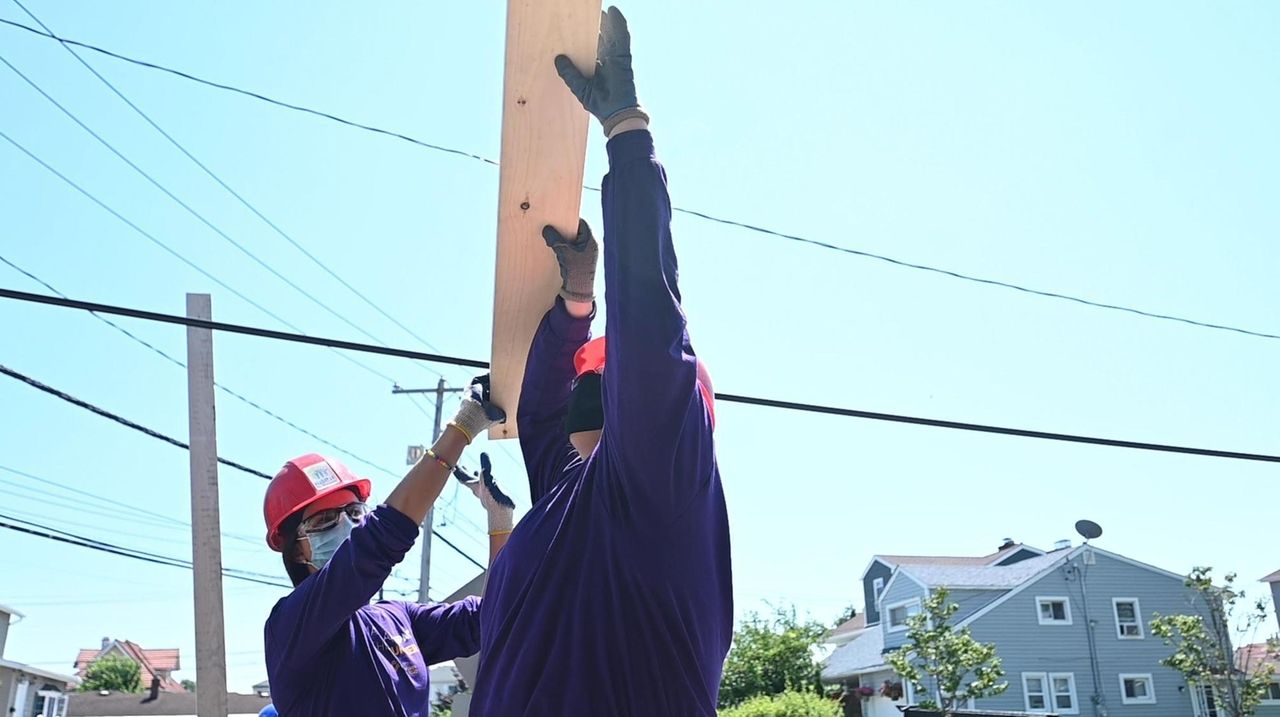 Teens volunteering with Jewish youth organization NCSY have dedicated their summer to helping rebuild the home of James Hodge, chairman of the MLK Community Center in Long Beach, whose house was destroyed in 2012 by superstorm Sandy. Credit: Newsday / Alejandra Villa-Loarca

As he delivered meals to others, Hodge’s house, destroyed in the storm, sat empty next door, and he was unsure where he would sleep each night.

“I slept on cots, floors, couches at a friend’s house and a vehicle from time to time,” Hodge said. “I didn’t want to depend on anyone too long and wanted to help everyone else out. I lived like a nomad. Nobody knew that. They would see the smile and no one knew what happened at night.”

Now Hodge will finally see his home rebuilt eight years after it was flooded.

A group of Orthodox Jewish teens from around Long Island, New York City and New Jersey is volunteering every day with the Orthodox Union’s National Conference of Synagogue Youth and Habitat for Humanity. The organization has done charitable projects around the world since Hurricane Katrina devastated New Orleans in 2006.

More than 100 teens are volunteering every day to work around the MLK Center and rebuild Hodge’s house. The Orthodox Union has worked with the MLK Center for two years to promote community service and partner the Jewish and African American communities.

Organizers noticed the shell of Hodge’s home next door and he agreed to work on a $70,000 renovation project to rebuild it, complete with new walls, cement, windows, electricity and plumbing. They hope to finish the work by the fall.

“Teens are the future leaders, and we’re encouraging them to play an active role in the community around them and to improve life for everyone around them,” said Rabbi Ethan Katz. “Our plan and goal is to be there when James moves into his house, fully furnished and equipped and befitting a man of James' stature in the community.”

Hodge, who was laid off in April by the city of Long Beach, has been the MLK Center’s chairman since Sandy. He said he grew up doing homework at the MLK Center, which is next to his childhood home, and getting help for his family.

“It was more than just a center; it’s a life-saver and a hub that gives a ray of hope, and I was able to get food when I was younger and my family was poor,” Hodge said, holding back tears. “It has given me life, and when I walk through the doors of the MLK Center and all it has given me, I try to do what I can for others and bring the community and the City of Long Beach together.”

Teens are fundraising for the project and also adding improvements at the center, including planting a vegetable garden. Groups of up to 20 teens each day pay $50 to $100 to volunteer and may partner with schools in the fall. Katz said the volunteering and beautification projects are meant to teach the tenets of the Jewish religion.

“We show people to encourage a better life and eat healthier and lead a more qualitative life,” Katz said. “The fundamental values we focus on are repairing the world. We are commanded to repair the world and make it a better place.”

What: Rebuilding the home of the center’s chairman, James Hodge, that was damaged during superstorm Sandy in 2012; doing a beautification project that includes adding a vegetable garden