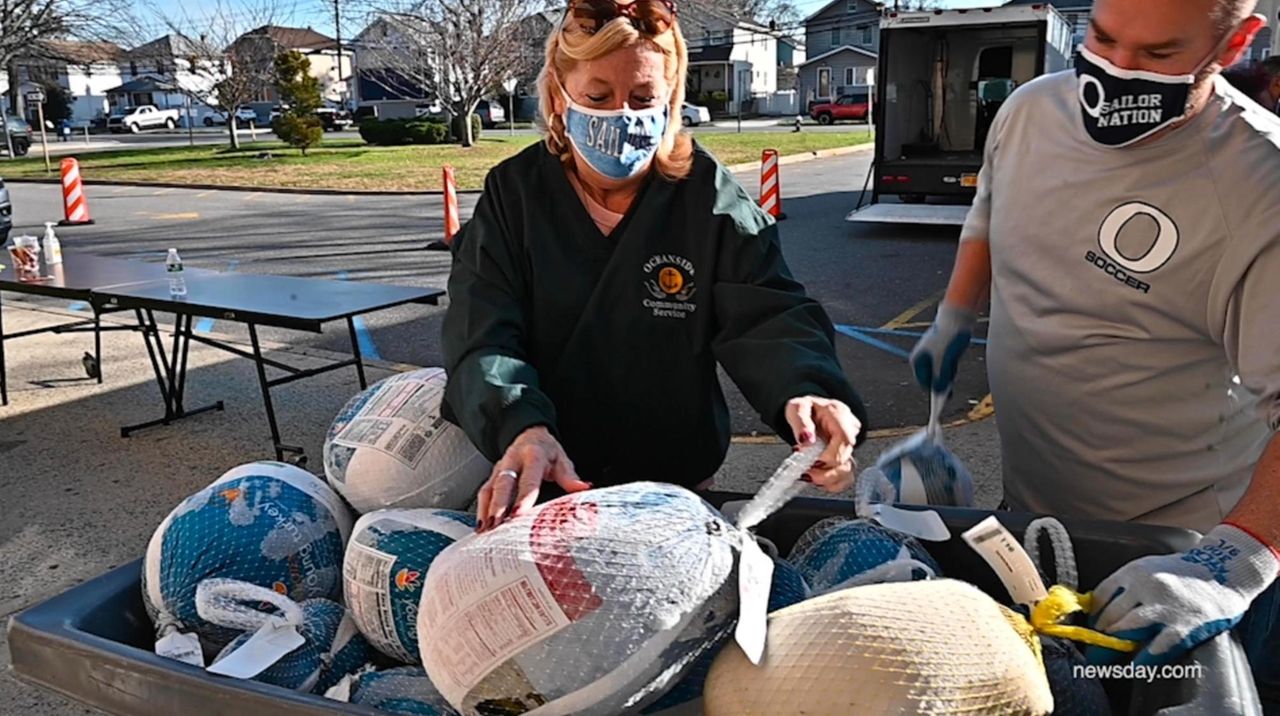 The hundreds of people in line in Roosevelt and the steady stream of cars in Shirley to pick up donated Thanksgiving meals were signs of a holiday transformed by the effects of COVID-19.

The turkeys, sweet potatoes and other vegetables that were part of the bags of food that Harvest for the World distributed from its Roosevelt pantry offer "a semblance of a normal life, of a normal Thanksgiving" to people struggling financially, said Joanna Bell-Richards, the group’s executive director.

Without the donated food, "there’d be no turkey," said Emma Antepara, 58, of Hempstead. "It would be chicken. Turkey is too expensive."

Antepara lost her 24-hour-a-week job as a babysitter in March, because the family she worked for "didn’t want me in the house for fear of getting infected" with the coronavirus. Her 34-year-old son, who lives with her husband and her, is an airline counter agent who was out of work for months because of the sharp drop in flights, and now works only 16 hours a week.

Until this year, they had never visited a food pantry, Antepara said.

"I never thought of that, because we all worked," she said.

Bell-Richards said before COVID-19 there were 75 to 100 people every day at the pantry. In March, that shot up to 550, and now there are about 340 on average. On Saturday, the group also gave away children’s coats.

The Shirley event was part of Feed the Hope, a group of 12 churches in four states that gave away food on Saturday.

"When you talk about building community and building hope, you want the family to gather around the table with food as the centerpiece," said Kenny Engasser, a deacon at Shirley Assembly of God who helped organize the event.

Most cars received three big boxes of fresh produce, milk, yogurt, juice and other items, along with a $20 gift certificate to buy a turkey.

Victor Calabro, 64, of Shirley, said Saturday was the first time he had picked up donated food.

He promotes bands that play in Long Island restaurants and bars, and, with the pandemic, "there’s no work," he said.

"Most of this food, I’m going to give to my tenants, because they’ve been out of work since March and they’re really suffering," Calabro said. Both are musicians, he said.

Tania Sevilla, 26, of Mastic, drove up in a car with two other women. All are housekeepers who work primarily in the Hamptons, and all have far less work than usual, largely because many clients don’t want them inside their homes because of the coronavirus. Sevilla’s husband is a landscaper with clients who now do the yard work themselves because they can’t afford to pay him.

"At least we can get together for Thanksgiving," Sevilla said in Spanish, referring to the couple and their four children.

Church volunteers offered prayers to those who wanted one. Doug Stretch, 67, said people fearful of the coronavirus asked him to pray with them for their health. Others told him about financial difficulties.

"People asked me to pray for jobs for them," he said. "Things are really tough."