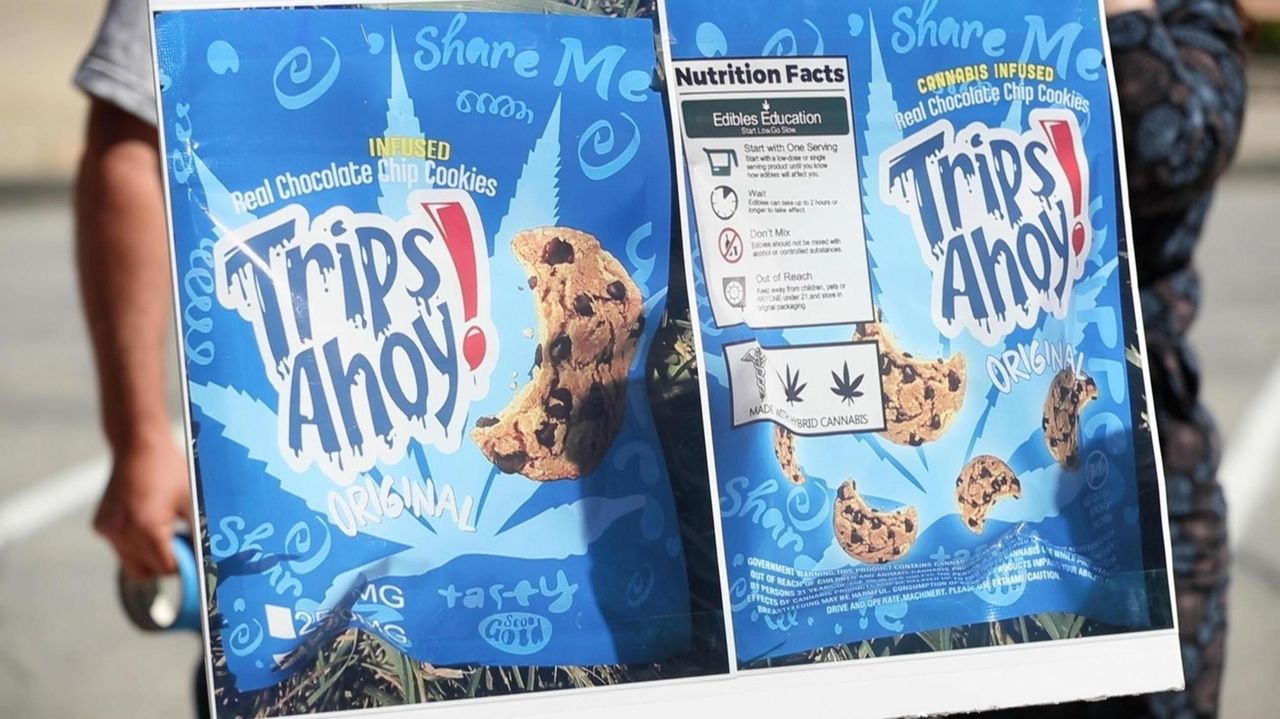 Elected officials, outraged over cannabis cookies they said were marketed toward kids, on Wednesday called for a ban on the chemical compound delta-8. Newsday’s Cecilia Dowd reports. Credit: Kendall Rodriguez

Long Island elected officials are calling on the state health department to ban a cannabis extract they say is found in cookies marketed to children.

Long Beach PTA members and the school district warned parents that cookies designed like Oreos and Chips Ahoy were being sold as "Stoneo" and "Trips Ahoy."

State Sen. Todd Kaminsky (D-Long Beach) and other officials called Wednesday on the state Health Department to ban the THC chemical known as delta-8 this is found in the cookies.

He described delta-8 as a loophole because the natural hemp extract is being sold legally; legalized marijuana, which is regulated, goes on sale next year. Traditional marijuana carries a THC of delta-9.

"We’re here to talk to parents about the dangers in their own community and urge the state to ban delta-8, a very dangerous chemical being sold in our stores because of a loophole that needs to be closed," Kaminsky said. "This packaging is clearly targeted at children in a dangerous way. It's alarming it could end up in hands of children having an afternoon snack."

State legislators urged the public to contact the health department to urge them to ban the cannabis compound.

The New York Health Department is holding a 45-day comment period to review a ban on delta-8 and other cannabis related products.

State health officials said Wednesday that comments were being considered through July 19, which could result in a ban on delta-8 products that do not follow the state's hemp program. It remains legal under medicinal marijuana.

A Long Beach paramedic, who is also a member of the PTA, said EMTs responded to a call last week to an elderly couple and another person who had ingested the cannabis cookies and experienced a low heart rate, dehydration and a 12-hour high.

"When you look at the packaging, it could get in the hands of children and could be devastating," Long Beach school board member-elect Alexis Pace said.

Long Beach police said they checked with each of the city's licensed CBD dealers and found the cookies at a hemp and CBD store, Dr. Nature Rx. on Park Avenue.

The store agreed to stop selling the cookies, but still sells other delta-8 products.

Store owner Jason Katz said all products were sold only to those 21 and older. He said he supported selling cannabis products for medicinal use.

"I've never sold to any kids," Katz said. "I’m not sure about a ban …. People need to educate themselves about what things are available. I’m not selling anything if it causes any controversy for parents, I'm not dealing with any nonsense."

Kaminsky said the products were available at other convenience stores on Long Island and online.