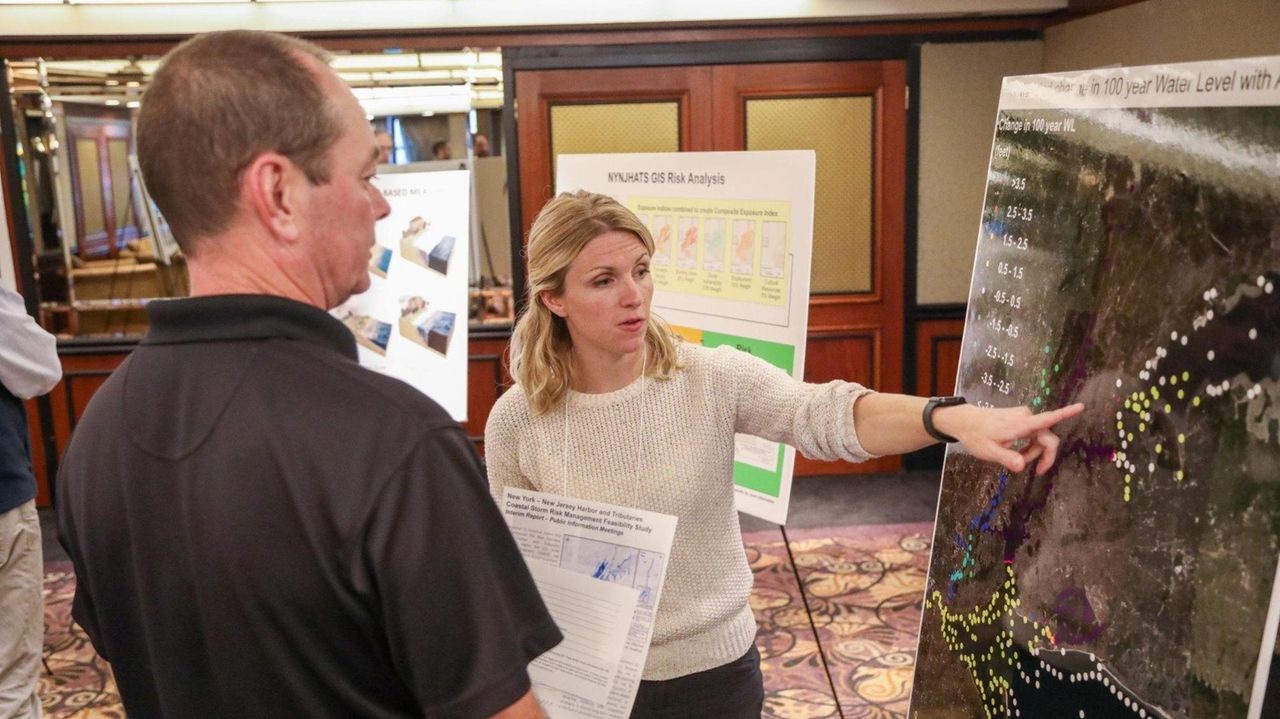 The U.S. Army Corps of Engineers discussed on Thursday the agency’s most updated plan to build a massive, mile-long surge barrier near the Throgs Neck Bridge, which would help prevent flooding into New York City from the north. Credit: Newsday / Shelby Knowles

Hundreds of Long Islanders packed a Great Neck hotel ballroom Thursday to voice their concern over a mile-long floodgate near the Throgs Neck Bridge, saying it would increase flooding and damage the environment.

The storm surge barrier proposal, which was meant to prevent flooding into New York City, was detailed by the U.S. Army Corps of Engineers in a 136-page report released in February.

Renee Himmel, who lives three blocks away from the water in Port Washington, was one of about 250 people who attended an Army Corps presentation Thursday.

“It’s obvious we are not benefiting from this,” Himmel said as she studied a poster placed on an easel before the presentation. “It’s important to save these areas. But we count, too.”

“Not only are we not benefiting, we are going to be annihilated,” said Susan Lopatkin, mayor of Kensington Village, who stood nearby. “This is like a little cork right here. You cork it up, it’s all going to spill.”

Officials and residents said while it’s important to protect New York City, the communities on the north and south shores of Long Island Sound should not be sacrificed as collateral damage.

“We understand the needs to protect Manhattan from flooding,” North Hempstead Town Supervisor Judi Bosworth said in a press conference Thursday. “We saw what happened during superstorm Sandy, but we don't want to be the designated spillway.”

Bosworth and other officials said local communities are concerned with “induced flooding,” which is often caused by man-made structures, and decreased water quality, given that the barrier would interrupt the natural flow of the water and migratory fish.

The barrier was one of a long list of surge gates, levees and other mitigation measures the Army Corps laid out to avoid the type of damage Sandy caused in 2012.

Bryce Wisemiller, a project manager with the Army Corps, said measures would be taken to mitigate potential induced flooding, which could mean up to two feet more of flooding than what the storm would have already caused.

“For induced flooding, we have to mitigate that fully,” he said, though the agency does not yet know how much those measures -- including elevating shorelines, raising homes and offering buyouts -- would cost.

“We don’t want anyone affected by induced flooding,” Wisemiller said when speaking to a resident, noting that part of the goal is to raise awareness of the risk of storm surges. “The idea is we don’t lose any more lives to” storm-caused flooding.

Army Corps officials said they are working on a draft report to finalize a plan and they expected the plan to come out in July. And what follows would be more meetings for public feedback.

“All of this stuff could happen or none of it would,” said Michael Embrich, a spokesman for the Army Corps, referring to a number of storm-prevention and mitigation features the agency included in the February report.