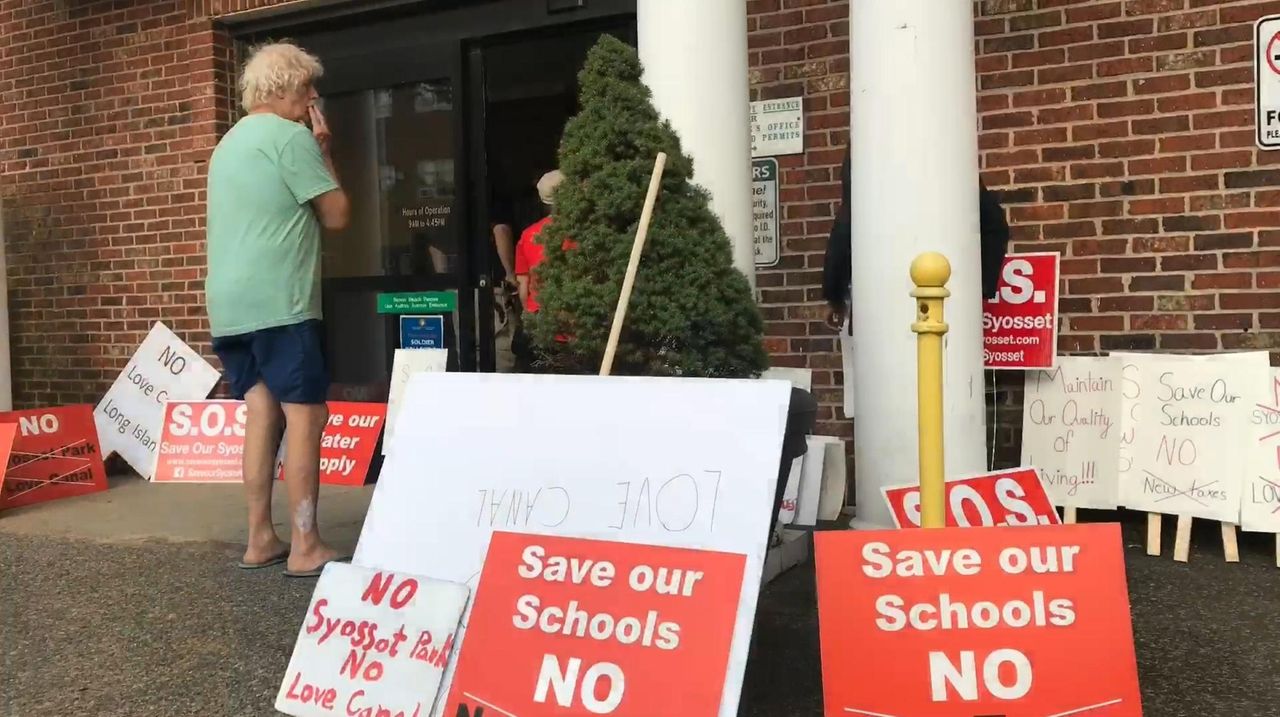 A Nassau County police officer, who did not identify himself, on June 26  told residents they could not take signs into an Oyster Bay Town Board meeting at Oyster Bay Town Hall. Oyster Bay’s rules of decorum for town board meetings do not prohibit signs from being brought in. Credit: Newsday / Ted Phillips

Nassau County police stopped residents from taking signs into an Oyster Bay Town Board meeting last week, an action that came as a surprise to some town officials.

Neither Oyster Bay nor other municipalities in Nassau County have regulations prohibiting signs at meetings.

“I’ve never heard of any rule on that,” Councilwoman Rebecca Alesia said inside Town Hall about the action outside on Tuesday.

Dozens of residents going to the 7 p.m. meeting after holding a nearby rally against a proposed mixed-use development called Syosset Park were told they could not take their signs into the meeting.

A Nassau County police officer, who declined to identify himself, stood at the Town Hall entrance and told the residents they couldn’t take signs in that were mounted on sticks. He then said they couldn’t take any signs into the building.

“You’re going to have people sitting and then people sitting in front of them, and we don’t want them obstructed,” the officer told the group as he pantomimed holding a sign above his head. He added that signs with sticks attached were a safety issue.

The residents laid about two dozen signs — some handmade and others machine printed in bright red and white — in front of Town Hall as they walked in. One sign read “Save our schools No new taxes” while another read “Save Our Water Supply.”

The proposed Syosset Park project would be built on a former Superfund toxic waste site, which has raised concerns among residents about the impact on the environment as well as on the local school district and traffic.

Jason Guo, 47, a computer architect from Syosset, said he tried to take a paper sign into the meeting but was stopped by police.

The town’s rules of decorum for board meetings, which were adopted in April 2016, provide for the removal of individuals who make “offensive, insulting, threatening, insolent, slanderous or obscene remarks,” but do not prohibit signs from being brought in.

Town spokesman Brian Nevin said outside the meeting that police, not the town, were stopping people from taking signs inside. Town Attorney Joseph Nocella said during a break in the meeting that he didn’t know about residents having to leave signs outside.

“This is the first I’m hearing about it,” Nocella said and declined to comment further.

A Nassau County police spokesman directed queries about the signs to the police legal department, which did not respond.

Nassau County spokesman Michael Martino said in an email that the county has no ordinance prohibiting signs from being taken into public meetings and “the county was not involved” in the action in Oyster Bay.

“It’s inconsistent with the principles of free speech and open debate at public meetings for the Nassau County police to require that signs be kept outside a town board meeting held in Oyster Bay,” Gottehrer said. “The town of Oyster Bay should be welcoming of free speech and participation in their democratic processes.”

Town Supervisor Joseph Saladino did not respond to a request for an interview about the signs.

Hempstead and Glen Cove do not prohibit signs at meetings.

“Neither the rules of procedure nor Town Code prohibit noncommercial signs in Town Board meetings,” Hempstead spokesman Michael Fricchione said in an email.

A representative of North Hempstead did not respond to queries about the town's policies.