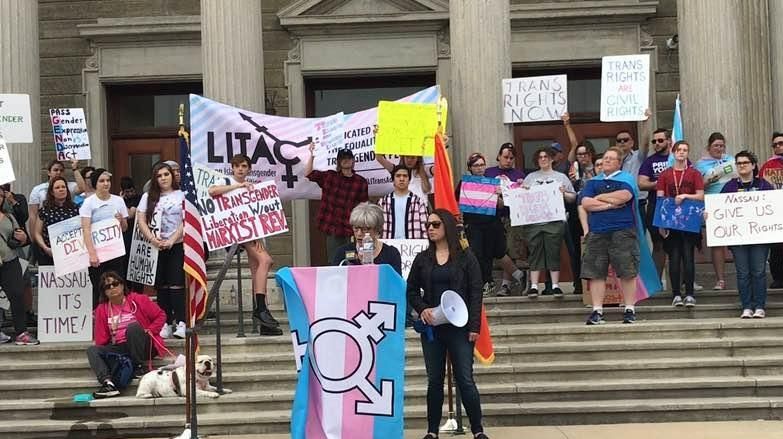 Advocates for transgender rights marched to the Nassau County Legislature Building in Mineola Sunday to fight for equal protections on Long Island and beyond.

Hoisting signs with messages such as “Trans lives matter,” more than 100 people rallied to pressure Nassau County officials to recognize transgender and gender-nonconforming people in its human rights law.

Juli Grey-Owens, a transgender community activist who organized the event, said the trans community has been pleading with county officials for years to pass an amendment that would prevent discrimination in employment, housing and public access.

“Nassau County remains the largest county in New York State to not have laws protecting the transgender community,” Grey-Owens said. “Our community will no longer be silent. We will not rest until we have our rights.”

The bill, called the Gender Expression Non-Discrimination Act, has never reached the floor of the Republican-dominated legislature.

“Local government should be protecting everybody equally,” she said. “That’s our job.”

In a statement, County Attorney Carnell Foskey said: “There’s zero tolerance under the law for any form of discrimination in Nassau County.”

“I am a transgender male and New York needs to have more rights and laws to protect us,” the Centereach resident said. “For me going to high school, most days were ‘Who is going to hurt me, who is going to say something to me?’ just for being who I am.”

There is no statewide law barring discrimination against the transgender community. The Assembly passed GENDA on April 30 for a 10th time; it has not yet passed in the State Senate.

Joanne Borden, 91, a transgender woman who transitioned seven years ago, spoke to the crowd gathered Sunday about optimism. “I know we are winning the fight because they no longer ignore us.”