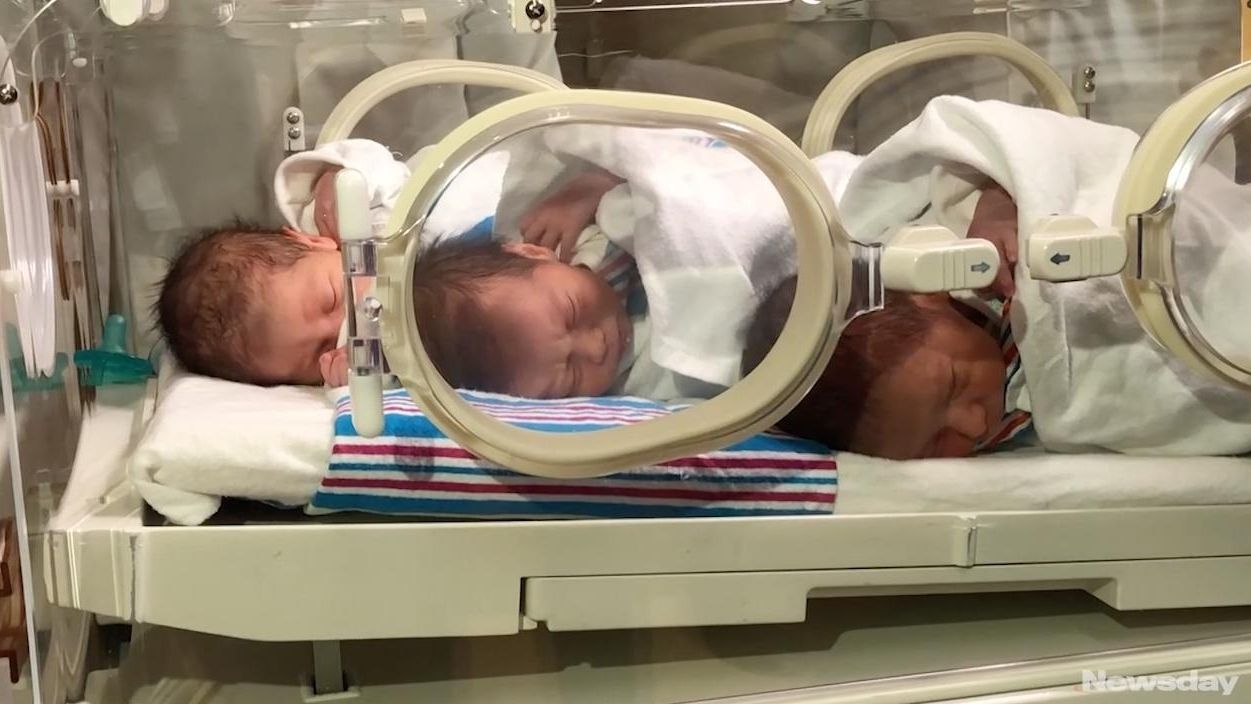 Triplets born Wednesday, Jan. 24, 2018 to Maria Escobar, 32, and Jose Hernan Guevara Amaya, 33, of Hicksville are the first triplets to be born at Nassau University Medical Center in East Meadow since 2016.

Two is company and three’s a crowd — unless you’re the lucky parents of Nassau University Medical Center’s newest set of triplets.

Maria Escobar, 32 and Jose Hernan Guevara Amaya, 33, of Hicksville, welcomed a set of triplets at NUMC in East Meadow on Wednesday. Along with hospital staff, they celebrated not only the arrival of their first children, but a successful end to a difficult journey, as triplet pregnancies are challenging and uncommon.

The birth marked the first set of triplets delivered at NUMC since July 2016.

The trio was conceived naturally and delivered by Caesarian section at 10 a.m. on Wednesday and weighed 4 pounds each — “For triplets, that’s a pretty healthy weight,” said Dr. Victor Politi, president and CEO of the hospital.

Escobar and Amaya said Friday they were thrilled to meet their new family, a fraternal set of girls Katy and Alison and their brother Steven. The babies are healthy, but spending some time in the neonatal intensive care unit because of their size.

“I’m very thankful for the team here,” Amaya said in Spanish through a translator.

Escobar laughed when asked if she was thinking about more children.

Hospital officials said there was a triplet boom in the 1990s, but in the last 20 years, the boom subsided. While in vitro fertilization tends to yield more cases, naturally conceived triplets are even less common. Dr. John Riggs, chairman of Ob/Gyn at the hospital, said naturally conceived sets only occur in 1 in 10,000 births.

“This was a very remarkable experience we went through,” Riggs said. “Without this team effort, we wouldn’t have such a successful outcome.”

Triplets are almost always born around a month or two early. They also usually come with complications for both the babies and the mother, Riggs said, and doctors initially thought they lost Escobar’s babies at 16 weeks.

Escobar suffered what’s known as an incompetent cervix, where the weight and pressure of carrying three babies at once caused the cervix to open up and begin labor prematurely. It was a frightening moment, both the family and the doctors said: 50 percent of all cases lead to the loss of the pregnancy and the condition leaves mothers at high risk for serious infection.

The staff at NUMC were able to save the babies in surgery and Escobar carried until 36 weeks, a week short of full term.

“It’s a very happy day for us here,” Politi said. The mom and dad are “looking forward to many, many happy years with their three new children.”