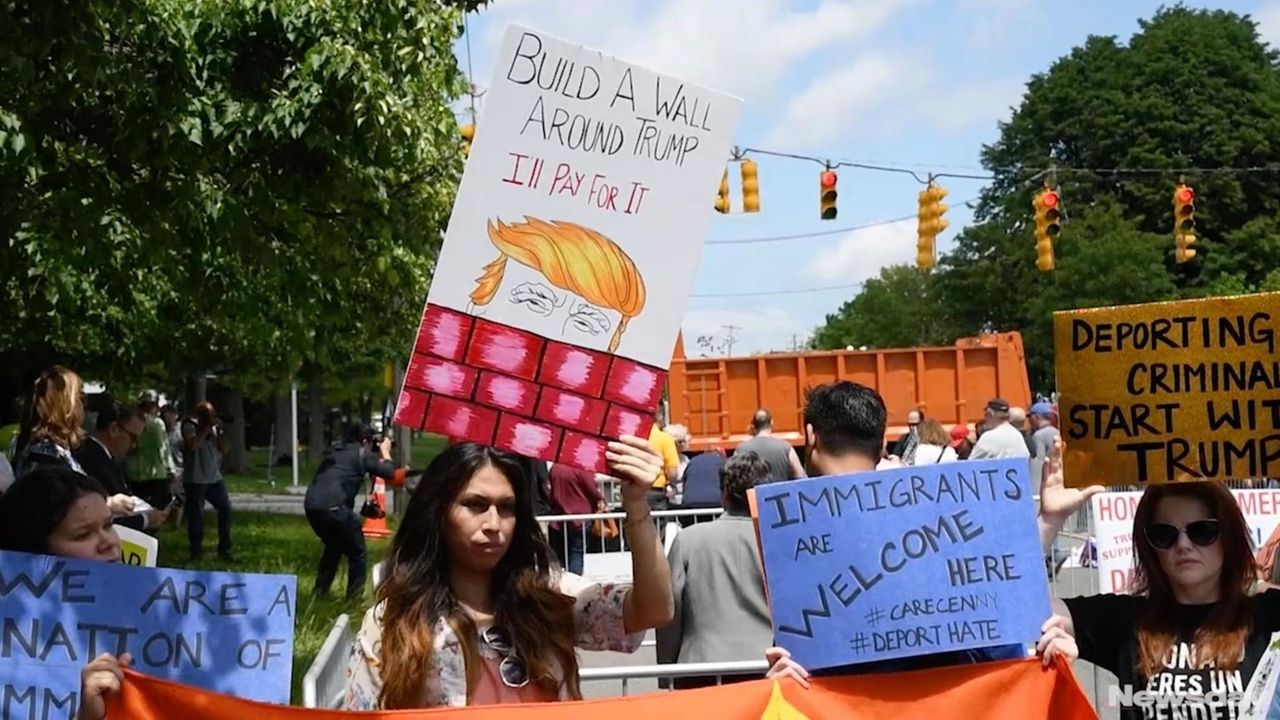 More than 60 protesters, chanting “stop playing politics with our lives” and carrying signs, demonstrated Wednesday in Bethpage for more than two hours before President Donald Trump’s arrival for a roundtable summit on MS-13 and gang violence.

The protesters, who dispersed before Trump reached Bethpage, were not alone. Not far from them, a group of about a dozen Trump supporters made their presence known, saying they welcomed the president and his policies.

And in Manhattan, dozens of protesters — some ringing bells and noise makers — gathered outside the Lotte New York Palace Hotel late Wednesday afternoon as Trump attended a campaign fundraising dinner inside.

The Bethpage protesters said their message was that the president is exploiting fears of gang violence as a way to attack immigrants. 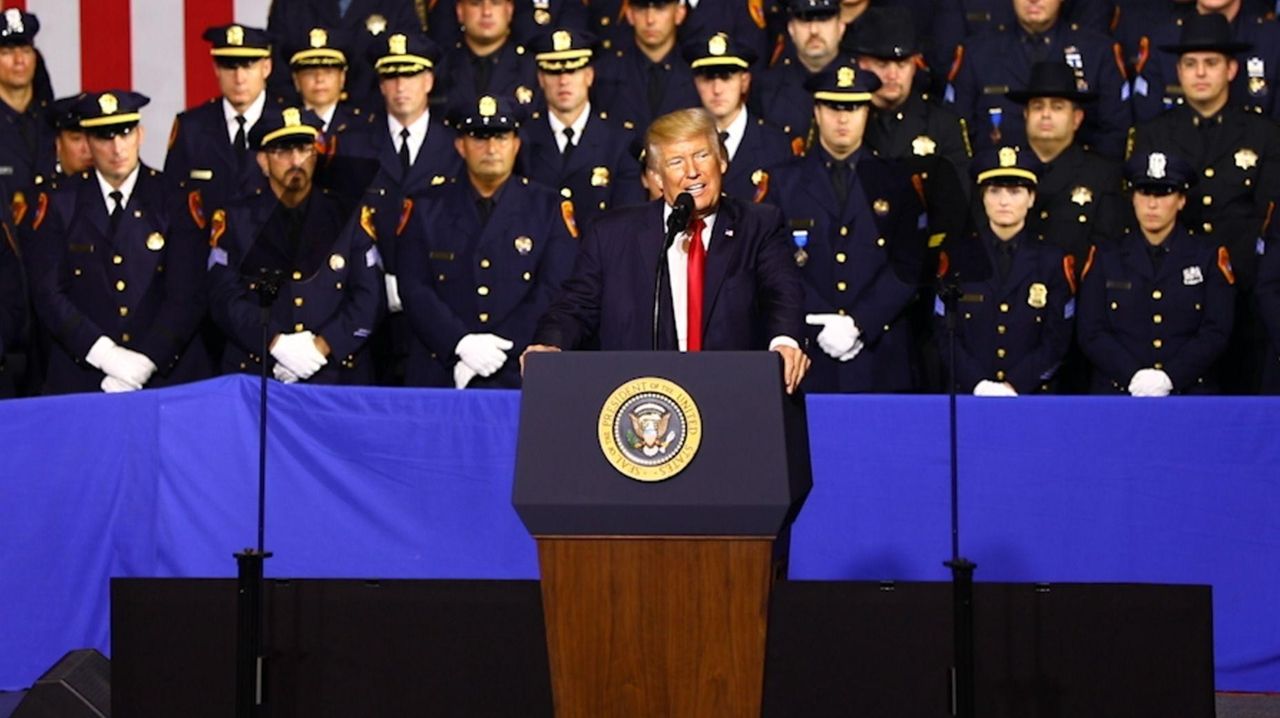 Angel Reyes, Long Island community organizer for a civil rights group in Manhattan called Latino Justice, said Trump was “using MS-13 as an excuse to advance his anti-immigrant agenda” and deport all immigrants who are in the country illegally.

“We know there have been a lot of raids to supposedly search for MS-13,” said Reyes, a DACA recipient who said he would fight potential deportation to Peru. “But they’re taking a lot of undocumented immigrants” who are not affiliated with MS-13.

She cited Trump’s use of the word “animals” to describe people he was expelling from the country, saying that the president, who was reacting to a California sheriff’s criticism of sanctuary state policies, should not pretend it was “solely directed toward MS-13.”

“When he announced his campaign, the first thing he did was attack the immigrant community,” Damas said, referring to Trump’s June 15, 2015, speech in which he said many Mexican immigrants were “rapists” and criminals. “From day one, he’s referred in virulent terms to the immigrant community. It’s something he’s done again and again.”

LI gang slaying victims' parents get nod in SOTU President Donald Trump highlighted the pain of Nisa Mickens' parents, Robert Mickens and Elizabeth Alvarado, and Kayla Cuevas' parents, Evelyn Rodriguez and Freddy Cuevas, during his first State of the Union speech on Tuesday, Jan. 30, 2018. He outlined his immigration proposals after introducing the teary-eyed parents of the Brentwood teens, who were killed in 2016 by alleged MS-13 gang members. Credit: YouTube / NBC News

Silvia Garcia of Brentwood, where much of the MS-13 gang violence on Long Island has played out, said Trump was capitalizing on the region’s tragedy to foster his agenda.

“President Trump comes to Long Island to build his profile and mobilize an agenda of hate based on our local pain,” Garcia said.

Across a set of metal barricades from the protesters were about a dozen Trump supporters, including Patricia Dwyer of Manorville, who said immigrants should thank Trump for making their communities safer by fighting gangs like MS-13.

Counter-protester Joan Mills of Patchogue said she blamed weak borders for the flow of illegal drugs into the United States — including the heroin that took the life of her 26-year-old son, Christopher Daly, who she said died of an overdose in 2016.

“He’s trying to do everything he can,” Mills said of Trump. “It starts with border control, and we have to remove the gang members already here. We shouldn’t have to live in fear.”

Just before 7 p.m. Wednesday, Trump’s motorcade left the Manhattan fundraiser to jeers from the protesters.

Whistles rang out and protesters yelled and cursed as Trump’s motorcade turned onto Fifth Avenue.

“I think we showed solidarity, there were a lot of different groups here,” said Upper East Side resident Gail Eisenberg, 52, of Wednesday’s protest. “I think that is wonderful the coalition building. I think that is something that was accomplished.” With Alison Fox

LI immigrant advocates protest Trump visitLong Island immigrant advocates rallied ahead of President Donald Trump's planned visit to Bethpage to say they do not welcome him and that local officials should reject his rhetoric. Latest news: Trump presidencyGet complete coverage of U.S. politics, including the 45th president, his administration and Congress. Highlights from Trump’s LI speechPresident Donald Trump is visiting Long Island today, speaking to local law enforcement officers at the police academy at Suffolk County Community College in Brentwood. The president is expected to focus his remarks on the rash of gang violence Long Island has been experiencing at the hands of the MS-13 street gang. Here are live updates from before, during and after Trump makes his remarks. LIers react to visitPresident Donald Trump spoke to Suffolk communities hard-hit by gang violence and vowed to help police eradicate the MS-13 gang. Trump grew up in Queens and said he was surprised by the gang violence. Long Islanders shared their reactions to the speech on social media.