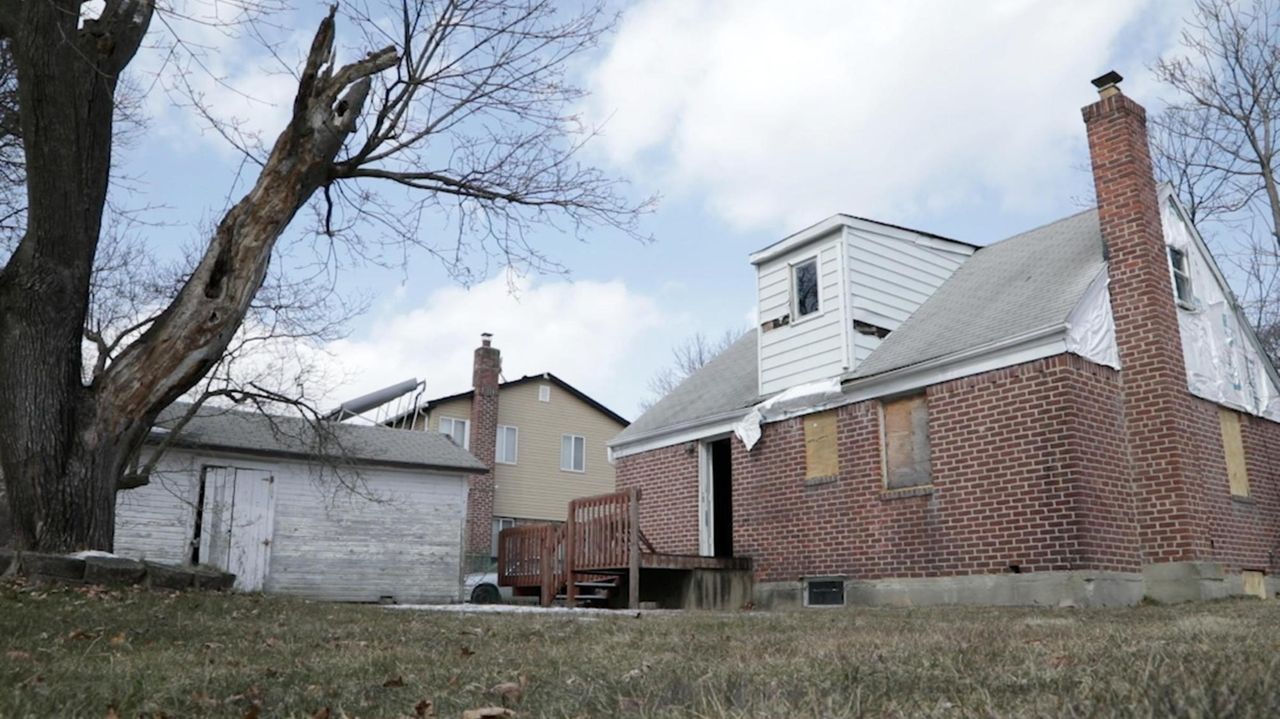 The Uniondale Community Land Trust on Thursday held a kickoff event in front of a Macon Place house that it plans to reconstruct and make into an affordable home. The boarded-up home has been abandoned for years. Credit: Newsday / Yeong-Ung Yang

The Uniondale Community Land Trust held a kickoff event in front of a Macon Place house, which it plans to reconstruct and sell as an affordable home. The boarded-up house has been abandoned for years, said land trust president Paul Gibson.

Uniondale residents had noticed dozens of these zombie homes in their neighborhoods — houses that were in foreclosure and had been abandoned — falling into disrepair. The land trust was formed in 2010 with a quest to improve and stabilize areas with such homes. After holding summits and coming up with a model for how to operate, the nonprofit began collaborating with organizations on a mission to turn zombie homes into affordable housing, Gibson said.

The land trust’s vision is to “create a group of homes throughout Uniondale that can provide opportunities for households to build wealth, stabilize the community and in the process contribute to community empowerment,” Gibson said at the event, which Nassau County Executive Laura Curran and Hempstead Town Supervisor Laura Gillen attended.

According to Attom Data Solutions, a California-based real estate data company, in 2018 Suffolk and Nassau counties had 610 and 377 zombie homes, respectively, the  greatest numbers in the country.

Curran said that having organizations  such as the land trust means “we can really begin to aggressively make a dent” in the zombie home epidemic.

Gillen called the land trust a “great model for us to address this crisis.”

“We have two big problems in Nassau County and the Town of Hempstead: zombie homes and [lack of] affordable housing, and you’re tackling both with this land trust,” she told the crowd.

The four-bedroom, two-bath 1,350-square-foot home will take four months to renovate using grant money, organizers said, and a lottery will be held to pick the new owners, who must earn 50 to 80 percent of the average median income for Nassau County, which in 2017 was $108,133. They must also be able to secure a mortgage and will have to take home buyer training, Gibson said.

The land trust, comprising representatives from the fire department, school district and other community groups, purchased the home for $165,000 with funding from the nonprofit Long Island Housing Partnership. The land trust will maintain the deed to the land that the house is on, Gibson said, lowering the purchasing cost of the house and ensuring that the home will continue to be affordable.

“We now take a zombie home off the block, put it back on the tax roll," Gibson said. "We bring in a family that probably couldn’t afford to live in Uniondale but will get that leg up, and the way the ground lease is structured, it encourages them to stay,”