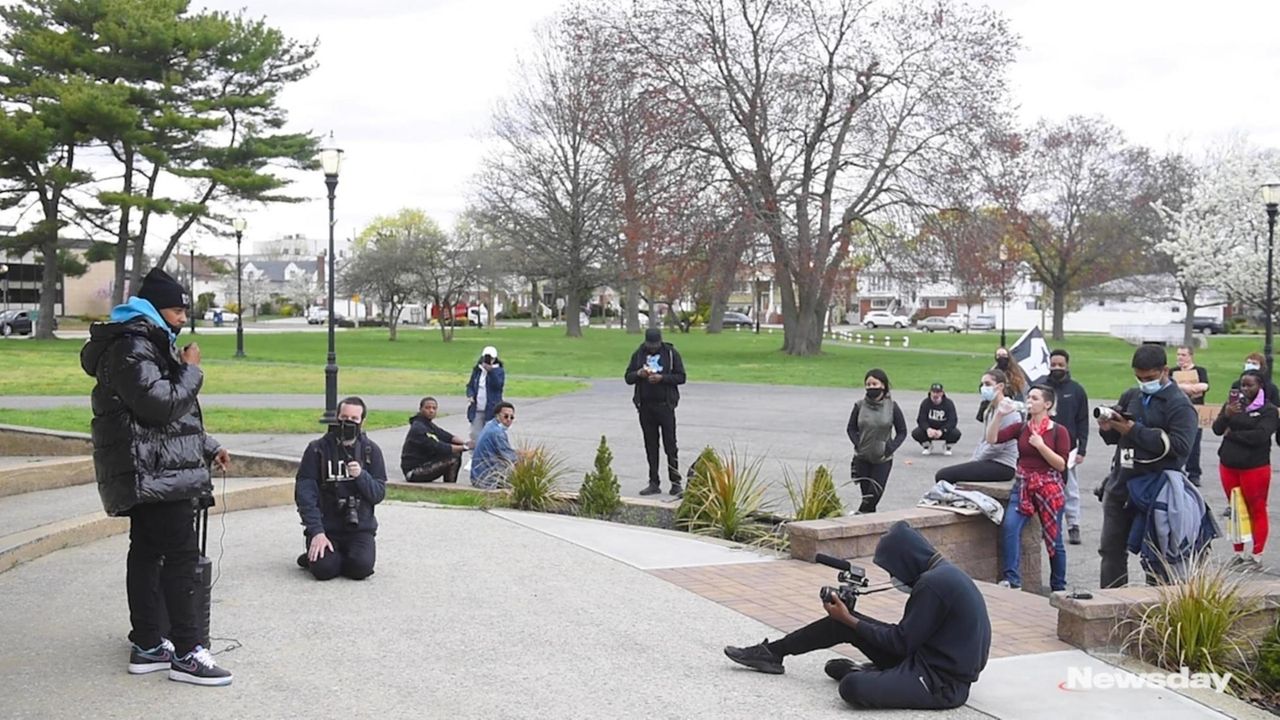 Protesters gathered in Valley Stream on Saturday over the killing of Daunte Wright by a suburban Minneapolis police officer. Credit: Johnny Milano

Like other speakers and participants at a protest Saturday in Valley Stream against the April 11 killing of Daunte Wright by a suburban Minneapolis police officer, Robin Costa said she was "tired."

"We’re tired of seeing people being killed by the police for no reason — for stupid reasons, for traffic stops," said Costa, 63, of Hempstead.

More than 60 people rallied outside the Valley Stream Long Island Rail Road station and then marched in the surrounding neighborhood, shouting slogans such as "Say his name, Daunte Wright," and carrying a large black and yellow banner that said, "Daunte Wright. Too many marches, too many names."

Wright, a 20-year-old Black man, was shot dead by police Officer Kim Potter after a traffic stop in Brooklyn Center, Minnesota. Potter later resigned and was charged with second-degree manslaughter in connection with Wright’s death.

"I’m tired of turning on the news and hearing about somebody else that a police officer mistakenly [shot] or they were scared," said Latoya Bazmore, 42, of Bay Shore, alluding to how Potter’s police chief said she meant to fire a Taser at Wright rather than a gun. "Where’s the training? Whenever you go into a job you get trained. The problem with the police is they train each other to be racist."

Mason, who is Black, said she has been stopped repeatedly by the police and followed, especially while in majority-white neighborhoods visiting friends, and she has been asked why she was driving in those areas.

"I’m afraid to even have children of my own because I don’t want them to experience what I have, or worse," she said.

In addition to the shooting of Wright, Adam Toledo’s death was on the mind of Anseer Khan, 36, of Valley Stream.

Police bodycam video released Thursday showed a Chicago police officer fatally shooting Adam Toledo, a 13-year-old Latino, on March 29 after the boy appeared to have dropped a handgun and was raising his hands.

He added that police shootings on video get wide media attention, but everyday police abuse does not.

Khan is worried about his children, Adan, 6, and Aveena, 16.

"I’m not always going to be there," he said.

Cop, police chief resign 2 days after Black motorist's deathPolice Chief Tim Gannon and Officer Kim Potter both resigned two days after the death of 20-year-old Daunte Wright. Potter, a 26-year veteran, had been on administrative leave following the shooting. Police: Minnesota officer meant to draw Taser, not handgunThe officer who fatally shot a Black man during a traffic stop apparently intended to fire a Taser, not a handgun, as the man struggled with police, the city's police chief said. In New York, there were protests and marches in response to the killing.