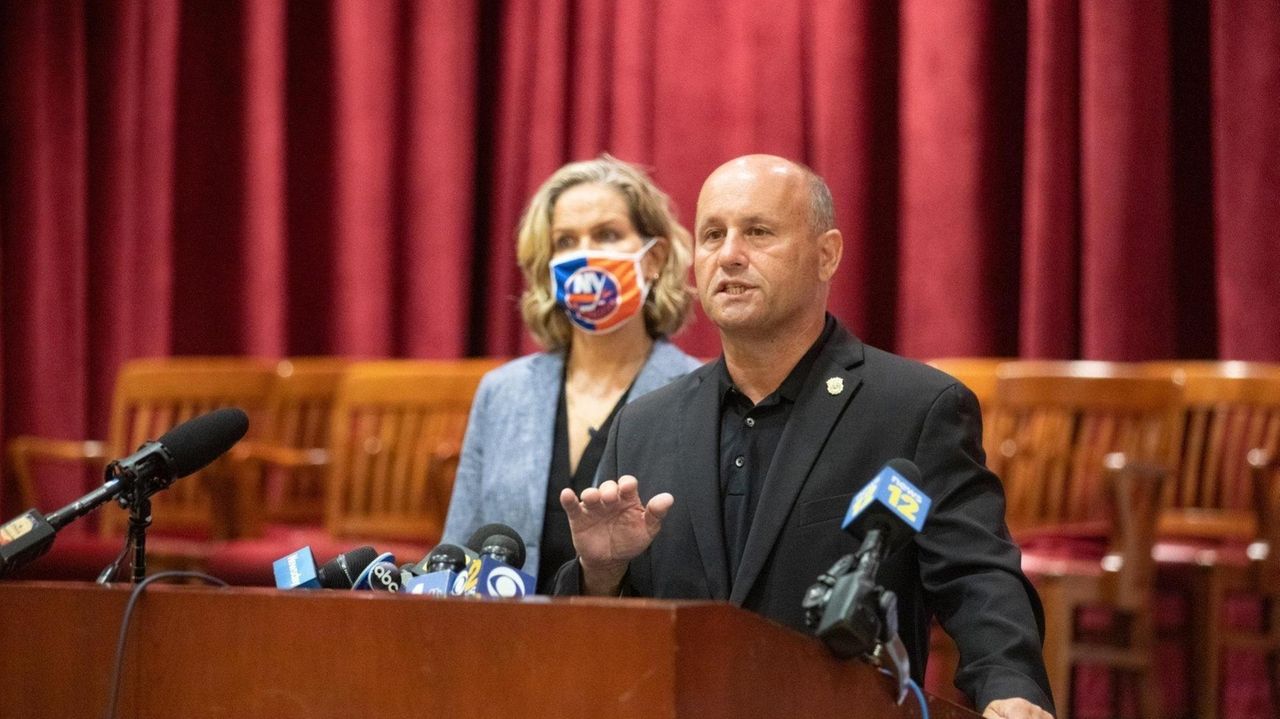 Nassau County Police Commissioner Patrick Ryder said at a news briefing Tuesday that two neighbors involved in a long-running dispute in Valley Stream have filed multiple complaints about each other and that police are investigating.  Credit: Newsday / Raychel Brightman

Nassau County officials asked for patience from community members Tuesday as an investigation continued into a Black Valley Stream woman's allegations of being racially harassed by a neighbor.

County Executive Laura Curran advised those concerned about the Nassau police department probe to "take a deep breath and let the experts do their jobs and sort out what the facts are."

Curran spoke at a news conference in Mineola with Nassau Police Commissioner Patrick Ryder to discuss the claims of Jennifer McLeggan, 39.

McLeggan said Monday she has been subjected to repeated harassment from her neighbor since moving into a home on Sapir Street four years ago.

She had posted a sign on her door detailing what she said was a yearslong pattern of racial harassment.

An image of the sign had been retweeted 42,000 times as of Tuesday night, bringing widespread attention to the dispute from elected officials, activists and residents. Activists marched through Valley Stream Monday night to show support for McLeggan, and another protest is planned for Thursday.

At the Tuesday news conference, Ryder said the objective of the briefing was to dial back community tension and explain that the investigation will take time.

Ryder said there's a long history of documented complaints between McLeggan and her neighbor.

"Since 2017 when [McLeggan] moved into the residence," he said. "There's been close to 50 calls for services between the two, almost equally, complaints back and forth … that we have responded to."

Ryder said officers recently visited the home McLeggan shares with her 2-year-old daughter after social media posts showed an image of the sign on her door that stated she feared for her life were brought to their attention.

"We went out. We interviewed her at length. We took a long statement from her," Ryder said. "We also went and we spoke" to the neighbor.

The man has a pellet rifle and a pellet handgun, Ryder said, and both are used legally in his backyard to shoot at targets.

The neighbor could not be reached for comment Tuesday.

Curran said officials will not hesitate to release information from the investigation when it becomes available.

"I want to make it very clear that hate crimes and bigotry have absolutely no place here in Nassau County," she said.

Cops investigating allegations of racial harassmentA Black Valley Stream woman's accusations of being targeted by a neighbor due to her race have caught the attention of elected officials, activists and residents.