John Venditto leaves court in Central Islip on May 24 after a federal jury acquitted him of corruption charges. Credit: James Carbone

Former Town of Oyster Bay supervisor John Venditto has asked a judge to dismiss state corruption charges against him, with his lawyer arguing in part that the longtime Republican power broker never got anything of value out of an alleged conspiracy involving a town paving contractor.

The request follows a federal jury’s May 24 acquittal of Venditto, 68, of North Massapequa, on separate corruption charges.

Manhattan defense attorney Joshua Kirshner asked in court filings dated June 8 for a change of venue outside of Nassau County and the release of grand jury minutes. The defense also wants charges that involve only former town planning and development Commissioner Frederick Ippolito, now deceased, to be purged from indictments that name Venditto. 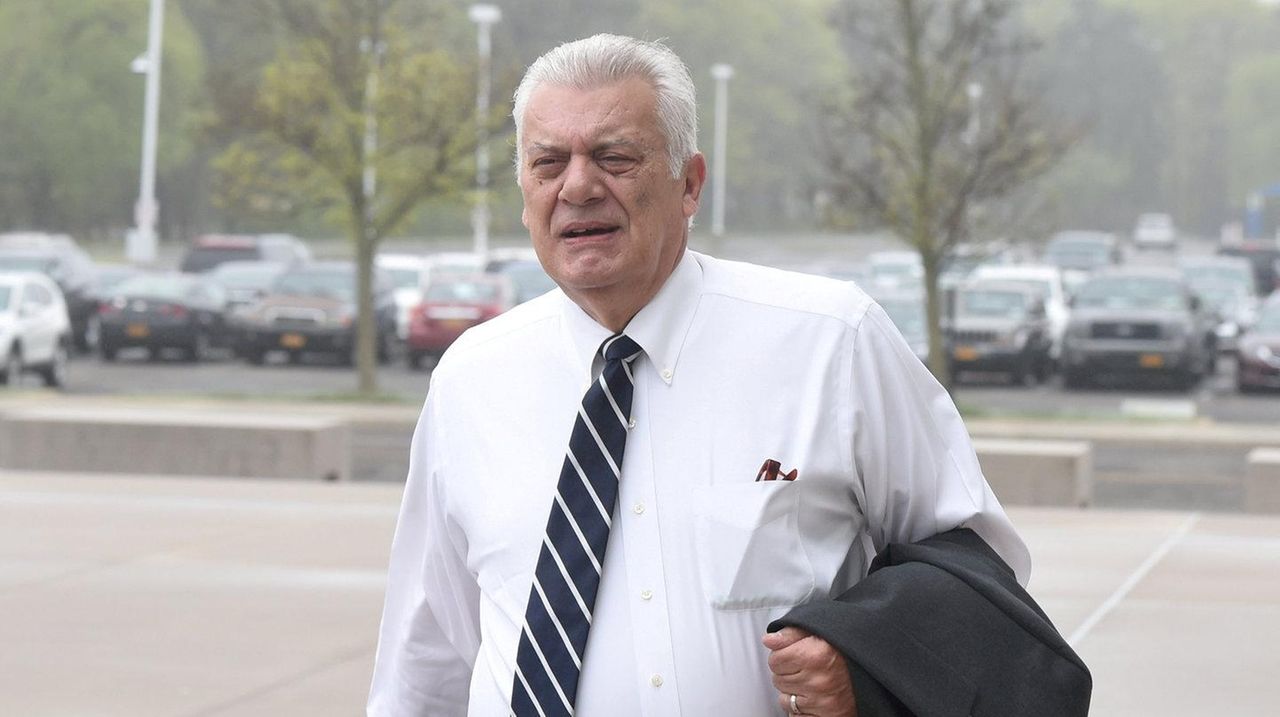 Kirshner referenced Venditto’s recent U.S. District Court acquittal in the court papers, while also saying federal prosecutors investigated “the facts in this case” and “passed on them.”

The defense attorney argued that “notably absent” from the indictment charging Venditto with conspiracy, defrauding the government and official misconduct “is any allegation that Mr. Venditto received anything of value from any co-conspirators in exchange for his support of these transactions.”

Venditto’s attorney wrote that the prosecution’s theory that Venditto was aware and conspired with Ippolito, and for Ippolito alone to accept bribes, so the Lizzas could sell an Engel Street asphalt plant property in Hicksville to the town for less than it was worth “makes no sense.”

He said the same about the government’s theory that Venditto conspired with Ippolito so the Lizzas would get approval to rezone a nearby recycling plant property Oyster Bay “desperately needed” for affordable senior housing.

Kirshner said Venditto, as a Town Board member, supported Oyster Bay’s purchase of the Engel Street property to facilitate the rezoning application for the development of Cantiague Commons — housing that never got built — but that Venditto’s involvement was “strictly limited” to that role.

Some of Kirshner’s arguments parallel those in a dismissal motion an attorney for the Lizzas filed in April.

“We just received the motions and will be responding before the next court date,” Singas spokesman Brendan Brosh said Tuesday.

Garden City attorney Susan Carman argued in court papers that the allegation that the Lizzas conspired to bribe Ippolito to get favorable treatment on paving bids, rezoning approval for the property that was to become Cantiague Commons, and to advance the Engel Street asphalt plant sale “makes no sense.”

Carman wrote that according to prosecutors, her clients would have bribed Ippolito to sell a lucrative property for less than its value, get approval for a property rezoning “the town desperately wanted” for affordable senior housing, and needed help of a newly-hired public official to get paving contracts they’d been “routinely winning” for years.

Defense filings also argued that wiretap evidence doesn’t support the district attorney’s theory, referencing a taped talk between Venditto and Richard Porcelli, Venditto’s ex-campaign manager, about how the Lizzas lost in the end.

“Now they have no plants and they got a dirt pile,” Venditto said — presumably about the asphalt and recycling plants.

“Yeah, we hurt them,” replied Porcelli, who also was indicted.

The Lizzas’ attorney also wrote that their payments to Ippolito — who worked for the family before the town — were a “commission” after he negotiated for Elia Lizza the return of money a sibling allegedly stole from their father’s estate and that Ippolito disclosed the “consulting” work to the town.

But prosecutors have alleged Elia and Marisa Lizza paid Ippolito $1.6 million from 2009 to 2016 for his role in negotiating anticipated payments in excess of $20 million to Elia Lizza from the Cantiague Commons developer, while Ippolito was controlling oversight of the developer’s rezoning application and site plan approval.

They’ve alleged Ippolito negotiated the asphalt plant sale to the town to further the housing project, and that Ippolito and Venditto advocated for the purchase while concealing Ippolito’s financial interest in the housing deal.

Separately, Venditto’s lawyer also argued for the dismissal of charges related to an allegation he conspired to fire a town employee for Ippolito’s benefit, with the defense saying that employee “was caught spraying swastikas on town property more than one time.”

Venditto not guilty; jury deliberating on ManganosJurors acquitted former Oyster Bay Town Supervisor John Venditto on all corruption-related charges, delivering a partial verdict in the trial that also includes former Nassau County Executive Edward Mangano and his wife, Linda. Editorial: Respect for a jury of one’s peersIn one sense, the proceedings at the courthouse in Central Islip have been utterly typical. Power on Trial: Send us your questions"Whatever happened to that cupcake the defense attorney refused to eat?"

It's Farmers Market Week all over the land, LI included
LI's Capobianco reaches second Olympic diving finals
Jones Beach concertgoers can take the bus
These restaurants, employers, colleges and NYC theaters will be requiring COVID-19 vaccines
0:47
MTA employees must be vaccinated or tested weekly, Cuomo says
$70M Hicksville project would move downtown closer to transit-oriented reality
Didn’t find what you were looking for?