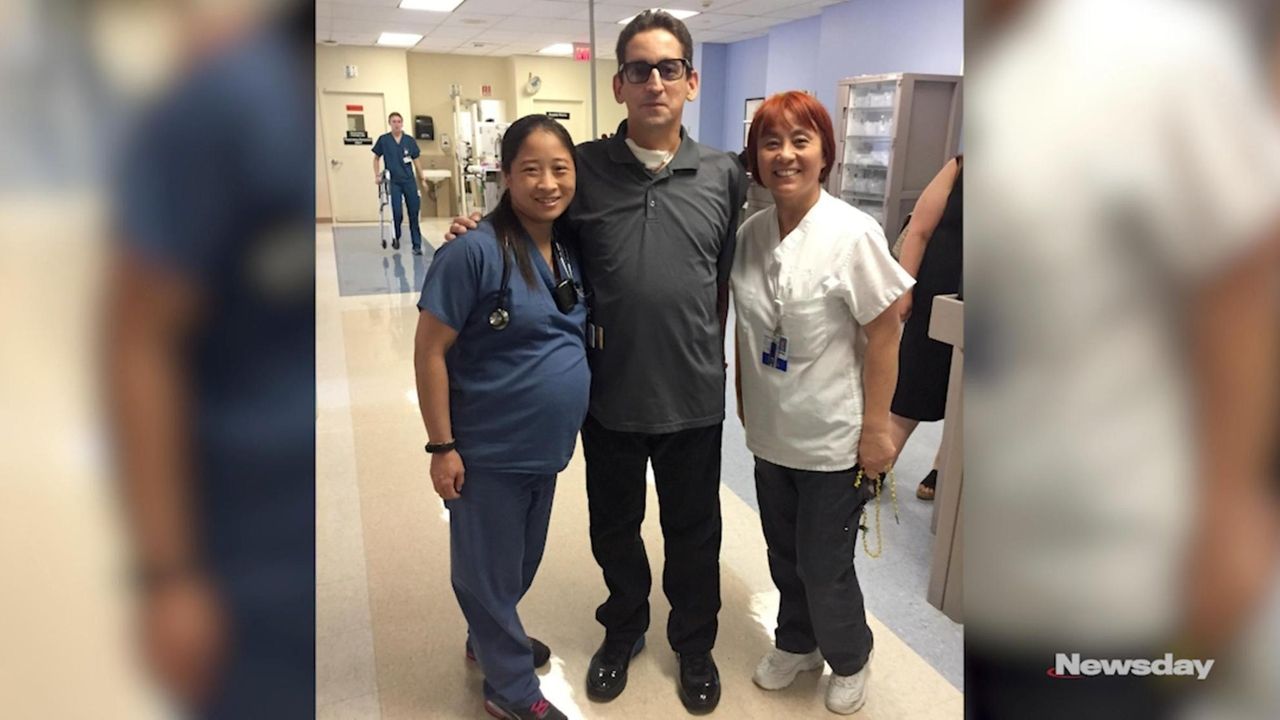 Veteran Michael Mendez slipped into a coma at Long Island Jewish Valley Stream hospital after struggling with organ failure and pancreatitis. On Friday, he thanked the staff of the hospital's intensive care unit for supporting him and his family while he was comatose for a month.  Credit: News 12 Long Island; Photo Credit / Northwell Health, Michael Mendez, The Mendez Family

Michael Mendez felt overwhelmed after he left the military in 2004, drinking heavily with post-traumatic stress disorder. Six months ago, his organs began to fail.

Pneumonia made it impossible for the Valley Stream resident to breathe on his own. Extreme pain from his pancreatitis forced him into the hospital. There, he slipped into a coma that stretched from hours into days, then weeks. Doctors wondered whether he would recover, expressing such grave concern that his family began arranging for the possibility of his death.

“He was into multiple organ failure, and anytime that happens, the risk of coming out of it is low,” said Dr. Lisa Chen, who cared for him at Long Island Jewish Valley Stream hospital. “But we didn’t give up on him.”

And he made it.

On Friday, Mendez reunited with hospital staffers there, whom he credits with bringing him back from the edge of death.

He says he has not had a drink since.

Mendez, who grew up in Queens, joined the Army shortly after graduating high school at 17.

In the infantry at the front lines, he was among the wave of American soldiers who hurtled across the Kuwaiti desert to drive out the Iraqi forces sent there by Saddam Hussein in the 1990 Gulf War. At just 18 years old, he found himself close enough to enemy soldiers to see them fire their weapons.

He said his experience left him struggling with PTSD. Coping with that after leaving the Army while trying to adapt to civilian life for the first time as an adult proved overwhelming. He said he began drinking heavily and would fly into rages even at minor provocations.

“It’s difficult to readjust when you come out of the military — just dealing with people on a daily basis. If someone tried to cut me off on the highway, or jump into a parking lot, I would explode,” Mendez said. “I was drinking a half gallon of alcohol a night, and I never missed a night.”

Mendez arrived at the hospital in July.

Chen, the hospital's director of critical care, said doctors struggled to stabilize him.

“We literally threw everything we had at him,” she said. “Antibiotics. Blood pressure medicine. We put him on a respirator.”

Mendez went into a coma. “Initially, he was not responding,” Chen said.

But after 31 days, he began showing signs that he was aware of his surroundings.

“One day when we called his name, he opened his eyes,” Chen said.

Although doctors expected him to need a stay at a rehab center, he was eventually able to leave the hospital under his own power, Chen said.

Now, Mendez sees himself as having been given a reprieve.

“Somebody up there didn’t want me,” he said.