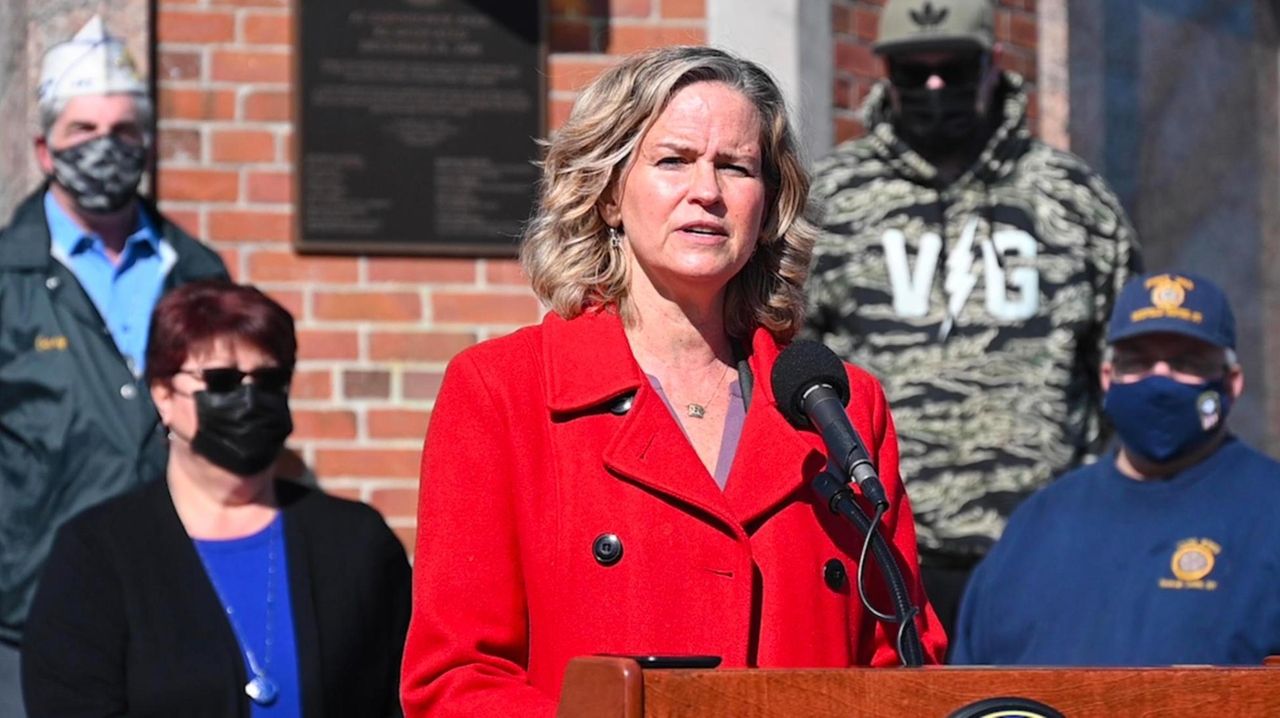 On Monday, Nassau County Executive Laura Curran announced a new war memorial that will break ground in the fall in Eisenhower Park, to commemorate those who lost their lives in the wars in Afghanistan and Iraq. Credit: James Carbone

Nassau County will build a memorial in Eisenhower Park to honor the most recent generation of veterans — the men and women who served and died in the Afghanistan and Iraq wars, officials announced Monday.

The county plans to break ground on the monument near the East Meadow park's Veterans Memorial in the fall, coinciding with the 20th anniversary of the Afghanistan conflict.

"We must ensure that present and future generations continue to appreciate the sacrifice that our veterans in all wars have made to protect our freedoms," County Executive Laura Curran said at a news conference at the proposed memorial site. "This is who we are and we have very much to be proud of as Americans."

The county is seeking to raise about $100,000 for the memorial, which will be built through a public-private partnership with Heroes Among Us, a Glen Cove nonprofit that supports veterans across the region. The group has already raised $10,000.

The organization was launched by Virginia Cervasio after her son, Angelo, who worked in communications management in the Air Force in Saudi Arabia and the Persian Gulf, took his own life in 2006. The Locust Valley High School graduate was 24 and suffering from post-traumatic stress disorder, Cervasio said.

"This memorial has a very special place in our hearts," said Cervasio, adding that vets who died from suicide after returning home will be included in the memorial.

The U.S. Census Bureau estimates that 4,281 Nassau residents have served in Iraq or Afghanistan since Sept. 11, 2001. At least 56 Long Islanders have died in the two wars, including 21 from Nassau County — 16 in Iraq and five in Afghanistan, according to Newsday records. Nationally 7,036 American soldiers have lost their lives in the two conflicts, records show.

"This is critically important for us, not only as a nation and a Long Island community but as a county to put up a memorial like this," said Tom Tack, a former Air Force fighter pilot and the site leader for Bethpage-based Northrop Grumman, which is helping to fund the memorial. "Its important for us as a company to participate."

Eisenhower Park already has monuments honoring each branch of the Armed Forces along with veterans who served in World War II, Korea and Vietnam.

An estimated 50,000 veterans from all military conflicts live in Nassau, Curran said.