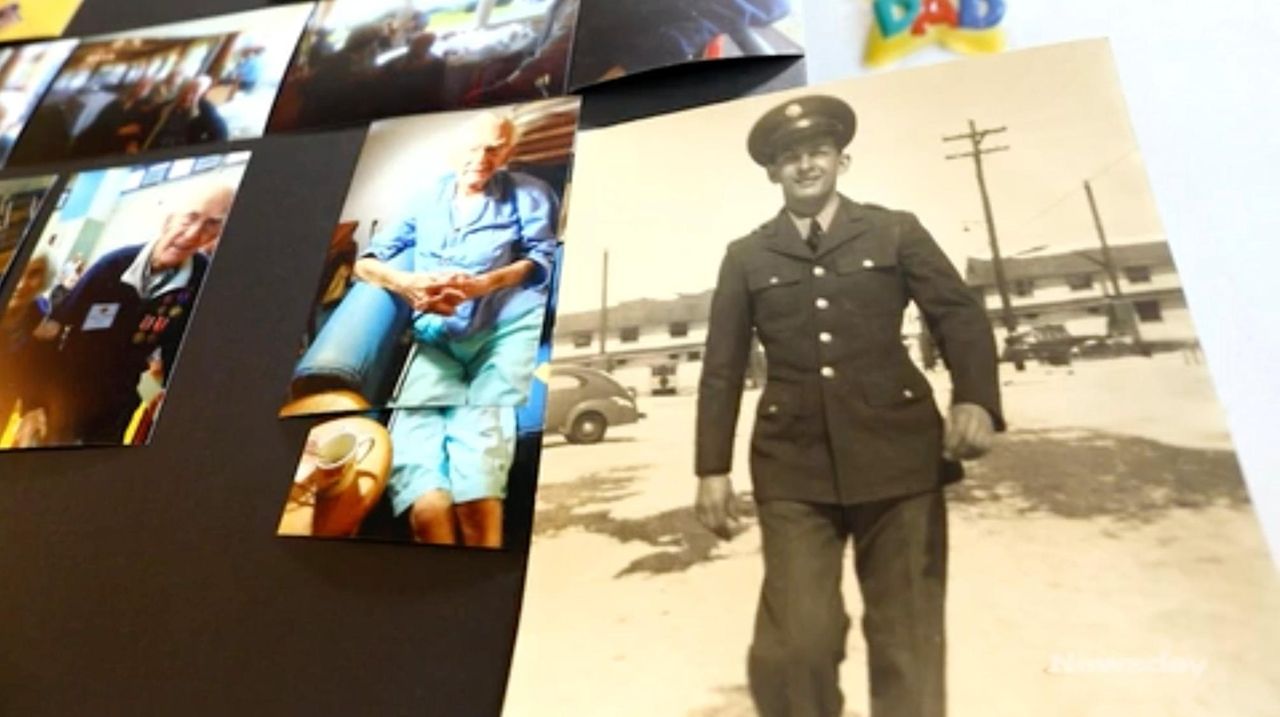 The late Stanley Niedzialek of Albertson chronicled his four months overseas during World War II. On the eve of Veterans Day, his words offer a glimpse into sacrifices the men and women in uniform make for their country. Credit: Newsday / Chris Ware; Chur Tourisme

Mission after mission had been scrubbed because of rain and fog.

So Stanley Niedzialek was raring to go when he learned he would man the tail gun aboard The Lady Patricia, a Consolidated B-24 Liberator bomber headed for Munich.

The date was Nov. 16, 1944, less than a year before World War II finally ended. Allied forces were bearing down on the Nazis from above, trying to beat back the offensive that Hitler was mounting on the Western Front — despite his inferior resources.

The danger was as palpable on the ground as it was in the air. Just before Niedzialek set off on what turned out to be his only mission, a buddy stopped in to say goodbye.

Little did he know how long it would take. But the brash Brooklynite — who later would put down roots in Albertson and work as a bookkeeper for the Long Island Rail Road until retirement — made good on his promise.

That mission is chronicled in a diary that Niedzialek kept during his four months overseas. He meticulously documented everything, from his capture as a prisoner of war, internment in Switzerland, to the daily grind of being an American soldier.

Today, on the eve of Veterans Day, his words give Long Islanders a glimpse into the big and small sacrifices that the men and women in uniform make for their country.

The memories of those who served in World War II carry even more significance as their numbers dwindle. Out of the 16 million who fought, about 389,000 are still alive, government numbers show. The U.S. Department of Veterans Affairs said that as of September, there were about 20,000 World War II veterans still alive in New York State and almost 16 million veterans of all U.S. wars surviving nationwide. There were about 540,000 veterans of all wars still alive in New York, the department said.

Niedzialek died Sept. 26 at age 96 at his home in Albertson, said his daughter, Teresa "Terry" Niedzialek, who lives upstate. He also is survived by his wife, Rose, and son, Paul, of Middle Village, Queens.

The diary begins on Sept. 11, 1944, the day Niedzialek and the other airmen with the 456th Bombardment Group of the Army Air Forces shipped out from Virginia for Foggia, Italy. The last entry was on Jan. 25, 1945, when Niedzialek returned to Boston Harbor aboard the transport ship USS West Point.

In between, Niedzialek chronicled the day-to-day monotony of war: the scrubbed missions; endless games of pinochle; hungry kids begging the GIs for handouts outside their base in Italy; and K rations, the boxed meals for the boots on the ground.

"He was born pretty happy, I think, and he wasn't traumatized at all by his experiences in the war," Teresa Niedzialek said. "It's almost as if he was having the time of his life, like it was just some great adventure."

The son of Polish immigrants, Niedzialek received a draft notice from Uncle Sam after working a few years out of high school for the defense manufacturer Sperry Corp. His older brother, Benjamin, also served in World War II — as a sailor in the Pacific.

Niedzialek delighted in jotting down the smallest of details in his diary — passing the Rock of Gibraltar and seeing Mount Vesuvius, for example — and decades later recounting his adventures in a YouTube video created by the Half Hollow Hills Community Library, as part of a nationwide veterans project at the Library of Congress.

Other entries reflect the weight of the war: the German Luftwaffe bombing the bases at Foggia, which consisted of a series of airfields home to B-17 and B-24 bomber crews as well as a handful of fighter squadrons, including the famed African-American Tuskegee Airmen. Those entries also chronicle Niedzialek's disappointment at having four missions canceled, including a practice flight and a bombing run over marshaling yards at Vienna.

"If this keeps up," he wrote, "I'll have more stand-downs than missions."

'IT'S THE BORDER OR NOTHING'

Then, Nov. 16 dawned. Niedzialek boarded the The Lady Patricia as a replacement. The B-24 headed for Munich with a group of other bombers.

It wasn't long, though, before things went wrong. The No. 3 engine had an oil pressure problem. Then, somewhere near Munich, the B-24 took hits from anti-aircraft fire — flak — and the No. 2 engine died.

"Went over target tail end because of #3 prop, it was throwing oil. It couldn't be feathered and only choice was to head for Switzerland," Niedzialek wrote. "All loose equipment thrown out to gain altitude. Hit light but accurate flak. Hydraulic system was shot out and # 2 engine had a hole in it. Short time later sweated out five unknown fighters [enemy planes]."

Soon, over the Swiss Alps, came the order to bail out.

"I hit the silk first," Niedzialek wrote, describing the parachute jump from 15,000 feet as the biggest adventure of his life.

He ended up in a hotel-turned-internment camp in neutral Switzerland, though Swiss guards still had orders to shoot any prisoner of war who tried to escape.

"It's a year around resort," he wrote. "Just the same I'm looking for chances of getting out of here."

Niedzialek passed the hours by playing card games and listening to the radio, including the Army-Navy football game.

A little more than three weeks later, on the morning of Dec. 9, 1944, he and five other American POWs escaped with the help of Polish-speaking guards.

"Now it's the border or nothing," he wrote. "Sure sweated out the trip. Where's that luck of mine?"

Niedzialek wrote that he couldn't detail the escape: "Sorry, diary. I can't give you all the dope, just so much and that's all."

But, on Dec. 13, Niedzialek wrote that he had reached France, noting: "Had a little hardship, but I'll go through it again if I had to. Sorry, but I won't be able to tell the set up we had in this country. Still secret information."

Because Niedzialek escaped and could be in danger of being recaptured, the Army Air Forces had him finish his service stateside.

For his bravery, Niedzialek was awarded three Bronze Stars and an Air Medal.

Survivors of other major conflicts, nationwide:

Statistics are from the U.S. Department of Veterans Affairs as of Sept. 30, 2019.

The last living soldiers of our nation’s wars, according to the U.S. Department of Veterans Affairs:

NYC switching from J&J to Moderna for at-home vaccinations
1:21
LIer makes mask chains, feeds the hungry from 9/11 until now
Report: MTA spent $1.1 billion in overtime pay in 2020
1:16
'Relief, but not a celebration': LIers respond to Chauvin guilty verdict
Top photos from around LI from April 2021
See photos from the scene of the Stop & Shop shooting
Didn’t find what you were looking for?