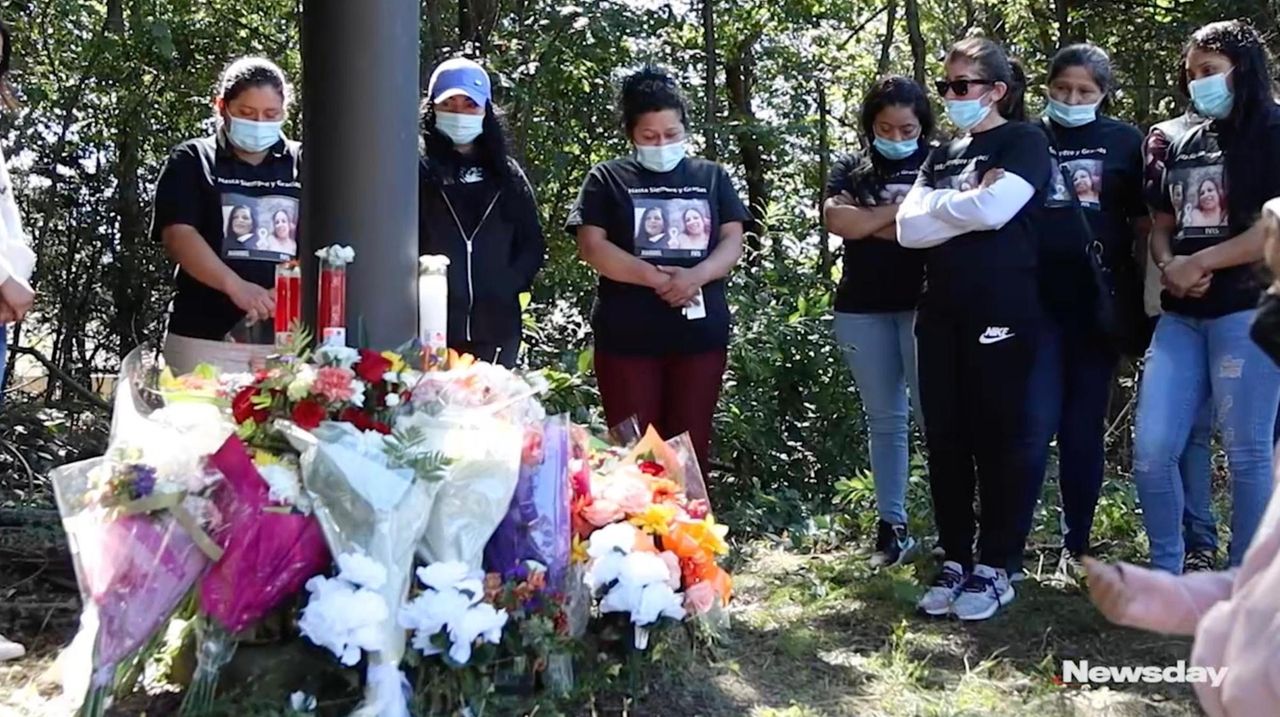 Family and friends gathered Saturday to leave flowers and hold a prayer vigil near the scene of Tuesday's fatal accident on the Southern State Parkway in North Massapequa. Credit: Howard Schnapp

Mourners gathered for a vigil Saturday near the scene of a wrong-way crash on the Southern State Parkway earlier in the week that killed four people and injured two others.

Family and friends, many in dark T-shirts remembering the victims, left flowers and said prayers near the North Massapequa crash site as traffic rolled past nearby.

The fiery crash happened about 5:10 a.m. Tuesday, police said, when a 1998 Toyota Camry going the wrong way on the eastbound parkway hit a 2011 Nissan Rogue head-on between Exit 29 and Exit 30. The driver of the Camry, Marvin Balcaseres, 33, of Farmingdale, died, as did three others in the Rogue, identified by police as driver Ruben Sanchez-Flores, 67, his daughter Ivis Sanchez-Cordova, 34, and passenger Edith Magana, 56, all of Hempstead.

Nadia Sanchez-Cordova, 44, who is Ruben’s other daughter, survived, police said.

Relatives told Newsday that Ruben Sanchez-Flores was driving his daughters and their co-worker to their factory job when the collision happened.

A GoFundMe page was created Wednesday to help the Hempstead family with funeral-related expenses.

On the page, family matriarch Nidia Cordova de Sanchez explains the family’s difficult circumstances and said they would like to send the bodies of those killed to Honduras "since this was always my husband's desire to return to our native country."

The Southern State has long been one of Nassau County’s deadliest parkways. In 2012, a Newsday report called it the deadliest in the county.

Family of Southern State crash survivor: It's a 'miracle' she survivedAs police continue to investigate the wrong-way collision that killed four people on the Southern State Parkway Tuesday, the uncle of one survivor says she has sustained major organ damage. Family 'destroyed' by death of dad, daughter killed in head-on crashThe family gathered at the driver's Hempstead apartment to mourn the loss of Ruben Sanchez-Flores, his daughter and a family friend, all killed in wrong-way crash on the Southern State Parkway. 4 killed, 2 hurt in wrong-way crash on Southern State, police sayCallers to 911 had tried to warn law enforcement about the wrong-way vehicle, but the crash occurred before troopers could intervene, police said.  Site of crash no stranger to fatal collisionsThe 10-mile stretch of roadway, nicknamed "Blood Alley," has been the scene of several deadly crashes over the years.