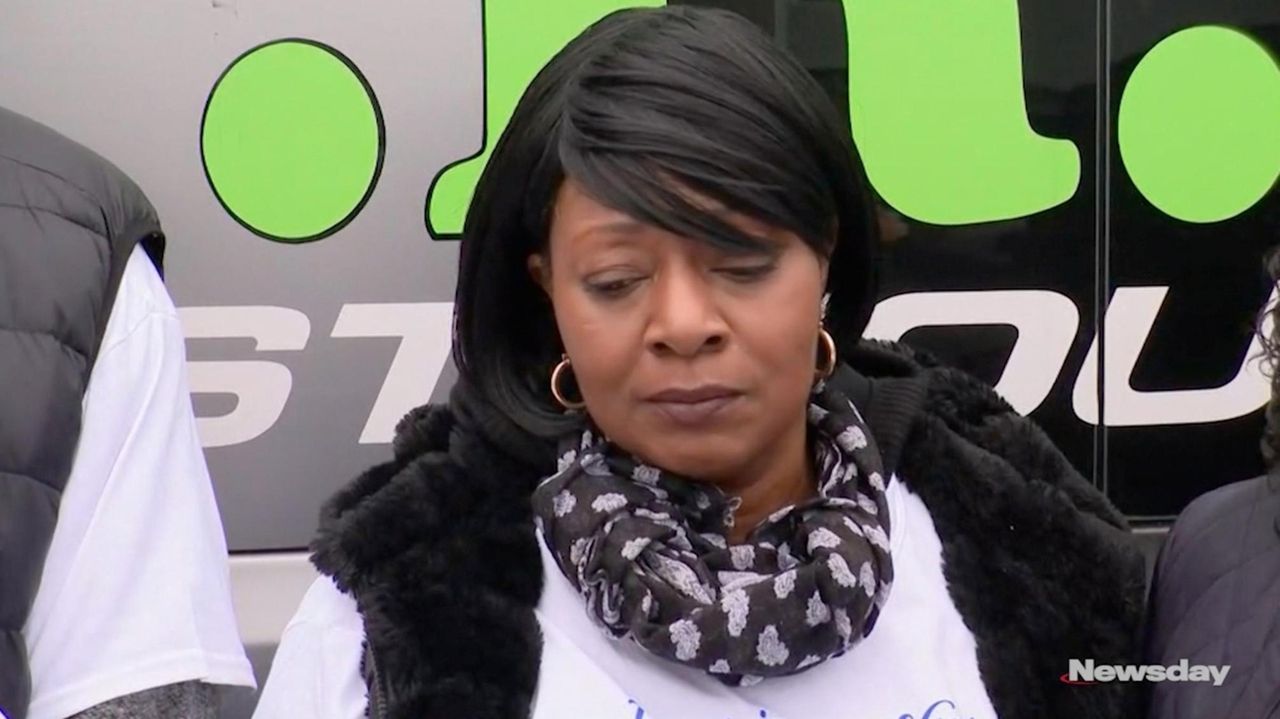 Five months after 24-year-old Terrance Brown was gunned down while sitting in a car in Uniondale, the crime is unsolved and the perpetrator remains at-large. On Friday, Terrance's mother, Susan Brown, spoke at a vigil at the site of the murder asking for the person responsible to come forward.    Credit: News 12 Long Island

Susan Brown of Uniondale prays that the man who gunned down her son, Terrance, can't sleep at night; that he's haunted by a senseless murder and the victims left behind to carry the grief.

"You won't rest until you come forth," Brown said Friday at the Uniondale street corner where her 24-year-old son was shot five months ago. "I know it's weighing on you. Be a man and accept the consequences."

On Friday evening, community groups, religious leaders and anti-violence activists held a vigil at the site of the shooting to draw attention to Brown's killing, and to gun violence in the so-called corridor communities of Hempstead, Roosevelt, Westbury, Uniondale and Freeport.

More than 80 people came out to the ceremony at the intersection of Bira Street and Jerusalem Avenue. There were speakers, songs and the lighting of candles.

Before the 90-minute ceremony, James Brown, 56, of Uniondale said life hasn’t been the same without his son.

“It’s been a tough task trying to live without him,” the father said. “I’m just taking it one day at a time.”

Even though the person who murdered his son hasn’t been captured, he said he still believes in the justice system.

“The process can take longer than anticipated.”

Uniondale community activist Valerie McFadden spoke and informed the crowd that there have been multiple unsolved mysteries since 2006.

“No one has the right to cause this  kind of pain,” she said.

"We are putting out a call to action for the entire Long Island community," said Zatar. "Our kids deserve an opportunity to have children and grandchildren."

Nassau police said Brown and an unidentified man, also 24, were struck by gunfire on Dec. 12, 2018, as they sat in a vehicle near the intersection where Friday night's vigil was held. Brown died two days later from his injuries, while the other victim survived.

McFadden believes there are members of the community who know the identity of the killer but won't come forward for fear of being labeled a "snitch" in the neighborhood.

"This is a human life that was stolen," McFadden said, urging the community to cooperate with law enforcement.

Mayalsia Jackson, 24, of Elmont said Terrance Brown was her friend. The two met through a mutual friend years ago.

“The last four months have been rough,” she said. “Some days I wish I could have him back.”

The corridor communities are no stranger to violence.

In December 2007, Kareem Sapp, 19, an aspiring auto mechanic, was fatally shot on a Uniondale street as he offered a young woman a ride. Grady Hampton of Uniondale was convicted of second-degree murder and received a 20-years-to-life sentence for Sapp's killing. Police said Sapp previously had an affair with Hampton's girlfriend.

"The community has been in the midst of hell for a long time," said Kareem's father, Thomas Sapp, 52, of Hempstead Village.

“This is my community. In order for the streets to be safe, we need to show up,” Sapp said. “I want to be a part of the solution. We have to really show that we’re concerned citizens.”

Stephanie Drain, whose son, Andre Graydon, was gunned down on New Year’s Day in front of a Hempstead bar, added "you can move on but you can never let go."

Charles Smith of Hempstead, pleaded guilty in 2017 to the shooting and was sentenced to 18 years in prison.

Brown said her son — who she described as a "good person" who loved basketball and spending time with his friends and family — deserves justice as well. "The community cannot let this continue," she said.

Danny Baez, one of the organizers with STRONG, reiterated Brown's point.

“The person who committed this act still hasn’t been apprehended, and the family is here seeking justice and stirring up the environment so somebody can speak up about what happened,” he said.

Nassau police urged anyone with information about Brown's murder to contact Crime Stoppers at 800-244-TIPS.

Man dies after shooting, Nassau police sayOne of the two men shot in Uniondale on Wednesday has died of his injuries, ... Crime in Nassau and Suffolk, 2006-2017 There were 35,503 violent or property crimes recorded on Long Island in 2017 by the state's Division of Criminal Justice Statistics, a 5.7 percent decrease from 2016. 5 ways to send story tips to Newsday Do you have information that might lead Newsday to an important story, or an investigation? A document that starts us on the trail? Here are five ways for you to send our journalists tips, documents and data with a range of security options.