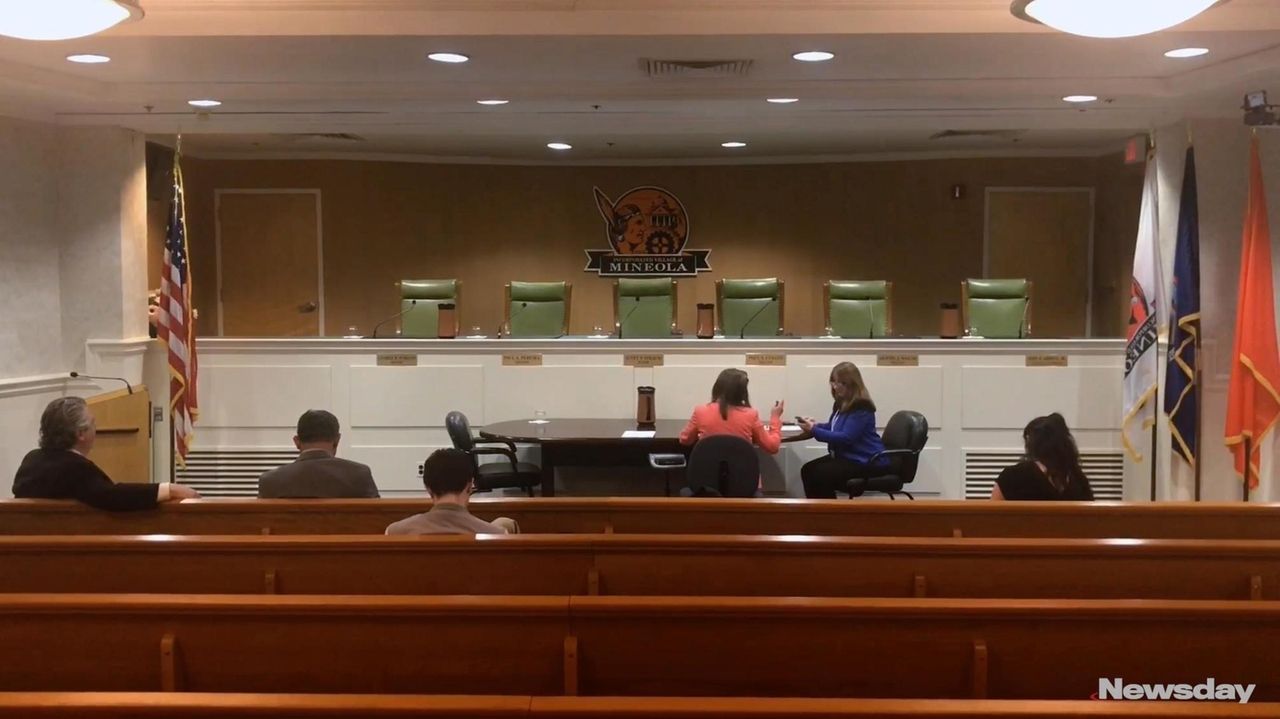 On Monday, Mineola Mayor Scott Strauss discussed the village budget that was passed by trustees last week, which features a 0% tax increases for residents for the third year in a row. The $26.14 million budget represents a 2.8 percent increase in spending over the 2017-18 budget, while maintaining property taxes at present rates. Credit: Newsday / Khristopher J. Brooks

Villages across the Town of North Hempstead finalized their 2018-19 budgets last week with four passing spending plans that feature no property tax increases.

Roads and trees are key priorities for the village, with $375,000 planned for road investments and $30,000 dedicated for planting trees. The Munsey Park budget also includes $25,000 for the revitalization of parks and grounds. The village plans on nearly doubling revenue collected from tree permits, from $2,500 to $4,500.

Great Neck’s 2018-19 budget of $9.67 million represents a 1.2 percent decrease from the previous year’s spending. General government support, such as administrative staff and public safety, represent more than 20 percent of the budget. The parking violations department will see a 72 percent funding increase, from $125,850 to $215,250, including $35,000 marked for new equipment. About 13 percent of the annual budget — $1.26 million — will be used to pay off debt service.

The Great Neck budget also includes capital projects in a three year plan; investments for next year include $520,000 for road resurfacing and improving sidewalks.

Kings Point’s $17.33 million budget marks nearly a 3 percent increase from last year’s budget of $16.83 million. Public Safety, with a budget of $7.34 million, comprises about 42 percent of the total village budget. The police department alone has a $5.33 million for the coming year. Debt service accounts for the second highest spending percentage of the Kings Point budget, with $2.26 million in payments for capital projects.

Trustees in Mineola passed a $26.14 million budget last week that represents a 2.8 percent increase in spending compared to the 2017-18 budget.

Mineola’s budget calls for spending $20.7 million in the general fund, $2.4 million in the water fund, $2.1 million in the library fund and $774,953 in the swimming pool fund. Village officials project Mineola will get an extra $30,000 in revenue this fiscal year from plumbing and electrical permits, as well as an extra $65,000 in building permits and an extra $5,000 in business licenses.

“This zero [tax increase] is with no gimmicks, no bells and whistles,” said Paul Pereira, deputy mayor. “We’re not raising fees and services or nickel-and-diming people.”

New Hyde Park earlier this month passed $6.43 million budget that raised property taxes by 1.65 percent. The increase, which Mayor Lawrence Montreuil called “modest,” will generate an extra $96,744 in revenue for the village and will mean an extra $19.44 next year on the average homeowner’s tax bill.

In Floral Park, trustees presented a $29.88 million budget that raises property taxes by 2.93 percent. For the average homeowner, the increase means an extra $118.97 in their annual tax bill. Trustees plan to vote on the proposed budget May 1.

“One cost in particular that continues to rise is health care costs for our employees who provide the services,” he said. “The predictions for next fiscal year is that these costs will rise another 8 percent.”