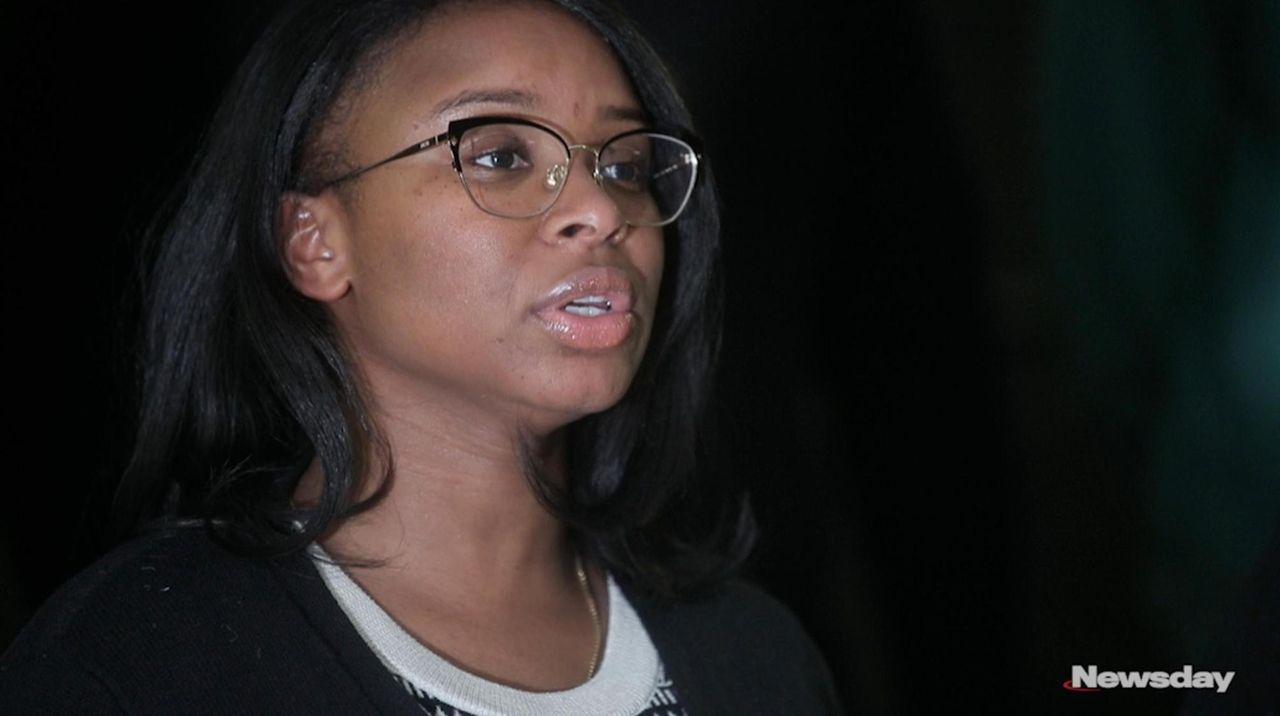 Executive director of Voices of Virtue Inc., Rachel Blackburn explains the choir's importance to the community through music and shaping the lives of its members.  Credit: Newsday / Raychel Brightman

Fifteen voices at the Voices of Virtue choir rehearsal soar together in harmony and counterpoint, reflecting long familiarity with weaving sounds into a whole that's greater than its parts.

Director Rachel Blackburn sounds a note on the rehearsal piano in the Hempstead High School choir room, sings a few notes and counts off the beat as the singers join in.

"Let's do that again. You sound like three sopranos. I need you to sound like one," says Blackburn, 41, of Baldwin Harbor, nodding to the sopranos. "Everybody close your eyes and just listen. Listen."

Voices of Virtue consists largely of Hempstead High School graduates who want to continue singing after graduation. Blackburn founded the alumni group in 2010, and it's now expanding its horizons — membership after an audition is open to singers who can make the commitment for weekly practices, pay $15 per month membership dues that help cover the cost of vocal lessons, and attend concerts.

To celebrate Black History Month, Voices of Virtue will perform a mix of contemporary, gospel and sacred songs at an NAACP event on Monday at Kennedy Memorial Park in Hempstead.

The group is moving its rehearsals from the choir room at Hempstead High School, where Blackburn is choral music director, to the Salvation Army community center on Atlantic Avenue in Hempstead, where they will become the artists in residence. Blackburn expects the choir, which ranges in size from 15 to 25 depending on singers' schedules, will benefit from the center's existing music program while choir members will serve as role models for younger singers.

The idea of reaching more community members appeals to her, along with continuing to expose grads to resources and training they can use in their careers. Blackburn incorporated VOV as a nonprofit to support its Voices of Virtue Music Institute instruction programs and to help finance trips. "If they can see what's out there, they'll work harder to put themselves out there," she says.

Seniors in the high school choir are eligible to join, if they're singing at a certain level and can make the commitment.

"They get to have the experience of singing with more seasoned voices," Blackburn says, "and the older singers offer a support system and help them when they get here."

The bonds of hard work

There's a lot going on during weekly rehearsals, including laughter and friendly teasing. From reviewing the correct phrasing and enunciation for a new part to suggestions on how to listen closely to a recap of the history of folk songs and spirituals and the black composers who recorded the old songs, Blackburn imparts life lessons along with musical knowledge.

As high school students, members were able to travel internationally to perform in Prague, Czechoslovakia; Verona, Italy; and Vienna, Austria. As alums, they've visited and sung in Atlanta, Salt Lake City and New Orleans. In 2014 they did a bus tour over winter break with stops in Philadelphia, Washington, D.C., and Warren, Ohio, where Blackburn grew up.

"I think that's why their support is so unwavering," Blackburn says. "They've had such experiences, good and bad, got to travel internationally, and learned a lot. It overwhelms you when you think about it, to think this means so much to them."

After the group had earlier won a gold medal at a 2009 choral festival in Verona, Italy, the students were disappointed at not winning the gold award for their mixed ensemble performance abroad in Prague in 2011 despite having the highest score. Blackburn said the experience served as a life lesson on biases and subjectivity in the arts.

"Sometimes you give something your all, and life isn't fair," Blackburn says. Although upset that the judges did not award a gold medal that year, they have shown resiliency and “how passion and desire keeps you going,” Blackburn says.

Many in the group learn songs by ear, so singers’ phones are often recording during rehearsals so they can later listen, share and practice their parts at home. During summer institutes, there are classes teaching sight reading along with vocal and instrumental instruction.

The group's repertoire extends "from Bach to rock," as they say. Voices of Virtue performed in 2014 at Molloy College along with a rock band composed of military veterans, singing at a fundraising concert to earn money for veterans' programs, and they've sung at area churches and events. Rehearsal numbers included the contemporary songs "Clap Your Hands" and "In the Beginning Was the Word," the American folk song "Walking on the Green Grass," with its complex harmonies and rhythms, and Felix Mendelssohn's "Elijah."

Two upcoming concerts will celebrate African-American composers and arrangers, so as they rehearse, Blackburn often shares the history behind the spirituals, folk songs and gospel music they're singing.

"We want to preserve the songs you don't get to hear very often anymore," she says. "Our goal is not to sing a bunch of songs people already know. We're not educating them if we do that. And you're stretching, you're growing."

Black composers often wrote down the music for spirituals, Blackburn explains, because many weren't accepted in the classical world so they built upon and transcribed black music traditions. "We can stand on their shoulders," she says. "It's more than a song."

People worried that the compositions of classically trained black composers such as Margaret Bonds and Florence Price, whose works preceded gospel, would fade when gospel came on the scene, but their compositions are still sung, she says. "And [composer] Hall Johnson would be so pleased to know his arrangements are still being performed."

Two of Johnson's works, "Every Time I Feel the Spirit" and "I've Been 'Buked," are on the New York State School Music Association's performance list, she notes.

The group's easy camaraderie pops up throughout rehearsal. Along with their love of music, that feeling of family keeps many of the singers coming back.

"It's been one of the better choices I've made as far as sticking with it," says Vladimir Dugue, 32, a career musician who sings bass and graduated in 2004. He serves as assistant director for VOV and handles music duties at two churches in Queens while studying music at Nassau Community College. He expects to graduate in December, then go on to finish his bachelor's degree in music.

The choir has become one of his priorities, Dugue says. "We definitely do have a large, deep connection with each other. Not only do we have to work hard to get what we want, we have to stick together. We're a family."

"I like the fact that everyone in the choir is close," says Woods, 24, a medical receptionist. "We can lean on each other, and help each other."

Woods enjoys learning new repertoire, listening to Blackburn's voice notes and repeating her part until it's locked in. "It's important that we know our parts, that we don't hide behind other voices," she says.

Jeremiah, 30, lives in Freeport and works in marketing research and analytics at Altice. "I love the music and the passion Rachel has behind it," she says. "Everything we do becomes a lesson. We're growing and learning to think about what you're doing. And we're learning how to bring it into other parts of our lives."

The group's travels have opened her to a sense of adventure.

"I don't think I would have been so comfortable without this experience," she says, noting she took two semesters abroad during her time at Trinity College in Connecticut and that she went away to graduate school at Rutgers, where she earned her MBA. "You learn the rest of the world is ready for you to explore. I'm the type of person who was afraid to join a dance class. I think music gives you a language you can communicate with all around the world."

The choir's also a priority for Dominique Miller, 32, is a social worker at EmblemHealth Neighborhood Care in Queens. "It's my extended family," she says. Along with the institute’s lessons, “VOV is a positive addition to the community."

Capt. Charles Roberts, the Salvation Army's Nassau County coordinator and Hempstead administrator, said the VOV choir complements its existing music program. It offers music lessons for children ages 9 through teens in brass instruments, piano, percussion and vocals, he said, along with the Timbrels, a rhythmic movement program performed with tambourines.

"All these soft skills really help kids to excel," Roberts says. "We're excited to team with VOV. I want our youngsters to see these young adults in action so they have role models. They'll learn so much from watching them."

CORRECTION: An earlier version of this story incorrectly stated that Margaret Bonds and Florence Price had transcribed gospel music.

Voices of Virtue's weekly rehearsals are held at The Salvation Army Citadel's community center, 65 Atlantic Ave., Hempstead. For information or to arrange an audition, email vovapps@gmail.com. Performance and musical instruction information also is available on the group's Facebook page, facebook.com/Vovapps and on its website, voicesofvirtueinc.org.

The group is scheduled to perform at two upcoming events.

• Monday, Feb. 25, 7 p.m., at Kennedy Memorial Park, 335 Greenwich St., Hempstead. The Hempstead Chapter of the NAACP is sponsoring a program that includes a performance by Voices of Virtue.

• Sunday, March 10, 4 p.m., in a full-length concert titled “Our Heritage, Our Music” at the First Presbyterian Church of Babylon, 79 E. Main St., Babylon. Members will perform songs that celebrate choral music and African-American composers and arrangers. A freewill offering will be taken, with proceeds going to provide free music lessons to Hempstead students.