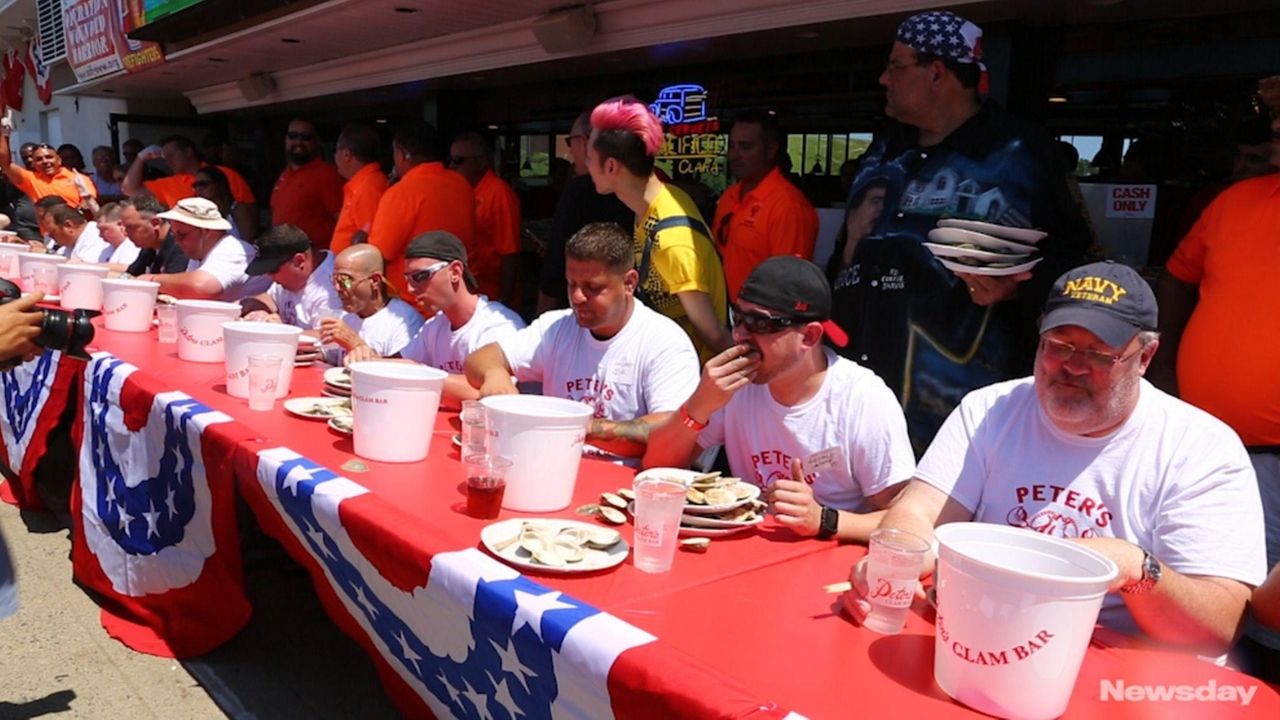 More than a dozen Nassau County firefighters tried to outdo their opponents at the fourth annual clam-eating contest at Peter’s Clam Bar in Island Park, consuming more than 600 clams in six minutes as supporters chanted “come on!” and “swallow it!”

“We’re neighboring departments. We help each other in times of need,” said Helicher, 46, a programmer with Best Buy.

The prize money was provided by the clam bar; the proceeds donated to the charities came from donations from the public and registration fees for the contest.

Butch Yamali, president of the Dover Group in Freeport, which owns the clam bar, said the event raised a record $12,000 for the Nassau County Firefighters Operation Wounded Warrior, a nonprofit that provides goods to wounded armed service members.

The contest was created in 2014 to raise money for firehouses damaged in superstorm Sandy, but organizers decided this year to donate the proceeds to a charity.

“The important thing about Island Park is how resilient we are,” said Yamali, who was raised in the village. “Now that we’re OK, we want to take care of other communities.”

Fries and Helicher said they donated $500 of their earnings to the Nassau County Firefighters Operation Wounded Warrior.

Fries ate 107 clams over two rounds totaling six minutes, and Helicher consumed 99. But they tied because they ate the same amount of clams in the two-minute final round.

The winners said they followed the technique of competitive eater Takeru Kobayashi, who has won the Nathan’s July Fourth Hot Dog Eating contest six times and gave a demonstration before the event with eating champion Ed “Cookie” Jarvis.

“I saw people using a fork,” said Fries, 45, a maintenance worker at Sewanhaka High School in Floral Park. “Why use a fork? Get out of here.”

Helicher, who was awarded the Gold Medal of Valor by the Nassau Fire Commission in 2010 after rescuing his next-door neighbor from a fire, said he just focused on eating.

“You get it down and you want to keep it down,” he said.

Fries’ mother, Helen Fries, said she was “elated” by his win, noting that her son was born with a cleft palate and was in special-education classes growing up.

“He really and truly puts out a lot for everybody, for his community, and he’s so caring,” said his mother, an EMT with the Elmont Fire Department. “He really deserves it.”