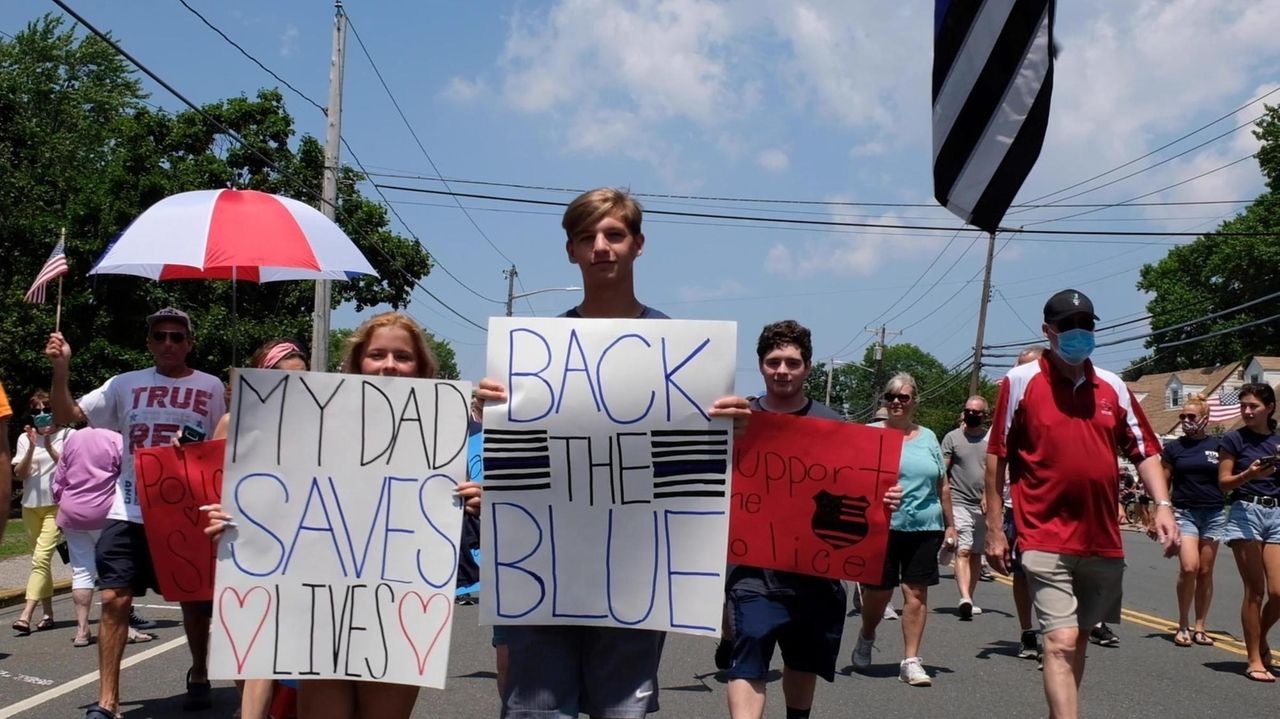 More than a thousand people marched down Wantagh Avenue despite sweltering heat Sunday afternoon to show support for law enforcement in defiance of recent nationwide demonstrations against police brutality and racism.

In interviews, participants said they felt Black Lives Matter protesters do not acknowledge the positive things police do, such as administering Narcan to prevent drug overdoses and pulling injured people from wrecked cars.

Derkevics waved a Blue Lives Matter flag and wore a hat advertising the National Rifle Association. He said his daughter is a Suffolk County police officer.

“It’s a shame that she’s not getting backup,” he said.

Derkevics and other marchers condemned the police killing of George Floyd, an unarmed Black man, in Minneapolis in May, which sparked mass protests over police brutality. But many dismissed the idea that racism is a widespread problem in American policing — a central contention of Black Lives Matter demonstrators.

“I’m not saying there aren’t some cops that aren’t good,” said Lainie Fitzgerald, 65, of Garden City. “But a couple of bad ones doesn’t mean they’re all bad.”

Fitzgerald said her husband was a retired police officer.

Barbara Kegel, 73, of North Wantagh, said she’d never been to a political demonstration before Sunday.

“The disrespect for the police department — I’ve never experienced anything like this in my life,” she said.

She described the protests against police brutality as “a disgrace.”

King, who is African American, was among the only people of color to join the march on Sunday. King, 39, of Wantagh, said there is pressure in the African American community to support the Black Lives Matter movement.

“If you don’t, you’re not Black,” he said, characterizing the attitude of others.

A small group of counterprotesters lined Wantagh Avenue, including Gabrielle Leparik. She said marchers cursed at them and one threw a water bottle in their direction.

“To come out here with such aggression and anger, it’s just sad,” said Leparik, 26. She lives in Washington, D.C., but grew up in Huntington. As she spoke, a man drove by and shouted “[expletive] losers” at them.

Leparik called for more dialogue between the two sides, as did Derkevics.

“It’s really a shame that we cannot listen to opposing points of view,” Derkevics said.