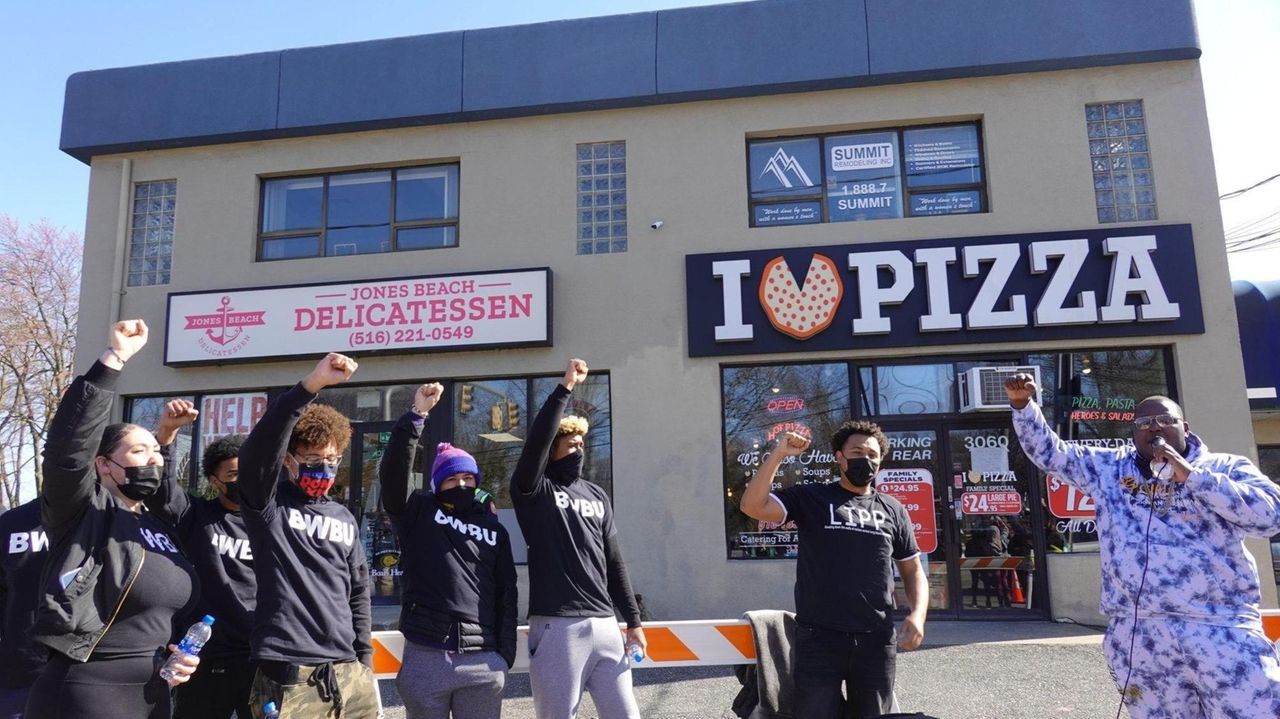 Dozens of protesters and about two dozen counterprotesters gathered outside of “I Love Pizza” on Merrick Road on Saturday, after a delivery driver there allegedly used a racist slur against a Black customer and was fired.  Credit: Debbie Egan-Chin

The sidewalk in front of a Wantagh pizza restaurant became a place for fiery debate Saturday after a delivery driver there allegedly used a racist slur against a Black customer and was fired.

Dozens who turned out to protest at I Love Pizza on Merrick Road and draw attention to the accusation, were met by about two dozen counterprotesters. The opposing sides shouted face-to-face until separated by Nassau police officers positioned in front of the business and across the street.

More than 50 police officers surrounded the area, cordoned off the business and recorded the confrontations on video. A few of the officers watched on horseback. Police said there were no arrests.

The rally, organized by Terrel Tuosto, a West Hempstead resident and co-founder of Long Island Peaceful Protest, was sparked by a Black Massapequa women's allegation that a delivery driver for the restaurant sent her a text message containing a racial slur after she told him he wouldn't get a tip because he took too long.

Lashae Jerry, 25, said the pizza she ordered last weekend was two hours late. She exchanged text messages with the driver, who allegedly responded with a racial slur and told her to get out of Wantagh.

"He said, ‘Black Lives Matter, but yours doesn’t,’ " she said Saturday at the protest. "I felt hurt. This is crazy. The world shouldn’t be separate from white and Black and there shouldn’t be a line to cross in towns."

Jerry said the manager initially denied her allegation, but after reviewing the messages, said he would address it. Jerry returned to the restaurant and found the driver working behind the counter, leading to a confrontation where she said the store manager called the police.

The manager later said the driver was fired. Police said Saturday they were investigating the incident.

An employee who answered the phone at the restaurant Saturday declined to comment. Employees were still taking orders at the rear entrance during the rally, while both sides, and cops trying to keep things peaceful, blocked the front entrance.

The counter protesters, including some from the group, Long Island Loud Majority, said they were supporting the business. Police eventually ordered the group to leave the storefront area and move to a median across the street.

"The man who owns this establishment tries to do the right thing. He apologized and was sympathetic to the situation," said counterprotester Joseph Piccione, a member of Long Island Loud Majority, which on its Instagram page says the group's aim is to "energize conservatives from coast-to-coast."

"They’re trying to ruin his own business," said Piccione, adding that he came out to support the restaurant's constitutional rights.

Tuosto said texting or uttering a racist slur should be treated like a hate crime. The counterprotesters should be defending Jerry instead of the business, Tuosto said.

He noted Wantagh’s demographics, which show the population more than 90% white compared to less than 1% Black, as a sign of what he described as segregation on Long Island. He urged a boycott of the business and others unless they treat all customers fairly and undergo racial sensitivity training.

"This was an egregious act of racism and a detestable hate crime took place," Tuosto said. "When we talk about Black Lives Matter, if it really mattered she would’ve been tended to and justice would’ve been served and they would have said this restaurant doesn’t stand for that."

Delivery driver's alleged slur prompts cop probe, rallyNassau police say they are investigating after a pizza delivery driver allegedly used a racial epithet directed at a Black Massapequa woman who refused to tip him because the order took about two hours.