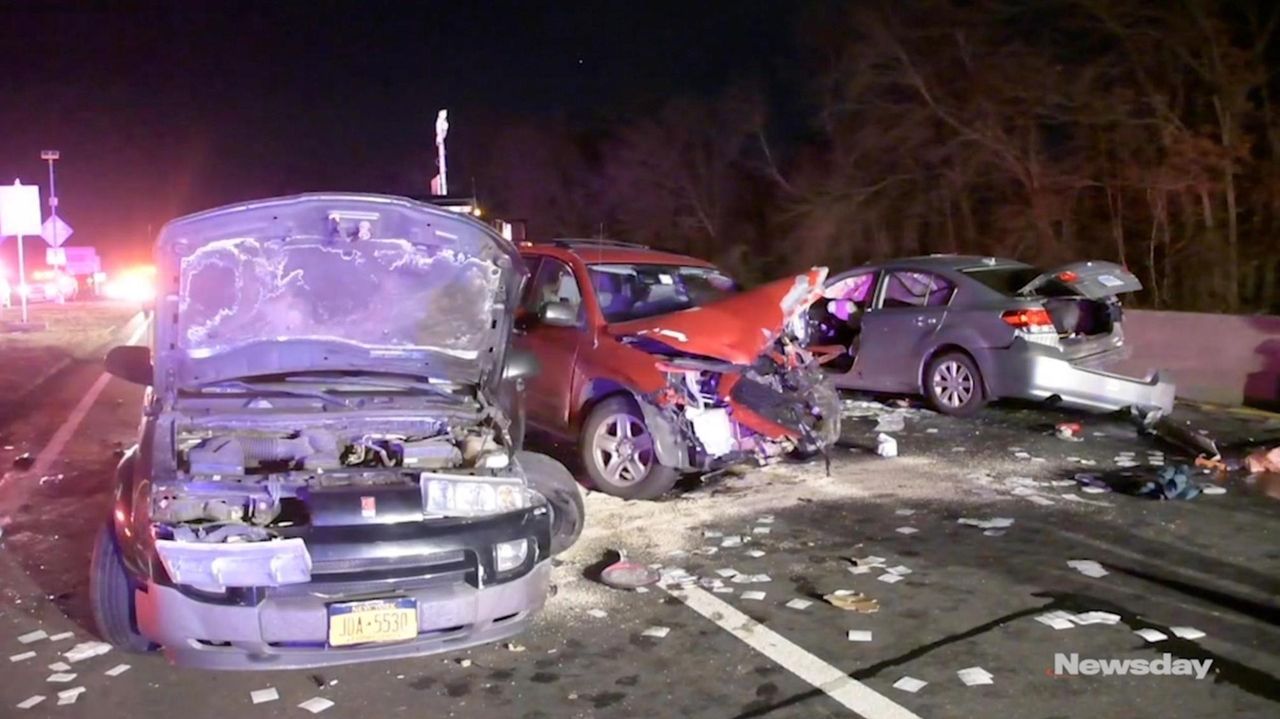 A wrong-way driver who caused a three-vehicle crash on the Wantagh State Parkway, injuring himself and three others on Tuesday, has dementia and had been reported missing in Connecticut, State Police said Wednesday morning. Credit: Paul Mazza

A wrong-way driver with dementia caused a three-vehicle crash on the Wantagh State Parkway just an hour after he had been reported missing in Connecticut, authorities said Wednesday.

Burgess E. Moore, 82, and three others were rushed to the hospital Tuesday after his northbound Subaru Legacy smashed head-on into a southbound Toyota RAV4 about 10:20 p.m. in Wantagh, just south of Sunrise Highway, State Police said. The driver of a third vehicle, a Saturn Vue, could not avoid hitting the back of the Toyota, police said.

Moore of New Britain had been the focus of an intensive search Tuesday night after his 74-year-old wife discovered he was missing about 9:25 p.m. and called police, which issued a Silver Alert.

“She was in another room and when she went to look for him, he was gone,” New Britain Police Chief James P. Wardwell said. “She called us right away . . . and we started a search of the area. We were going to all his familiar places.”

Moore was in critical condition at Nassau University Medical Center in East Meadow with facial injuries and a broken hip, police said. His family could not be reached Wednesday.

The Toyota driver, Richard Hurwitz, 48, of Long Beach, was taken to NUMC with neck and back pain, police said. The Saturn’s driver, Vincent Diaz, 20, of Levittown, and passenger Dennis Riley, 20, of Levittown, were treated for minor injuries at the hospital.

Diaz said he saw an explosion of sparks as the first two vehicles crashed.

“I slammed on my brakes when I saw it and swerved my car as much as I could to the right, but I couldn’t avoid the accident,” he said.

As he recovered from various pains at home Wednesday, he said he believes his grandfather, who died Dec. 27, was watching over him and he feels bad for the wrong-way driver: “He never really knew what he was doing.”

The crash shut down the southbound parkway for about four hours, officials said. Details of how and where Moore got onto the southbound lanes were not available Wednesday.

Wardwell said his officers were searching for Moore at his favorite places — a local park, certain stores and the YMCA — when New York State Police called.

“As soon as the family realized he was gone, they reported it,” he said. “It’s a tragedy all the way around.”