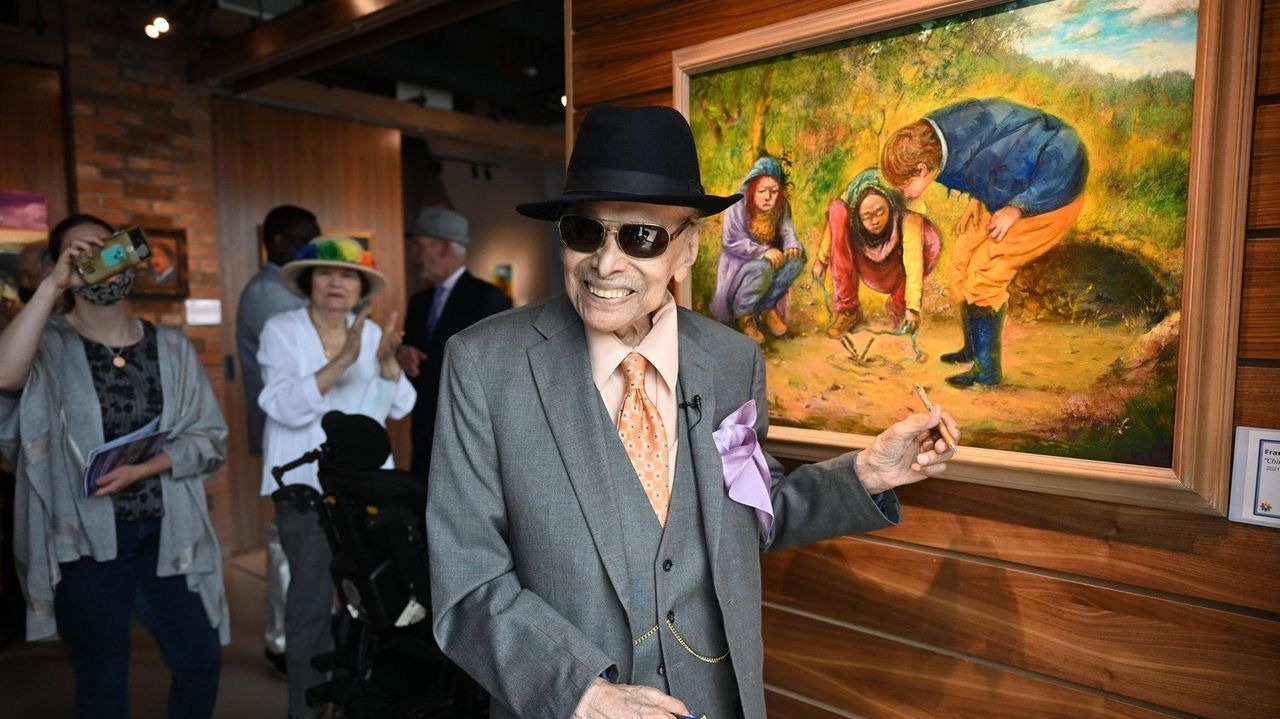 When the Twin Towers came down and Francisco Poblet was severely injured in the ensuing mayhem, the renowned artist — and last living apprentice of master surrealist Salvador Dalí — began painting the horrors that surrounded him.

Years later, when the coastal waters surged and Superstorm Sandy washed over his city, destroying his Howard Beach studio and 18 of his paintings, Poblet again put brush to canvass to recreate the images circulating through his mind.

And when the COVID-19 pandemic tore through New York last year, sickening Poblet and claiming tens of thousands of lives, Poblet did what he's done his entire life.

He painted the devastation that had engulfed his world.

"It's all I have. It's me," said Poblet, who will be the featured artist Saturday as Westbury Arts formally debuts its new $2 million arts center. "I want to leave a legacy. I want people to remember this time and this era and the way I presented it. My paintings are telling you something about our times."

Poblet, 88, of Manhattan, will debut his latest work, depicting the coronavirus pandemic, as well as other pieces from his collection dating to the 1960s, as Westbury Arts opens the Schenck Avenue studio.

"We hope to be a community hub for arts and culture," said Westbury Arts director Julie Lyon. "Our mission is to create programs that connect, educate and inspire our community. With a vision of a community where arts and culture instill a sense of belonging and pride."

Poblet, who was born in New York City, has been painting since he was a child. When he was 14, Poblet's father introduced him to Dalí, a friend and an acclaimed Spanish artist. So impressed by the boy's burgeoning talents, Dalí agreed to be Francisco's private mentor, starting with oils, then moving to acrylic, pen and ink.

"He was a teacher and my friend," recalled Poblet, who has adopted Dalí's signature style of surrealism. "He used to put me to bed with chocolate and cake."

On Sept. 11, 2001, Poblet was living two blocks from the World Trade Center. When the plane struck the north tower, it shattered the windows of Poblet's apartment. Poblet went onto the street with his video camera but was struck by debris from the crumbling buildings, severely lacerating his neck and injuring his throat, lungs and stomach.

While hospitalized and bedridden, Poblet began painting — his vivid memories from the nation's darkest day serving as inspiration for his 9/11 collection of paintings.

"I live in a different reality," Poblet explained. "A reality of the subconscious where I see reality. It exists as images in my brain."

In recent years, Poblet said he's been drawn to real-world events — the devastation of Hurricane Katrina, the desolation and heartache of Sandy and the shared isolation and human tragedy of the COVID pandemic.

"I want everyone to remember what it was like," he said. "Tragedy is easier to convey and it's much more animated than most paintings would be. … It's the things that happen that make you want to go on."

"You look at his paintings and you can feel what he was feeling," she said. "What people can take away from his work is that they are beautiful and they are emotional and they will stir your soul."

While Poblet does not shy away from his lineage with Dalí, one of the greatest masters of art from the 20th century, he wants to be remembered on his own.

"He was Dali but I am here today," Poblet said. "I want people to remember my paintings for what they are and who I am."

Poblet's work will remain on display in Westbury through June 26.