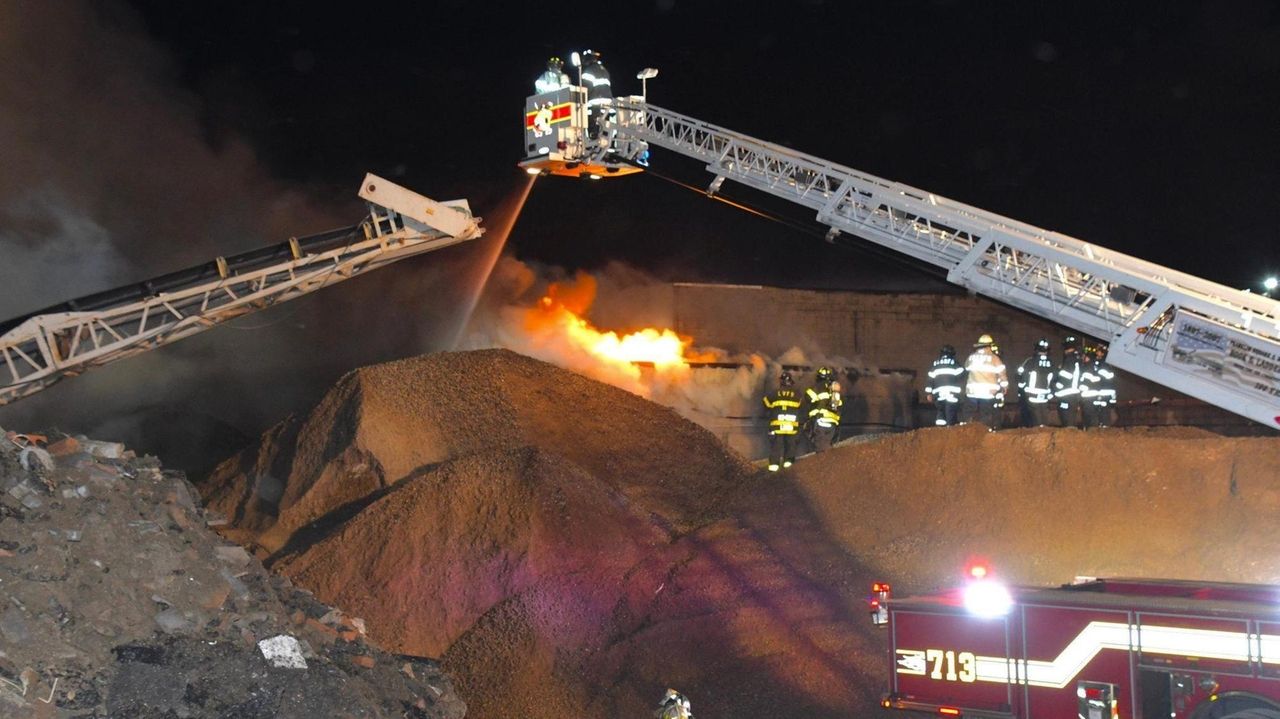 A "massive" fire at a Westbury trash facility that disrupted service on the Long Island Rail Road has been contained, a Nassau fire official said Thursday. The fire first was reported at 8:48 p.m. Wednesday at Jamaica Ash and Rubbish Removal on Covert Lane. Credit: Howard Schnapp/Paul Mazza

As towering flames lit up the night sky above Jamaica Ash and Rubbish Removal, firefighters by the hundreds, from nearly every Nassau department, and even some in Suffolk, battled the blaze in shifts.

Billowing smoke churned up from burning trash, as well as the risk of structure collapse and the late hour, made the two-hour shifts necessary so the more than 300 firefighters could catch a break and a breath.

"It went far past a fifth-alarm assignment. With the roof partially collapsed, we couldn’t put people in there and there were heaps of garbage obstructing access" said Tim Placilla, a Nassau assistant fire chief. "Once we got there, we realized the fire had grown exponentially with a heavy fire load."

Westbury fire dispatchers called on all available firefighters to respond to the fire shortly before 9 p.m. at the industrial park, but adjacent to a neighborhood of homes. And if that was not enough, a Garden City house fire Thursday morning led some of the firefighters to leave Westbury and head to the neighborhood just over four miles away.

"This was a very large building with a large volume of garbage and bails of corrugated cardboard," Placilla said. "Once the fire got into that, it was very difficult to get into and they’re still there trying to put it under control."

Nassau County Executive Laura Curran heaped praise on firefighters for simultaneously battling and coordinating response to the Westbury fire and the one in Garden City.

"Battling this blaze was a monumental effort requiring skilled, around-the-clock coordination between the Nassau County fire marshals and local fire departments from both Nassau and Suffolk," Curran said. "Municipal cooperation and seamless communication was key to containing the fire. I thank the hundreds of first responders who put their lives on the line to save life and property."

Fire departments from Suffolk, including Lindenhurst, Greenlawn and Copiague, responded with trucks or engines and four to six firefighters per vehicle. Crews continued to battle the fire Thursday afternoon using payloaders to lift and clear smoldering debris.