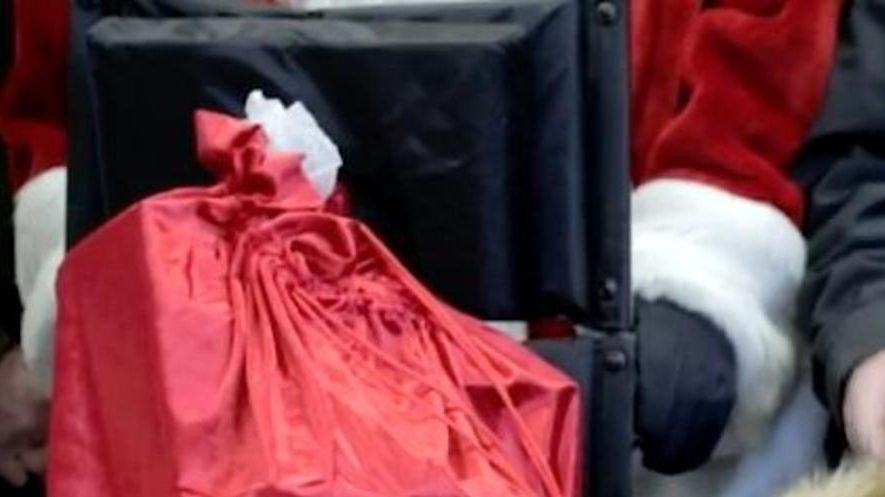 At his Freeport school on Wednesday, Dec. 20, 2017, Santa brought Weslie Capellan, 11, the gift of a new wheelchair, thanks to a Long Island manufacturing company, Nassau County police and other charitable organizations. Credit: Yeong-Ung Yang

Every day at recess, Weslie Capellan plays soccer with his friends on his knees.

His wheelchair is old, the brakes are broken and the seat reclines at random. So he plops himself on the ground and “crawls” to play goalie, the sixth-grader from Freeport said.

But Weslie now has a new competitive edge, thanks to a gift from a Long Island manufacturing company, Nassau County police and other charitable organizations.

“Does it go fast?” the boy asked as he felt the plush seat of his new wheelchair.

Weslie, 11, has clubfoot, a birth defect affecting both his legs, his mother, Jatnna Peralta, said. He can’t walk or extend his legs, she said.

Members of the Detectives Charitable Foundation learned about Weslie in October, when they came to the Caroline G. Atkinson Intermediate School in Freeport to host a coat drive. John Conley, the foundation’s chairman, asked school administration if they could think of any deserving children in need, and principal Connie Velez didn’t have to think twice before mentioning Weslie.

Weslie is always smiling and “lights up the room with his humor,” said his teacher, Maria Ball.

“The kid is terrific,” Conley said. “I can’t think of someone better to do this for.”

The foundation collaborated with the Children of Hope Foundation and Drive Medical, a medical equipment manufacturer in Port Washington, to get Weslie a new wheelchair, worth about $1,700. Nassau County police helped arrange a special visit from Santa to present it to him.

On Wednesday morning, Weslie waited expectantly outside his school with his mother, teachers and Nassau County Police Commissioner Patrick Ryder as Santa pulled up in the back of a pickup truck, flanked by two members of the motorcycle platoon who had their sirens blaring.

The man in the big red suit handed Weslie a big red sack stuffed with a soccer ball, a Lego set and other gifts before presenting him with his new wheelchair.

“I want to thank everyone in this room,” Weslie said after unwrapping his presents.

Peralta, 30, wiped the corners of her eyes as she looked over at her son.

“I feel so blessed,” she said.