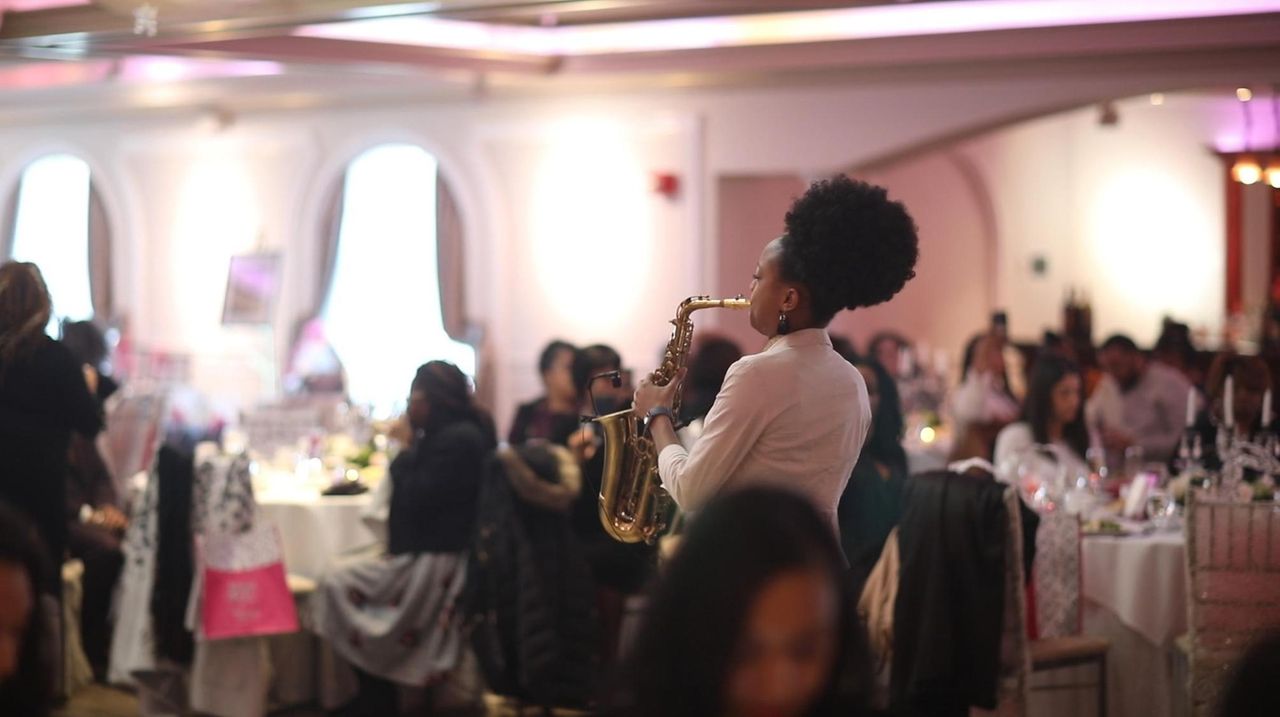 The Cedarmore Corporation, of Freeport, held a benefit in Syosset for "Girlz Talk" on March 7.  Credit: Newsday / Shelby Knowles

Women who believe in paying it forward and empowering youth gathered Saturday to raise money for programs like Girlz Talk and honor the legacy of its founder, Cynthia Perkins-Roberts.

Perkins-Roberts, who died of cancer last year, remained on the minds of many of the 150 attendees who went to Syosset’s North Ritz Club for “Lifting as We Climb — A Benefit for Girlz.”

“This is her vision. What I’m trying to do is to keep it going,” said Jacqueline Harris, a friend of Perkins-Roberts and program director at the nonprofit Cedarmore Corporation. “I don’t want it to die with her.”

The eighth Girlz Talk at Hofstra University will be March 28, with speeches, workshops and conversations that focus on personal and academic growth. This year's theme is “Shine Brite Like a Diamond,” featuring successful women in the fields of science, technology, engineering and math.

Jessie Garcia, the associate director of conference services at Hofstra University, still remembered the day when Perkins-Roberts approached her about hosting the daylong event.

“It was almost like her passion was infectious,” said Garcia, 43, of Deer Park. “It’s very much focused [on] that one-on-one engagement. It’s about you. It’s about how to make you feel special. Who can reject that kind of idea, passion and energy? It’s unstoppable.”

Adejah Wood, a Uniondale High School senior, has attended the past five Girlz Talks since her godmother, Alicia Ray, introduced her to the event in 2015.

“This program has changed me for the better,” the 17-year-old said. “I love the environment. I love how I feel when I am there. It’s an awesome feeling to just be around other girls.”

Wood, who plans to attend college in the fall to study culinary arts, said she appreciated the space at Girlz Talk to be herself and the opportunity to be vulnerable with others who share her experience.

What stood out for Simone Ross, 45, of Queens, from a parental perspective was a financial literacy workshop called “I’m a mom not an ATM” when she took her then-12-year-old daughter to the Hofstra event about eight years ago.

“It was essential because kids at 12 don’t really understand or appreciate money and how money just appears,” Ross said after a laugh. “It also helped parents talk to their kids about money, not just saying yes all the time or saying no all the time but actually making them understand how this works.”

Since becoming a volunteer, Ross also remembered seeing moments of sincerity and vulnerability during workshops, training sessions and conversations.

“We have moments where the girls are really vulnerable, and they let out things that they may not be able to let out at home,” Ross said. “So many of them are finally in a space where they can just breath, share, not feel judged and get some good advice.”

The registration fee for the program is $25, but Harris said: “Some girls don’t have the money, and we can’t do it for free. So we need people to contribute.”

At the end of each Girlz Talk, the teens would be presented a special gift — a set of pearls — as part of the “transfer of power” ceremony.

“The pearl symbolizes power,” said Harris of Freeport. “We have accomplished women, whom we deem leading ladies of Long Island, … put them on their neck to transfer the power so they can take the mantle and go and excel in what they want to do.”

1:25
Doctors disagree on whether Cuomo's decision to lift restrictions is wise
1:19
Students organize rally against anti-Asian crimes
3:19
No criminal charges for many drivers in crashes that kill pedestrians, bicyclists
2:22
Long Island towns and cities getting into the weeds on NY marijuana law
Comptroller: Long Beach relying on 'one shot revenues' to balance budget
1:10
Couple seeks cure for 2-year-old with rare disease
Didn’t find what you were looking for?