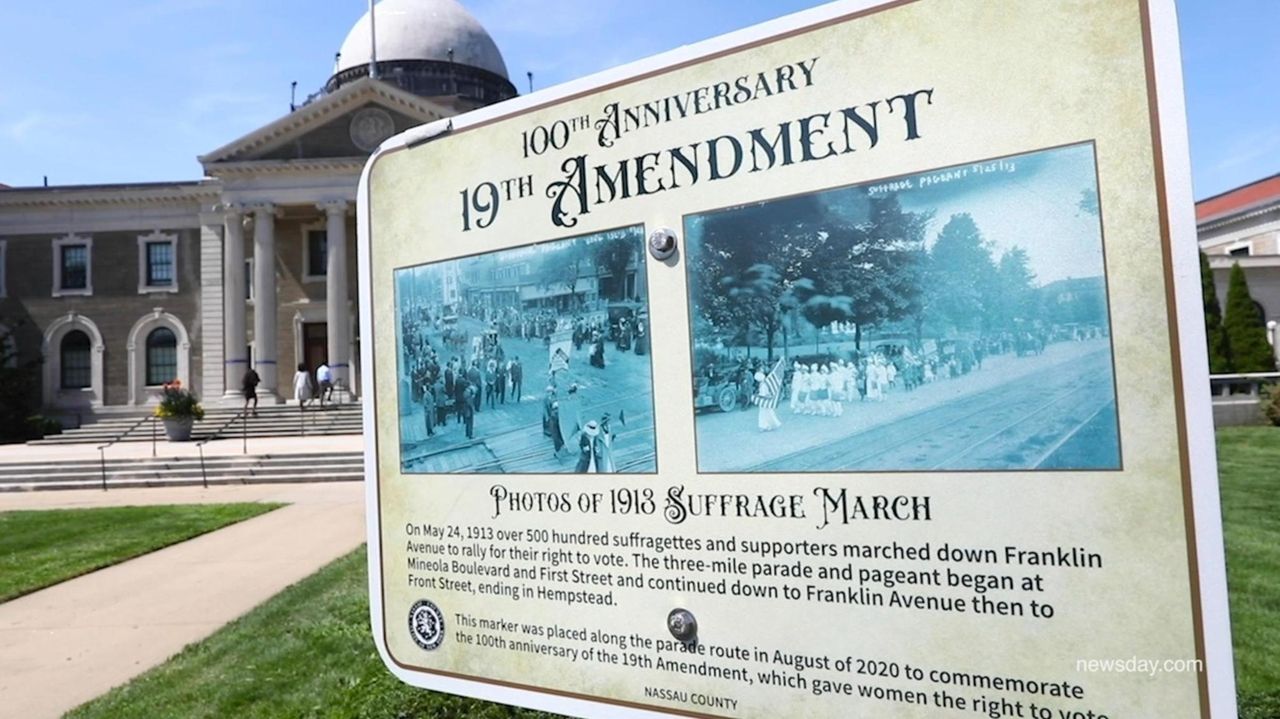 The sign dedicated Wednesday in front of Nassau's legislative building is a slice of women's suffrage history on Long Island.

On it are two black and white photographs from another era. One shows several women clad in long white dresses and leading a parade in Mineola 1913; the other depicts a throng gathered to witness the historic event.

"Right here, on this spot, along this road, there was a parade for women's suffrage right where we stand," said Nassau County Executive Laura Curran. On Wednesday she unveiled the sign in front of the county's Theodore Roosevelt Executive and Legislative Building commemorating the 100th anniversary of the certification of the 19th Amendment, which gave women the right to vote — though not all women could exercise the franchise then.

Curran said the march, held May 24, 1913, "was the first of its kind on Long Island." She said more than 500 women and men gathered at Mineola Boulevard and First Avenue in Mineola, "just down there, by the train tracks," Curran said, pointing as she stood outside the executive building on Franklin Avenue in Mineola.

The procession "continued down Franklin Avenue to Front Street in the Village of Hempstead … It was a 3-mile parade and pageant organized by a famous Long Island suffragist by the name of 'General' Rosalie [Gardiner] Jones," Curran said, and it was met by 5,000 spectators. Jones had the title "general" because of her following, according to historians.

Attending the unveiling was Antonia Petrash of Glen Cove, a historian who has written a book about women's struggle to gain the vote, "Long Island and the Woman Suffrage Movement."

"So many of the women who were very influential in the movement came from Long Island," Petrash said, citing among them Edna Buckman Kearns of Rockville Centre and Alva Vanderbilt Belmont from Sands Point.

Curran noted it would be another four years after that march before women in New York gained the right to vote — in 1917 — and another three years after that before every state allowed women to vote.

The 19th Amendment, which gave women the right to vote, was passed by the U.S. House of Representatives May 21, 1919, and by the U.S. Senate two weeks later. Tennessee became the 36th state to ratify the amendment on Aug. 18, 1920, which led to its certification on Aug. 26, 1920, the centennial anniversary that Curran acknowledged.

But the amendment, which culminated after a decadeslong struggle that began in the 19th century, still did not mean every woman could vote.

"Decades of struggle to include African Americans and other minority women in the promise of voting rights remained," said an explanatory note on ourdocuments.gov website, a cooperative effort among National History Day, The National Archives and Records Administration, and USA Freedom Corps. "Many women remained unable to vote long into the 20th century because of discriminatory state voting laws."

Curran and other elected officials who spoke at the sign unveiling urged citizens to exercise their right to vote.

"So we remember the struggle of the suffragists, all the obstacles that they encountered paving the way for women to make other landmark achievements," said Curran, Nassau's first female county executive. “People have died for the right to vote. I hope that this marker serves as a reminder of how important it is to vote."

1:16
'Relief, but not a celebration': LIers respond to Chauvin guilty verdict
Top photos from around LI from April 2021
See photos from the scene of the Stop & Shop shooting
1:21
LIer makes mask chains, feeds the hungry from 9/11 until now
2:08
Nassau police: Suspect in fatal Stop & Shop shooting captured
State: NY's COVID cases continuing to decline
Didn’t find what you were looking for?