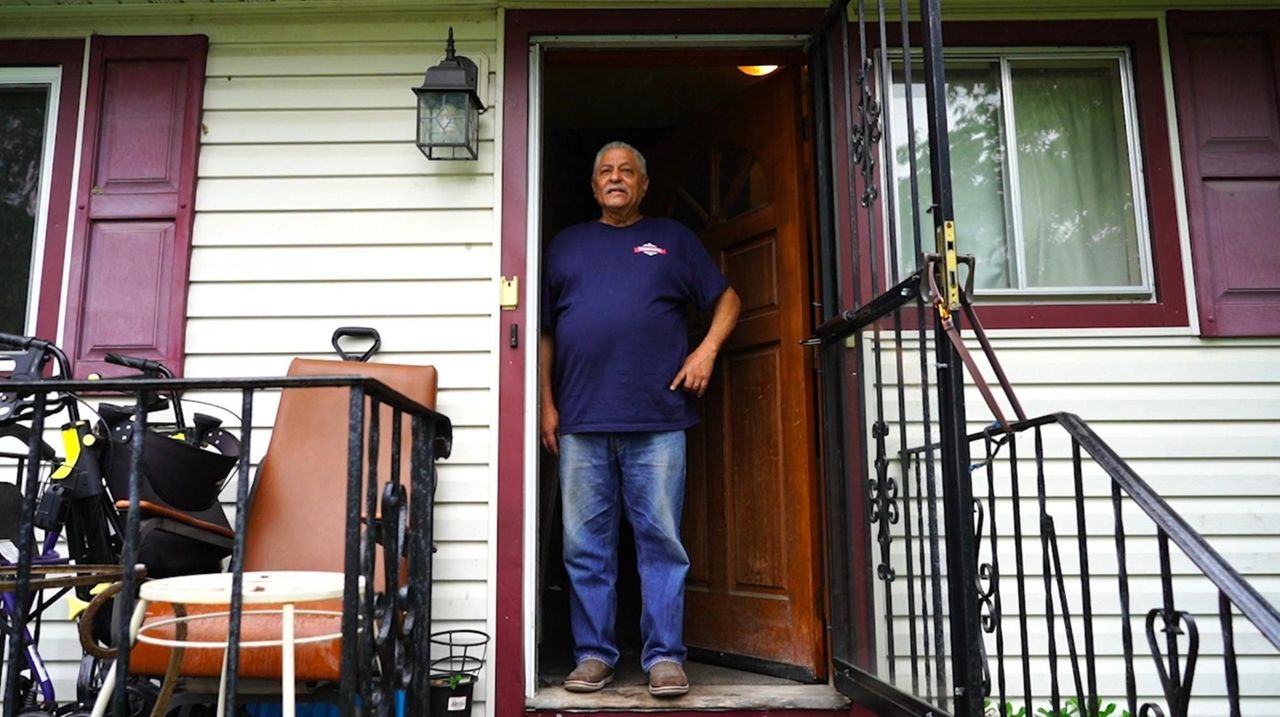 The United Way got CARES Act funding, and some funding under the newer American Rescue Plan, which has helped the agency reach clients such as Vicente Guzman, of Bay Shore. Credit: Debbie Egan-Chin

"First, I was looking for food," Guzman, 70, said during a recent interview at his Bay Shore home. "I was really sick at the time," he recalled about operations to implant stents after two heart attacks, and treatment for cancer. He said his retirement check didn't go far enough to meet all of his and his wife's needs.

Guzman turned to a local human services agency, Pronto of Long Island, a nonprofit based in Bay Shore. Pronto was able to draw on its partnership with the United Way of Long Island to assist him.

Several local nonprofits benefited from federal stimulus programs — the CARES Act last year and the American Rescue Plan approved this year — that local governments received and funneled to them to aid residents.

Nassau County is proposing to provide $18 million in grants, stemming from its American Rescue Plan appropriation, to health and human service providers and nonprofit groups.

The United Way of Long Island has received about $1.1 million for its Safe at Home for Seniors program, from several local governments, to aid seniors during the coronavirus pandemic.

1,300 seniors have been assisted through the United Way's program since its launch last summer.

United Way, the nonprofit whose programs focus on health, educational and financial stability, has been able to reach clients such as Guzman during these difficult times through federal stimulus dollars. The agency benefited from the CARES Act last year and the American Rescue Plan this year — with money being funneled through local or state government into various programs.

Nassau and Suffolk counties also have given or are proposing to give more of their federal stimulus dollars to local nonprofits, as the region pushes to rebuild from the COVID-19 pandemic.

The Town of Islip — where Pronto and Guzman are located — provided the United Way with a $100,000 Community Development Block Grant for its Safe at Home for Seniors program, town spokeswoman Caroline Smith said.

Guzman said the air purifier he received through United Way's program was an important piece of equipment that helps him breathe, pointing out the "problems with my lungs." He said cancer had returned and "this time it was touching my lungs." The air purifier means clean air as he sleeps, he said.

"When he initially came in, he came in for food distribution. And we supplied him, just like we supply all of our clients, with two to three days' worth of food assistance for him and his family," said Marc Soto, Pronto's executive director, speaking of Guzman. "And then he asked us about assistance with his medical condition," which led to the agency enrolling him in Safe at Home for Seniors.

The seniors program provided Guzman with the HEPA air filtration unit. Soto and Lynn said Guzman received other medical equipment, such as a blood pressure cuff and irregular-heartbeat monitor. Pronto gives Guzman food cards to a local supermarket, or sometimes an agency case manager shops for him.

Earlier this year, when it was difficult to get a COVID-19 vaccination appointment, workers in the seniors program got Guzman and several members of his family appointments. Guzman said he had gotten nowhere when he tried on his own, and he's grateful.

"I really appreciate what the United Way … [does] for me," Guzman said. "They keep on calling me. 'Vicente, do you need anything? Do you need transportation? Do you need to go to the doctor?' They offer me all those things. … That’s a beautiful program."

Nassau hopes to dole out $18M

Nassau Executive Laura Curran has proposed that $18 million of the county's appropriation from the American Rescue Plan go toward grants to health and human services providers and nonprofit groups, according to information provided by Curran's senior adviser, Jordan Carmon. The county previously has aided other programs, such as local food banks, to step up food distribution programs during a time of unprecedented need.

David Nemiroff, president and chief executive of LIFQHC, or Long Island Federally Qualified Health Centers — which operates seven centers in Nassau, plus three school-based health centers — said it was aided by a $4.2 million Paycheck Protection Program loan. The money, along with $1.2 million from the CARES Act, helped the centers resume with full staffing after the pandemic lockdown caused service and staff reductions. Nemiroff also expects more assistance through the American Rescue Plan.

"We took a large hit last year, closing down for certain services, such as dental," Nemiroff said. "We lost probably $3 million worth of visits. That was significant for us."

He said the stimulus money "helped us stabilize the situation and do more outreach to the community. … Without it, we would not have been whole last year."

Regnante said the federal money wasn't just handed to the United Way. "Everything that we have received, we applied for competitively," she said, such as for county and town programs.

In addition, Regnante said, "We are applying for grants that are being developed through the different federal and state entities. For instance, the Centers for Disease Control issued a request for COVID vaccination education campaigns around the country. We were awarded a $70,000 grant [last month] for that work."

Regnante added, "There could be 500 applications for 100 projects. … When you're competing for federal money, Long Island's demographics don't necessarily bode well. We're competing for the same pot of money as the Bronx. But the Bronx can outperform us, in relation to demographics, because of either the preponderance of people who are underemployed, lower income, Black and brown residents.

"For a suburban community to get this money out of Washington, you have to know how to write these grants to get the money and how to compete," she said.

Can vaccine holdouts on Long Island be swayed?
'Moulin Rouge! The Musical' sashays home with 10 Tonys
CDC director: Booster shots were expanded 'to stay ahead of the virus'
3:52
Gabby Petito's father: 'Her nature was always to smile'
Judge dismisses residents' lawsuit against Jake's 58 casino
Suffolk led NY in vehicle-related fatalities, crashes last year, data shows
Didn’t find what you were looking for?