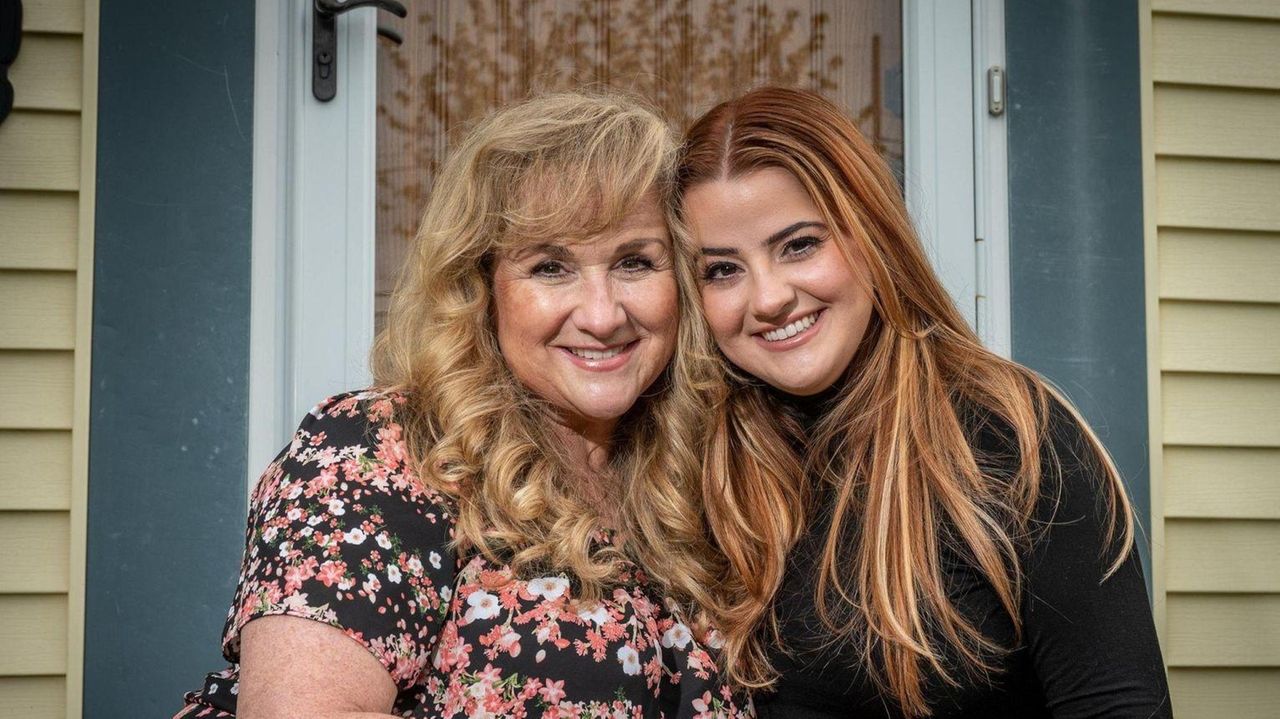 Carolyn Brady followed her mother, Lori Brady, into nursing, and the two have battled the coronavirus at Mount Sinai South Nassau Hospital in Oceanside. On Frida, Molloy College in Rockville Centre, where both had graduated, announced a scholarship in honor of the Bellmore nurses that will provide $3,000 each year to a student who is a child of an alumnus. Credit: Newsday / John Conrad Williams Jr.

Carolyn Brady followed her mother, Lori Brady, into nursing, and together the two have battled the coronavirus at Mount Sinai South Nassau Hospital in Oceanside, helping each other through the heart-wrenching, exhausting and ultimately uplifting work.

On Friday, in one of those Mother's Day blowouts people dream of, the mother and daughter from Bellmore were featured on the "Today" show. And Molloy College in Rockville Centre, where both had graduated, announced the Brady Legacy Grant in their honor that will provide $3,000 each year to a student who is a child of a nursing alumnus.

Throughout the COVID-19 pandemic, Lori and Carolyn have leaned on each other to get through the long hours, the stress and, during the most frantic months, the many deaths that passed before them.

Fearful that they would bring the virus home with them, the two slept in the same bedroom of their home on Croydon Drive.

"Sometimes, we just looked at each other and cried," Lori Brady said.

They set up a portable "decontamination station" on the back porch, where each would remove their work clothes and put them in the washing machine.

The story of these front line health care heroes starts with Lori Brady's dedication to a profession she calls an "internal calling." She has served 34 years on the floors of the Mount Sinai hospital.

Growing up in Merrick, she recalled that when she was 8, her father, an NYPD officer stationed in the Bronx, was attacked by five men who stabbed and shot him.

She remembered the terror on her mother's face, having recently given birth to her third child and not knowing whether her husband would live. She remembered not being allowed to go in the hospital, and she remembered, when her father recovered, the role the nurses played in saving him.

"On that day I decided that no one was going to keep me out of a hospital, and that I was going to do everything I could to save everyone else's mom or dad," she said.

Carolyn Brady, for her part, said she didn't want to pursue nursing at first. She loved doing school plays and dreamed of being an actress. At the same time, she often saw her mother jump in to help someone who was hurt — at Disney, on a plane, in a parking lot, she said.

Then came the Imperial Diner incident. The family was dining in the Freeport eatery when a little girl, rambunctiously running around the place, ran smack into a server and hurt her head. Both mother and daughter rushed from their seats to help. And that was when, Lori Brady said, she realized her daughter was going to be a "colleague."

Carolyn Brady started work in April of last year at Mount Sinai South Nassau Hospital, just as the virus was pummeling hospitals across the state. The hospital that typically held 350 beds surged to 500 beds, the overwhelming majority with victims of the virus.

Over time, the hospital brought in three refrigerated, boxcar-size containers to hold the dead.

"We were really overrun," Lori Brady said. "It was terrifying, the amount of death and suffering."

Her mother, being a hospital veteran, shifted among multiple assignments, caring for patients and making phone calls to keep desperate families, who were not allowed to visit, up on the latest with their loved ones.

She was the perfect person for the job, said Stacey Conklin, senior vice president and chief nursing officer at Mount Sinai South Nassau.

"Lori helped to connect with loved ones," Conklin said. "That really was her niche."

On one call, the daughter of a patient asked Lori Brady to pray with her father. When she entered the man's room, she said, "the poor man was on death's door." She said the Lord's Prayer beside him, and left a prayer note by his pillow.

"Four days later I saw the man's name come up on a call sheet," she said. "The prayers worked. He was going home in a week."

Back at home, mother and daughter supported each other, bonding even closer.

"We were there to hold onto each other," Lori Brady said. "We know how fragile life is."

Carolyn Brady, for her part, said her mother "understood what it was like in a way that no one else could."

Then came Friday on the "Today" show. As the mother and daughter were interviewed, a black limo pulled up and out popped Al Roker with a basket of bath gifts.

Then the limo drove them to a day spa, where, Lori Brady said, "We giggled the whole time, like we were movie stars."

"She really is an earth angel," the daughter said during the "Today" show, her mother beside her. "She's speaking with families that are so distraught, having such difficult conversations, with such grace, such kindness."

"You're going to make me cry," her mother said.