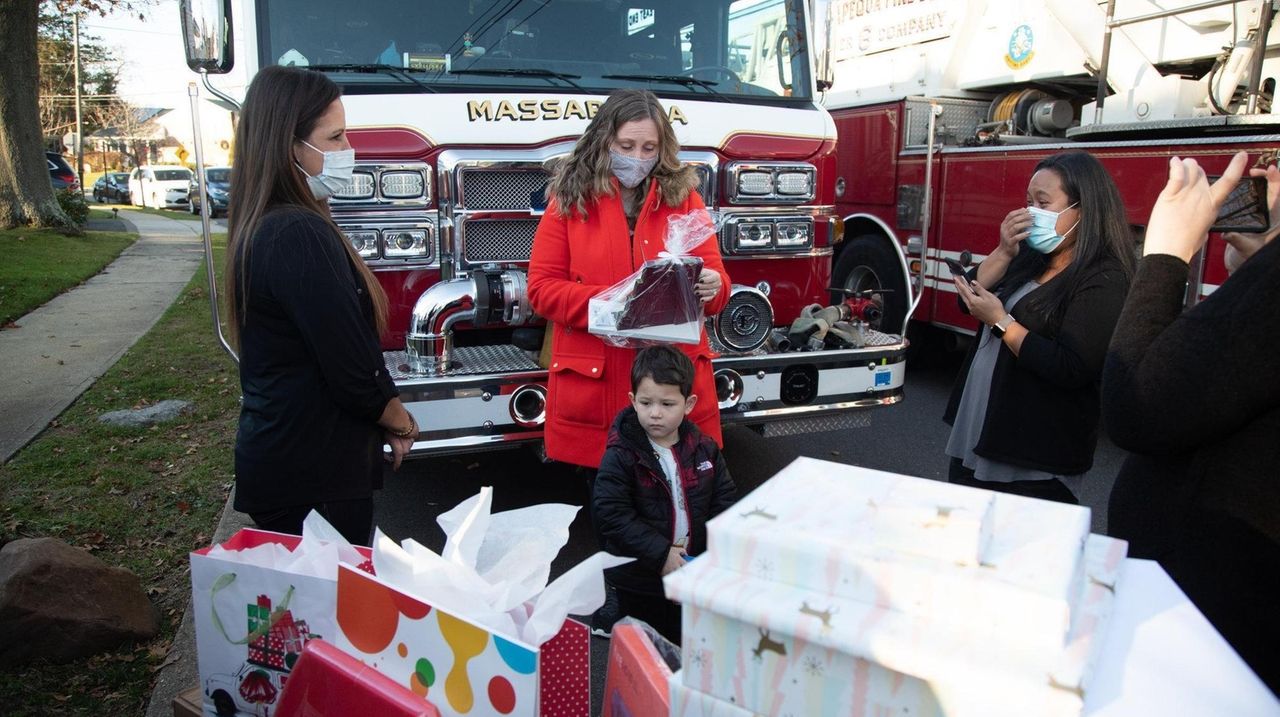 Massapequa resident Chrysta Cataldo, creator of the charitable group, Gifting for a Brighter Tomorrow, joined other volunteers Sunday to give thousands of dollars worth of presents to the family of NYPD Det. Raymond Abear, 43, who died in the spring of the coronavirus.  Credit: Kendall Rodriguez

A Massapequa woman and other volunteers gave gifts Sunday to the family of NYPD Det. Raymond Abear, 43, who died in the spring of the coronavirus.

The gifts were picked up by the late detective's wife, Catherine Abear, who brought along the couple’s 3-year-old son and 1-year-old daughter to Massapequa.

There was a bicycle for each child, an iPad, a ball pit, a seesaw, a PAW Patrol watch, snow boots and more. The thousands of dollars worth of gifts came from an 1,100-member group that Chrysta Cataldo, of Massapequa, created called Gifting for a Brighter Tomorrow, which also exchanges presents among members.

"We picked this NYPD officer, and we bought them everything that they wanted," Cataldo said, adding of Catherine Abear: "I just want to brighten her holiday a little bit. I just want to make her life a little easier for the holidays, so that she doesn't have to go out and buy gifts for her kids."

As of early October, 46 deaths of NYPD personnel had been linked to the coronavirus, and they were remembered that month at a memorial ceremony at St. Patrick’s Cathedral. Among the dead were custodians, traffic agents, communications specialists as well as auxiliary officers, police officers, detectives and a chief, according to the NYPD, which has said about 1,800 cops have tested positive for the coronavirus.

Across New York State, at least 641,161 people have contracted the virus, with at least 26,588 deaths, according to the latest numbers provided by Gov. Andrew M. Cuomo's office.

Other agencies that deal with the public have also sustained casualties. At the Metropolitan Transportation Authority, 126 of its personnel have died from the virus and thousands were sickened, the agency has said.

Raymond Abear, who lived in Queens, joined the NYPD in July 2001. He had been assigned to the Special Victims Squad, according to a statement issued in the spring by his labor union, the Detectives’ Endowment Association.

Among the gifts Sunday were wrapped presents for Catherine Abear — who hadn’t yet opened them, so Cataldo didn’t want to ruin the surprise by telling what was inside to a reporter.

Upon being presented with the gifts Sunday, Abear said: "We miss Ray very much, and this is all so kind and generous. It’s so overwhelming for us."

The gifts were purchased through Cataldo’s group, using a wedding registry on Amazon so donors could pick presents to buy for the family.

Cataldo, 36, who overcame cancer, said she was motivated to help the family having lived through tough times herself.

"I know that I’ve been in a place where I couldn’t help myself, and I always remembered that feeling that I had when I was sick, so I know that she’s in a very hard time right now," Cataldo said from behind a face mask, "and just even if it’s the littlest thing I want to do something nice for someone who needs us."