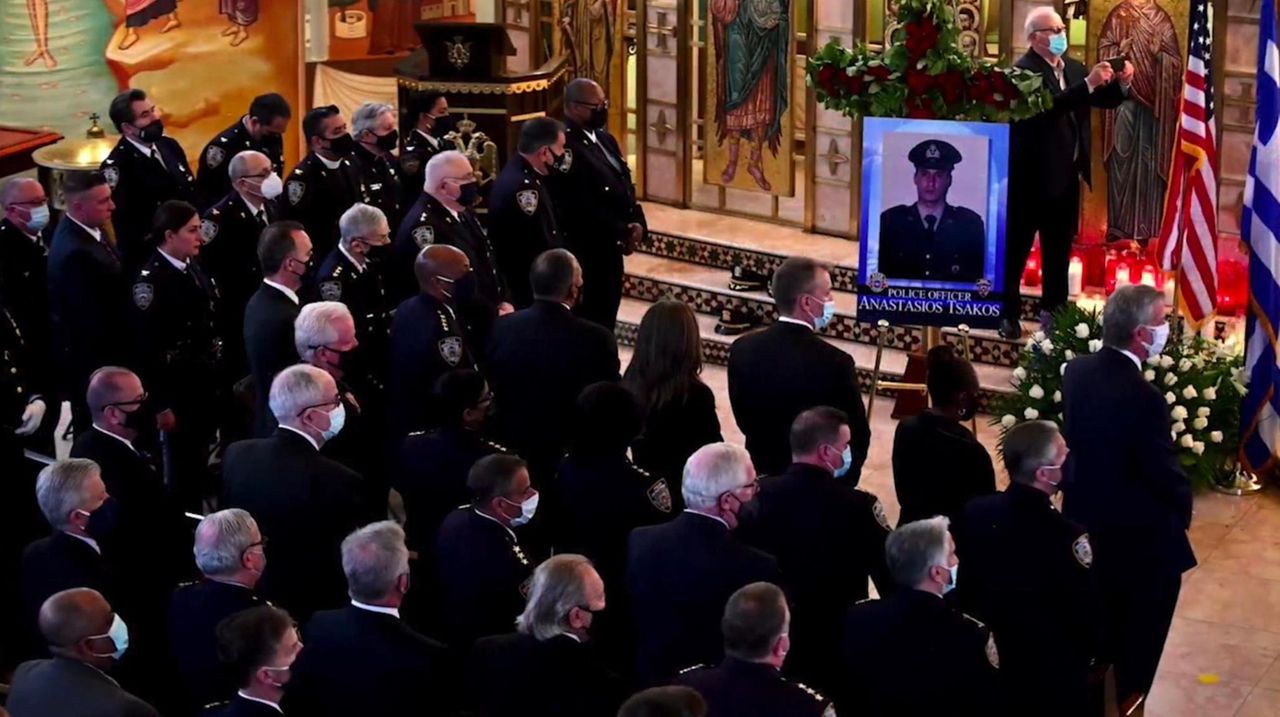 This story was reported by John Asbury, Robert Brodsky and Michael O'Keeffe. It was written by Brodsky.

Anastasios Tsakos will never be forgotten.

Not by his young children who would scream with joy every time his Harley Davidson roared into the driveway of their home in East Northport. Nor by his brothers and sisters in blue in the NYPD who admired Tsakos, who was struck and killed on the job last week by an allegedly drunken driver, for taking on every assignment with courage, grace and humor.

And not by his wife Irene, who told a crowd of mourners Tuesday at Saint Paraskevi Greek Orthodox Shrine Church in Greenlawn that she would thank God every day for her "other half" and the man who made her life complete.

"I wish we could grow old together," she said. "That was the plan. But he was taken from us too soon. And now our kids will grow up without their dad. Without their awesome dad. I will be sure they know who he is. Every day they will see his face. And learn about all the wonderful things he did. And what a hero he was. They will never forget. I will make sure of that."

Turning to her husband's coffin, Irene offered a final message to the man affectionately known as 'Tasso.'

"You are the love of my life," she said through tears. "I hope I made you proud. Lord, you have my angel now. Please hold him dear. And allow him to watch over us. I love you always and forever. Till you hold me in your arms again, my love."

Thousands of law enforcement from across the state came out to honor Tsakos, a member of Queens' elite Highway Patrol Unit who was remembered for his steadfast honesty, deadpan sense of humor and an unwavering commitment to helping others.

Outside the church, supporters waved signs supporting the NYPD while a giant American flag hung over Pulaski Road. Inside the church, photos of the 14-year department veteran in uniform flanked his casket.

NYPD Commissioner Dermot Shea described Tsakos as the "perfect depiction of the American dream" — a man who came from humble beginnings and spent a lifetime in service of his country, his community and the city he protected with his life.

Tsakos made nearly 200 arrests during his career, chasing down drunken drivers, recovering stolen vehicles and testifying in court on his own time to ensure justice was brought against those who broke the law, Shea said as he posthumously promoted him to detective first grade.

The commissioner presented Irene Tsakos with her late-husband's shield, embracing the widow as 3-year-old Stavros gently played with the white flowers on his father's coffin.

New York City Mayor Bill de Blasio said he's struggled to make sense of Tsakos' death — how a man so profoundly decent, who would extend a helping hand to friends, sick neighbors or a stranded motorist in need of assistance — could be torn away so soon.

"The city is mourning a lost guardian," the mayor said, urging lawmakers to increase criminal penalties against motorists who drive drunk and injure people. "A man who did everything right. It does not make sense how someone could live his life right in every way and be taken from us so horribly."

Greek Orthodox Archbishop Elpidophoros called Tsakos a "guardian angel" who would look over his multiple families.

"I cannot explain why the life of Anastios Tsakos was required in this moment," he said. "But I do know that neither his life nor his death were in vain. We are better people because he was the best of us."

Tsakos, 43, was fatally struck as he directed traffic on the Long Island Expressway in Queens in the early morning hours of April 27 after responding to a separate fatal crash.

The driver, Jessica Beauvais, 32, of Hempstead, who reportedly told detectives she drank wine and tequila and smoked marijuana before the crash, has been charged with 13 counts, including second-degree aggravated manslaughter and vehicular manslaughter.

A judge last week ordered Beauvais, who was driving with a suspended license, to be jailed without bail following her arraignment. Tsakos' death is the first this year of an NYPD officer on duty.

Tsakos got a degree in aviation administration from Dowling College with a goal of flying a helicopter. He would later obtain a pilot's license, flying a small plane out of MacArthur Airport in Islip.

After college, Tsakos returned to Greece, fulfilling a commitment to serve in the Greek Army, and was quickly promoted to second lieutenant. He joined the NYPD in January 2007 and served time in the 75th and 83rd precincts, both in Brooklyn, before being promoted to Highway Patrol in August 2014.

"Highway patrol was the perfect fit," Shea said, noting that Tsakos did not call out sick once in the past decade. "He was a dedicated and extremely productive guardian of the road. He made a difficult job look easy."

But while Tsakos earned a reputation for professionalism, he would shy away from personal accolades, Shea said. His goal was simple: stay late and finish the job and race home to be with his family.

Irene Tsakos said her husband would build cardboard houses to play with the kids, tell funny bedtime stories that would keep them up too late and comforted them when they'd have a nightmare. He taught Stavros the name of all of his tools and allowed 6-year-old Eugenia to dress his hair.

"Our family was his biggest pride and joy," she said. "He would often tell me 'Babe, I wake and I sleep with you and the kids in mind. Everything I do, I do it for you.'"

Mourners filed out of the church in silence shortly before noon, while a pipe band and trumpeters stood by to play taps. An NYPD guard led the procession carrying Tsakos' coffin, draped in the green and white NYPD flag, while Elpidophoros waved smoke from incense and led an Orthodox chant. Five helicopters flew over the procession as Tsakos' body left the church for its final stop at Northport Rural Cemetery

"It’s a very sad day," Nassau Police Commissioner Patrick Ryder said. "You have a father and son and now he’s got two children who are going to grow up without a father now. … We’re going to be out here rain or shine, we’ll be out here and support an officer who died in the line of duty."

John Mangan of Levittown, a retired NYPD officer, stood across from the church holding a sign reading "God Bless the NYPD."

"Being a police officer is a very difficult job to do out there and it is getting more difficult," Mangan said. "Cops go out there and risk their life. They have to make split decisions that can cost them their lives or their careers."

For the Tsakos family, the pain from the loss of their loved one may never truly heal, but the legacy of his heroism, de Blasio said, will last a lifetime.

"Your father was a hero," the mayor told Eugenia and son Stavros. "And now the whole world knows it. And you will know, even in the most painful moments, even in moments of doubt, that you were born of a hero. That hero will be watching out for you every day of your life."

See photos from memorial services for NYPD officer Anastasios TsakosNYPD Officer Anastasios Tsakos, who was killed, allegedly by a drunken driver, on the Long Island Expressway in Queens last week, was remembered during memorial services on Monday and Tuesday. Hundreds pay respects to fallen NYPD cop from East Northport "That family just inherited ... 35,000 moms and dads for those kids," said Lt. John Pappas, commanding officer of the city's Transit Bureau K-9 unit, during the wake for NYPD Officer Anastasios Tsakos. Charity to pay off mortgage of NYPD officer from LI killed by alleged drunken driverThe Tunnel to Towers Foundation on Friday told the widow of NYPD Officer Anastasios Tsakos that the charity would pay off the outstanding mortgage on the family's East Northport home. 'He had his whole life ahead of him': Brother remembers fallen NYPD officer from LI"My brother was an amazing guy," Teddy Tsakos, 42, said in a phone interview with Newsday as he prepared to board a plane to New York from North Carolina. "He had his whole life ahead of him. It was cut short."